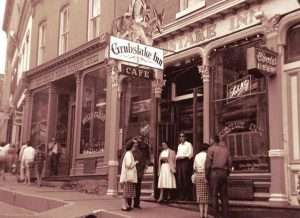 A shooting occurred at 1:00 a.m., Thursday morning, injuring Bernard McGraw, 35, address unknown. McGraw was taken to Boulder Community Hospital by Lauri Lyn Brasher, address also unknown. McGraw underwent surgery for a gunshot wound to his elbow. McGraw was allegedly shot by Don Bishop, 47, of Gilpin County. Bishop was taken into custody and is being charged with first degree assault.

The Gilpin County High School football team won their first game on September 3, defeating the Dayspring Eagles 30-8. Rick Woodcock started the scoring for the Gilpin Eagles when he intercepted a Dayspring pass and returned it for a touchdown. The Gilpin defense played a good gamed led by linebackers Trent Cate, who had seven solo tackles, and Todd Crawley, who had 10 assisted tackles. Nose tackle Guy Jones assisted on seven tackles. Offensively for the Eagles, Mike Schwartz, tailback, rushed 16 times for 133 yards. Quarterback Darren Ward rushed 11 times for 106 yards and scored two touchdowns, one on a scramble of 45 yards. Fullback Robert Guiney scored another touchdown for the Eagles. The Eagles were penalized for 130 yards causing one observer to remark, “It wasn’t pretty, but it was a win.”

The Gilpin RE-1 volleyball team started the season right by defeating Bellevue 14-16, 15-8, and 15-11 on September 3. It was a real team effort with Gilpin coming from behind. A nice play by Kate Schwartz, diving to save a ball, got the team going.

Died: Services were held at Woods Mortuary in Golden, September 7, 1988, for Daniel A. Stone of Aspen Springs. Following the service, graveside services were held at Bald Mountain Cemetery. Born July 3, 1910, to Victor and Millie Anderson Stone, Daniel served in the Air Force in Europe during World War II. He was a professional philatelist (stamp collector). Stone was active in the local Community Action Program (CAP), an active Republican, a member of the Central City Elks, and a member of St. James United Methodist Church in Central City. He was an amateur historian of Colorado narrow gauge railroads and also ghost towns. Stone passed away September 2, 1988 at Lutheran Medical Center in Wheat Ridge. He is survived by his wife, Harriet M. Stone of Black Hawk; three children, Donald R. Stone of Palo Alto, California, Daniel K. Stone of Lakewood, and Signe K. Williams of Phoenix, Arizona, and four grandchildren. Those who wish may send memorial contributions to St. James Methodist Church.

Across the Crossroads, by A.F. Mayham: Every twice in a while the angel of the bottomless pit gets on the loose and enumerates a few muppets along his most intimate leeches including some past masters of dark deeds. Some have a carbonated manner of speaking and an umbrella might come in handy for the listener. Premature burial has been considered to fit some cases, particularly those whose mental age is considerably less than their chronological years and who delight in chauvinism and possess the power of being a positive stinker. In an attempt to be what they are not, they scrape the bottom of the barrel for adherents to the ancient order of brothers in falsehood to sip the purulent urn filled to repletion with the Satanic fluid and echo the echo down the line. Model translation: Knockers.

The Editor was extended a compliment on Wednesday, which is the most glowing one that could be given to anyone. He was told by an individual that if he had not used his influence for one candidate, that candidate would not have been given the designation in the Primary Election. Ye Gods, is the Editor so powerful and influential that he controls the destiny of each candidate? This remark makes it mandatory and decidedly necessary to buy a new hat, two sizes larger.

Couch Anderson and Will Welch left Sunday for a week’s fishing trip in Yellowstone Park.

Mr. and Mrs. J.B. Dougan, of Denver, visited Central City last Saturday. Mrs. Dougan will be remembered as Mary Hosking, who was born in Mountain City and spent her teenage years here.

Henry J. Stahl and L. Nathenson, of Denver, were up Tuesday to vote. Henry said that he and his wife celebrated their 53rd wedding anniversary last week. Congratulations, and we hope they will celebrate their Century anniversary.

Mr. Mrs. Alfred Goeke, of St. Louis, Mo., arrived Saturday and will spend and week at the McCoy home. Mrs. Goeke is a cousin of Mrs. McCoy and Jack Welch.

Through the efforts of Sheriff Floyd Campbell, the County has purchased a fire truck for use in fighting forest fires, and any fires outside the limits of Central City. It was purchased from the Colorado State Forestry Department at Colorado State University at Fort Collins, at a cost of $1,700. The truck is a 1953 four wheel drive Jeep, and has a ten gallon per minute high pressure pump, and carries a 150 gallon tank of water, and has a suction hose for refilling the tank in six minutes from a creek or lake.

Mrs. Ruth Williams of Seattle, Washington, spent several days with Mrs. Emma Eccker this week and visited other friends in the community.

Mr. and Mrs. Ray Hendricks left Tuesday for Missouri, called there by the death of Mrs. Hendricks brother in law.

Mr. Elmer Bennett, son in law of Jack Turner, has been appointed Under Secretary of the Interior by President Eisenhower. Mr. Bennett will replace Hatfield Chilson who recently resigned to return to practice law in Colorado.

Mr. and Mrs. Ben Backer and their nephew, George Miller, left Saturday for their homes in San Francisco. They spent the summer working with Ralph Backer at the Placer Mine on Clear Creek.

Died: Monday afternoon, Ralph W. Shafstall of Rollinsville, died very suddenly while at work. He and his step son, H.M. Mann, were having a coffee break wile painting a building at Thorne Lake, when the elder man toppled over and expired. Howe’s Mortuary at Boulder was called and Coroner Chas. Robins who pronounced the death caused by heart failure. Shafstall, who was 58, was buried Thursday at Dory Hill.

How to Make Strawberry and Rhubarb Jelly, by Nellie Maxwell: Strain enough stewed green rhubarb to give one cupful of juice. Soak two tablespoonful’s of gelatin in one quarter cupful of cold water for ten minutes. Place the cupful of juice with one cupful of pineapple juice over the heat; when boiling turn in the gelatin and add one fourth cupful of sugar to sweeten. Tinge with a bit of green coloring and when it begins to stiffen, drop in a few ripe strawberries which have been dipped in powdered sugar. Serve unfolded with cream and sugar.

Married: At the home of the bride, on Robinson Hill, below Black Hawk, September 1st, 1928, Rev. H.B. Morris, father of the groom, officiating, Mr. Alfred H. Morris and Miss Manetta Grace Bingham. The wedding was a pretty home affair, witnessed by relatives and a few friends, who showered congratulations on the couple and the wishes for a bright and happy future. The romance, which led to the beautiful ending, began while both parties attended the State Teacher’s College in Greeley, CO. The bride graduated from the Central City high school, is well known in this city and throughout the county, is a charming young lady, and has many friends who also extend congratulations. She was handsomely attired in a light green georgette dress and carried a bouquet of sweet peas and daisies, and was accompanied by her two nieces, Mary Alice and Delores Bingham as flower girls. After the ceremony, a delicious wedding supper was served by Mrs. Bingham. Those present were Rev. and Mrs. H.B. Morris, Mr. and Mrs. Raymond Bingham and children, Mary Alice, Delores, Jamie, and Raymond, and Mr. and Mrs. John Gilfillan, Mr. Ernest Adams, Miss Effie Adams and Miss Dorothy Morris. Mr. and Mrs. Morris will make their home in Denver for the present.

Mr. Robert C. Johnson, wife and daughter, left for Glenwood Springs Monday, to attend the session of the Pythian Sisters being held there.

John H. Reddin, a prominent attorney of Denver, was in Central several days during the week attending to legal matters.

Mrs. John Hooper and children returned last week from a 16 month visit with relatives in England.

Joseph Dennis and son arrived from their Middle Park ranch on Friday, bringing over 42 head of fine beef cattle for the local market.

Mr. James Miller, owner of the Miller Block in this city, as well as many mining properties in the county, arrived in Central from the east on Thursday evening’s train. This was his first visit since 1885, and he was surprised to see the many improvements made in the city since that time.

The first snow of the season visited this section on Friday and Saturday. It commenced Friday evening and continued for 27 hours, the greater portion melting as soon as it touched the ground. Fires in the homes, and overcoats, were necessary for comfort.

A wrestling contest, Cornish style, took place at Idaho Springs Monday evening, between John Rowett, of Michigan, champion of America, and Sid Varney, of Idaho Springs, champion of Colorado, which was won by Rowett in 20 minutes.

Last Saturday was the regular payday of the camp, and in the neighborhood of $100 was paid out for labor, supplies, and mining supplies.

Sam Haubrich, of Black Hawk, had his right arm broken the first of the week, by being accidentally struck with a hammer while at work in the Bobtail Tunnel.

Born: In Central City, September 12th, 1898, to the wife of Nels Nordquist, a daughter.

Born: In Central City, September 9th, 1898, to the wife of James Bowden, a daughter.

Professor Hill was treating some rich ore in his smelter in Black Hawk from the Copley Mine, up Silver Gulch near the smelter, which was returning from $500 to $1,000 per ton in silver.

Clear Creek Valley was visited by swarms of grasshoppers, which did considerable damage to the garden vegetables in that section.

Quite a number of men were sluicing on the “Patch” on Quartz Hill, and were averaging $5 per day. Scarcity of water was a great drawback, or bigger returns would have resulted.

The total vote of Gilpin County at the recent election was 1,514 and that of Clear Creek county was 765.

Mr. John Best, after two years residence in this city, had rented a store room in the McCool blocks and proposed to fit up one of the finest drug stores in the west.

The Narragansett Mine, on Gregory Hill, was being worked by E.J. Sweet and the ore was returning from 6 to 10 ounces of gold to the cord.

Two quarts of dirt from the St. Louis Mine returned $25 in gold by the panning process.

A miner named Petterson, who was working in the Clark-Gardner Mine on Quartz Hill, was drowned by holing into the Philadelphia-Colorado Company’s mine.

END_OF_DOCUMENT_TOKEN_TO_BE_REPLACED

Where the dead get to tell their story By Jaclyn Schrock On Saturday, August 21, the Gilpin Historical Society held their annual Cemetery Crawl. Tickets allowed the shuttle of hundreds of guests from the Teller House parking lot to the Cemetery. Depending on v... END_OF_DOCUMENT_TOKEN_TO_BE_REPLACED

Benefitting the county, schools, and much more By Don Ireland   This year marks the 30th anniversary of casinos opening in the former little mining towns of Black Hawk, Central City and Cripple Creek, Colorado. In those early years, smoking was allowed inside ... END_OF_DOCUMENT_TOKEN_TO_BE_REPLACED