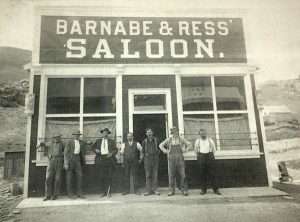 Good news! Josey and Mindy Wales are expecting a baby, their first, in August. Josey is busy getting the Gap Trading Post up and running for the summer and organizing Bluegrass Festivals. Mindy is in the process of trying to open up another portrait studio, in addition to operating Mr. Yellowbellows. By August, their schedule is about to become even busier than usual.

Who in Gilpin County has a dark tan, a broad smile, and looks totally relaxed, especially in the winter? Lorraine Crowe, that’s who. Lorraine and her son, Mike, recently returned from a two and a half week vacation in Arizona and California. The twosome visited a number of places, including Mesa, Arizona, where the Chicago Cubs are in spring training. The Cubs just happen to be Mike’s favorite team.

Did you know? Colorado’s vehicle license plates first used the adjective “Colorful” in 1950 and plates have been issued with a mountain design on the top or bottom border since 1960. The current design was introduced in 1977. Longtime Coloradans may remember the 1956 plates which had reverse letters and numerals on a solid black field. In 1957 the field was orange. In 1975 and 1976, as the state approached its 100th birthday, “Centennial” plates had red letters on a white field with a light blue mountain design along top and bottom edges. Today’s Yuppies would have loved the license plates issued in 1917. These were “simply mah-velous” with black letter and /or numerals on a field of light mauve.

Angelo DiBenedetto was seen in Denver at an art show last weekend. He seems to be having fun hobnobbing with a wide assortment of people decked out in everything from punk to JC Penny wear to diamond and furs.

The weather was beautiful last weekend. However, Monday morning everyone in Gilpin woke up to an unpleasant surprise—the spring like weather disappeared overnight and cold, snowy weather sent Gilpinites back into hiding.

It’s that time of year again when the Gilpin County Chamber of Commerce would like to recognize a person in our community who has given of themselves in an unselfish way. Who has made our community a better place to live? Who has given 100% of themselves? Who is the person you would like to nominate for the “Community Service Award for 1988”? Entry forms can be picked up at First Interstate Bank of Gilpin County in Black Hawk, One Stop Printing on Main Street in Black Hawk, the T-Shirt Corner, or the Rock and Lite Shop on Main Street in Central City. The deadline for entering nominations is April 14.

Died: Leona “Pat” Hansen, a resident of South Beaver Creek Road in Gilpin County, died March 14, 1988, at Rose Medical Center in Denver. She was 79 years old. Hansen resided with her brother, Dr. Donald A. Bennallack, on South Beaver Creek Road. She was the widow of the late Clyde W. Hansen, who preceded her in death in 1978. She was also preceded in death by her parents Ralph W. and Leona Bennallack, who were born in Central City. Hansen was a member of the Pocahontas Lodge and Eastern Star. Until her retirement three years ago, Hansen worked in Dr. Bennallack’s office for 26 years. She was a graduate of Manual High School, located in Denver. Services were held March 16 at the Crown Hill Mortuary Chapel. She was buried in Crown Hill Cemetery.

Gilpin County high School students made an excellent showing at the Speech Festival held in Breckenridge last Friday. June Bradford won 2nd place in a poetry interpretation of “Thanatopsis” by William Cullen Bryant. David Calabrese won 3rd place in original oratory. His subject was “The Communist Menace.” The trip was a hard one due to the bad weather, and the students were held up for two hours on their return trip by a huge snow drift on Loveland Pass, but all returned home safely. Mr. Dickson plans more of these meetings for next year.

Mrs. Wm. Grenfell is quite ill in Lamb Hospital in Denver.

Mrs. Inez Schmidt is spending the Easter holidays in Denver with friends.

Easter services will be held in the three churches in this city, Sunday. Services will be at 8 o’clock in the morning at the Catholic Church; and 9:30 at both the Methodist and Episcopal Churches.

Mrs. Hart, of Denver, will open a Beauty Parlor as soon as she can obtain desirable accommodations. The news will be heartily received by the ladies of the city in caring for their blonde, red, and brunette tresses.

The Ray-Ann Cafe on Clear Creek Street is now open and was doing a rushing business last Sunday.

Miss Kathryn Ecker is enjoying the week’s Easter vacation from her teaching position in Littleton.

Last Sunday guests of the William Margerums were Mr. and Mrs. Robert Lehrer and daughter Sandra.

Mr. and Mrs. Melvin Jacobs were among the delegates attending the Republican State Central Committee last Saturday at the Shirley Savoy Hotel. Others in the group were Mr. and Mrs. Mike Neal and Mrs. Betsy Smith, all of Rollinsville.

Miss Mary Lynch who has been in the Senior Citizens Home in Boulder is now in Colorado General Hospital.

The Alter and Rosary Society will have a benefit card party April 11, at the Canyon Cafe.

Deputy mineral surveyor Charles L. Harrington came over from Idaho Springs, Monday morning, to make a survey of the Quartz Hill tunnel for Mr. Frost, superintendent of the company, who are doing the work in the tunnel.

Clifford I. Parsons, accompanied by his son George, left for Denver Monday afternoon, where the young man had the delightful sensation of having his tonsils removed. Reports are that he is getting along nicely since the operation.

Mr. Harry Newmeyer was a passenger to Denver on Saturday last, on matters of business.

Roy J. Keenan, wife and children arrived from Glenrock, Wyoming, on Tuesday of last week, on a visit with his mother, Mrs. D.D. Humbly. They left Thursday morning for Deer Park, Washington.

John Rohling and wife, Ed. McCarty, wife and son, and Miss Rose Shonherr were up from Denver to attend the masquerade dance given by the Neighbors of Woodcraft on Saturday evening.

The masquerade dance given by the Neighbors of Woodcraft on Saturday evening, was a grand success in every particular. The music was above the average, and all attending enjoyed the occasion to the limit. The first prize given for the best characters went to Helen Butcher of Idaho Springs, and the second to Emma Parnell, of Central. The first prize for gentlemen was won by Charley Hawn of Idaho Springs and the second by Miss Irene Gibbons, of Black Hawk.

Sweethearts: Recipes we all like, by Nellie Maxwell: Cream two thirds of a cupful of butter with one half cupful of powdered sugar, add one teaspoonful of boiling water and one teaspoonful of vanilla to hasten the creaming. When the mixture is very light break in two eggs, one at a time, debating one minute after each addition. Now add three cupful’s of flour gradually and when the dough leaves the side of the bowl, turn it on a pastry board covered with another cupful of flour. Knead lightly, working in the flour. The dough must be smooth and not stick to the hands. Place the dough in the bowl and cover with a towel, let stand two hours. When ready to roll, roll out a small piece at a time, one quarter inch in thickness. Cut with a small cutter into any desired shape. Bake slowly. When the cakes are cold, ice them and pack away. For icing add enough hot water to sifted confectioner’s sugar to make a smooth glossy icing. Add a bit of color and spread on the cakes.

Why are they called Marines? The word “marine” is derived from the old French word, “marin,” meaning “sea soldier.” The United States Marine Corps is an independent branch of the military service, and, though under the direction of the Navy department, may be detailed by order of the President for service with the Army. The duties assigned to the Marine Corps are to garrison the Navy yards and naval stations and the defenses erected for their protection; to furnish all battleships and cruisers and the vessels, when necessary, a detachment for guard duty and also to assist in the handling of the ships’ guns. A mobile force is also always held in readiness at the Marine barracks as the first line for foreign service if the occasion may arise.

Mr. C.F. Barker was going out of business and had offered his entire stock of clocks, jewelry, etc., at auction.

The Welch singers were greeted with a crowded house at the opera house on Monday evening and their program was well rendered and greatly enjoyed.

Sunday’s snow storm was the heaviest experienced in the county for the entire winter, starting Sunday and continuing until Monday morning, leaving between two and three feet in various parts of the county. Traffic was suspended for several days until the roads were broken, since which time regular hauling from the mines has been resumed.

Mr F. B. Meckling, Of the Cyclops assay office, returned Monday from a business and pleasure visit to Denver.

Jas. Morrison and Richard Mackey drove over to Eldora on Sunday last to see how the camp was progressing.

Will Richards, of the Harley Merchandise Company, who has been laid up for a week, on account of injuries received from a fall, was at his post of duty the first of the week.

Mr. and Mrs. Harry Richards returned from Boulder County on Monday last, with the intention of packing up their household goods and making that city their future home.

War will soon be declared against Spain for blowing up the battleship Maine, in the harbor at Havana, and everything is going at top speed in Washington in getting everything in readiness for the announcement.

The Misses Kate Sutton and Askew, of Russell Gulch, returned last Friday evening from Denver, where they had spent the spring vacation, to be ready to resume their duties as teachers in the public schools in that place on Monday morning.

Manager Dickey of the Gregory Consolidated Mines Company, operating the Gregory-Bobtail property, reports the cross-cut to intersect the Bobtail vein is now 890 feet, and that he believes the New Jersey vein has been intersected. He said the showing was good and very encouraging.

A pool of local parties have taken a lease and bond on the Dike property, near Nevadaville, which is owned by James Miller of Brownesville, Pa. A new shaft house has been constructed and a plant of machinery has been installed, and after doing the necessary work in the shaft the mine is to be unwatered. The shaft is over 250 feet in depth and the lessees will decide on the future developments after the mine is drained. The property has been idle for years, and when operated in the early days, produced mill ore that returned from 11 to 14 ounces gold to the cord on the plates. All members of the pool are practical mining men, and will make the mine a paying proposition if it is possible to do so.

Word was received in Black Hawk of the death of Mrs. D.R. C. Brown, of Aspen, at Hot Springs, Arkansas, on Tuesday evening last. Deceased was better known to Black Hawk people as Kate Cowenhoven, whose parents were in business here for years before moving to Aspen. She is survived by her husband, and one son and one daughter.