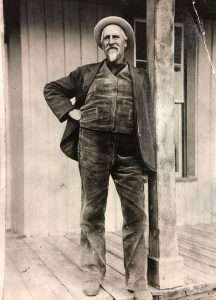 Water, water everywhere—in various containers from plastic gallon jugs to bathtubs. The water shutoff, scheduled for Monday between the hours of 9:00 a.m. and 4:30 p.m., which was to affect Eureka, Main, Spring, Roworth, and Hooper streets, sent terror to the very soul of many people. Eric Klemp, the city’s water commissioner, was as surprised as everyone else when the scheduled water shutoff was not necessary. According to Klemp, at some unknown time a water line shutoff valve was installed, therefore, the expected shutdown of water service was not needed. Many people were happy to avoid the inconvenience, but several shop and restaurant owners who lost a day of business due to the scheduled shutdown were not delighted. Work on the water line has been in progress for several weeks in order to solve a freezing line problem.

The Gilpin County RE-1 Eagles football team has a 5-3 win-loss record this year. On October 23, the Eagles again met their strongest opponent this year, Peyton, who defeated the Eagles 28-6. The Eagles also played against Peyton on September 12. Peyton’s team is unusually strong and to date holds an 8-0 win-loss record.

Flu hits Gilpin County by Jeannie Nicholson, Gilpin County Nurse. It is flu season and several cases of influenza have already been reported. Immunization against influenza is available through the county nursing service at a cost of $5.00. Flu is a viral infection of the nose, throat, bronchial tubes, and lungs, and it usually occurs from about November to April. Symptoms usually include fever, chills, cough, soreness, and aching. Although most people have very mild cases, some people become very ill and may die. Those who are most at risk include persons over 65 years of age, people of any age who have heart of lung problems, kidney disease, cancer, cystic fibrosis, diabetes, anemia, severe asthma, or immunological disorders, and children on long term treatment with aspirin. This year, the flu shot contains three strains to provide immunity against the types of flu which have been circulating in the past year and are thought to be the most likely to occur this winter in the United States. Most people have no side effects from the recent influenza vaccine. Flu shots are given by injection, usually in a muscle of the upper arm. People who should not be given flu shots include those who are allergic to eggs, those who have been paralyzed with Guillain Barre Syndrome, women who are pregnant, and those who are ill and have a fever presently. Consult your physician if you fall into any of these categories before getting a flu shot.

George (Cap) Eustice is home after spending several weeks in Rose Hospital in Denver. He says he is feeling right smart, but misses flirting with the nurses while recovering from a  heart attack. Glad you’re home and feeling better, Cap.

George T. Heuer died Sunday in Denver of heart attack. He was 58 years of age, and had been a resident of Casper, Wyoming for the past six years. He was born in Central City, and left here in 1917. Survivors include his wife; a son, Thomas, of Casper, WY; two sisters, Mrs. Marjorie Richardson, of Kansas City, MO; Mary E. Heuer, of Denver; two brothers, Sterling and Philip, also of Denver. Funeral services were held Wednesday morning in Denver, with interment in Mr. Olivet Cemetery.

Noticed Leo Ingram, of Golden, Wednesday, in town, visiting his brother, and shaking hands with many friends.

The Cornish pasty dinner given by the Altar and Rosary Society was a success. One hundred and twenty five pasties were sold.

The illness among the school children seems to have abated. Attendance is almost back to normal.

After spending the summer here and other parts of the state, Leo Cull and nephew Paul Fuchs left Tuesday for their home in St. Louis, MO.

The house of Robert Pipes on Backus Street has been newly painted a sandalwood color and adds much to the appearance of the street.

The Ed Evans received notice last Friday of the sudden death from heart attack of their son-in-law, Clarence Nobel of Farmington, New Mexico. He leaves a widow Katheryn, a son Louis, and a daughter Kay.

Norman Blake had a very painful accident recently when he twisted his knee and will have to hobble around on crutches for the next three weeks.

The Rose City Mill No. 1, located below Black Hawk, was entirely destroyed by fire on Wednesday evening about 8 o’clock, with a loss of close to $40,000, with some insurance, but the amount we are unable to state. The mill has been idle of the past six months. Wednesday evening, Mr. J.C. Kirkpatrick came over from Georgetown to take out a motor from the mill for use in Rose City Mill No. 2 at Empire, which is under his management, and with the assistance of Charles B. Klais and several others, succeeded in getting out the motor. On account of the building being cold, a fire was built in the stove in the mill, and Mr. Kirkpatrick left for Georgetown about 5 o’clock, and the workmen an hour later, leaving everything, as far as could be seen, in perfect condition. Two hours later, the building was in flames and as the water mains did not extend to within 3,000 feet of the building, nothing could be done by the fire department, and in a few hours all the buildings had been destroyed. The mill was owned by Macon & Company, of Denver, and last Spring was fully equipped with several units of selective flirtation for treatment of lead and zinc ores, which proved highly satisfactory and successful in having the values, and had there been enough of that character of ore in the county, the mill would have been in operation today. The prospects are not favorable for rebuilding the plant.

Mr. Walter Jenkins and wife motored up from Denver Sunday morning to spend the day with his parents, returning that evening accompanied by Mrs. W.O. Jenkins and Mrs. Ll. P. Davies who will visit for several days in the valley.

Mrs. James M. Seright received a telegram Tuesday morning, announcing the death of her mother on Monday evening at her home in Milton, Wisconsin.

Died: Jospeh Pascoe. Joseph Pascoe, who left Nevadaville some twelve years ago with his family to make his home in Idaho Springs, died there on Saturday, October 22nd, 1927, aged 58 years.  He was born in Cornwall, England, in 1869, and coming to America, settled in Nevadaville when he was twenty one years of age. In 1898 he was married to Miss Emma Hal, and he is survived by his widow and five children, Mrs. Pearl Shirkey, of Deer Trail, Colorado; Leroy of Glendale, California; and George Marion and Mrs. Opal Viewing of Idaho Springs, CO.

Harry J. Sears is now postmaster of Central City, the office having been turned over to him by Marcus Leahy on Monday last. He will have as his assistants Miss Mary Leahy and Flor Ashbaugh.

Mr. T. S. Schlessinger came over from Leadville, Wednesday, on a visit with friends and to look after his business and mining interests.

Miss Flossie, daughter of Mr. and Mrs. W.H. Hosen, of Lauren Street, Central City, gave a birthday party to her little friends at her home on Saturday evening last.

Jack Key and daughter have returned to Black Hawk from a trip taken to Kansas, on a visit with his parents.

A letter has been received from Chicago announcing the death there of Ben Hawks, on the 10th of October last. Mr. Hawks was interested in mining operations in the northern portion of the county, and left for Chicago over a year ago, not being able to stand the high altitude of this section.

The shipments of ore and tailings from the Black Hawk depot to the smelters in Denver for the month of September totaled 315 carloads, or close to 6,000 tons. The shipments for the same month last year was 298 carloads, a gain of 17 carloads. The heavy snow storm of last week interfered with hauling from the mine or the increase would have been much greater.

The management of the Gregory-Bobtail properties intend to install electric lights in the incline shaft down to the 900 foot level, where the pumps are stationed.

The decomposed body of a man was found in a gulch near Golden City yesterday with three bullet holes in his head. Within the last three years there have been found the bodies of five men near the same place, all shot. Who the murderers are is a mystery.

The first story of the Tyler House is all ready for the last or white coat of plaster. The remaining floors, with the exception of the bank room, are much the same as they were a month ago. It is hoped, however, that the weather will settle sufficiently in the course of thirty of sixty days, and that materials for the building lying at Golden will be brought forward with sufficient speed and regularity to admit of its being furnished and occupied some time during the present summer. Scarcity of skilled workmen seems to be one cause of the slow progress observable. To sum up all the causes which have operated adversely to the advancement of public enterprises in this county the past six months would occupy more space than we have to spare. “The best laid scheme o’ mice and men gang aft a’gley.” In this region both mice and men seem in a fair way to reach the little end of poverty horn before the next winter sets in, unless we get a season of return from our present stagnation.

Bela Buell’s Levitt Mine is yielding enormous quantities of rich ore. The vein varies in width from eight to sixteen feet, with but little barren rock between. About five cords per day are taken out, a fair proportion of which goes to the smelling furnaces, the balance to the mills, the field of gold in both cases being extraordinarily large. The gold is very fine, equal to the best Bobtail Mine ore. The lowest depth attained is 150 feet, and the level of one hundred feet at this depth carries a crevice of rich smelting ore from one to two and a half feet in width. The whole mine is in good condition, and when present arrangements are fully developed, as they will be shortly, will produce double the present quantity of ore. This mine is now by far the largest and richest of any worked in the territory.

END_OF_DOCUMENT_TOKEN_TO_BE_REPLACED

Benefitting the county, schools, and much more By Don Ireland   This year marks the 30th anniversary of casinos opening in the former little mining towns of Black Hawk, Central City and Cripple Creek, Colorado. In those early years, smoking was allowed inside ... END_OF_DOCUMENT_TOKEN_TO_BE_REPLACED