Edward Walsh, school bus driver, received a letter of commendation from Gilpin RE-1 Principal Glenn Bittner and from the local school board this week for saving a student from possible serious injury. Walsh saw a young secondary school student run up beside a departing bus on October 1 and bang on the window. A student inside the bus reached out, grabbed the girl by the arm and held on as the bus prepared to leave. Jumping from his bus, which was immediately behind the one with the student hanging on, Walsh grabbed the girl and alerted the other driver, who stopped. Bittner and the board feel that Walsh’s actions may have prevented a serious accident, possibly even a death, from occurring. A copy of the letter will be placed in his personnel file.

On Tuesday, the Gilpin County Board of Commissioners awarded the bid for installing a concrete floor and painting the exterior of the county shop on Hughesville Road. According to Leslie Williams, chairwoman of the board, the commissioners received four bids. All of the bids were from local contractors. The bids ranged from $5,350 to $7,181. The bid was awarded to Westerlage Builders, lowest bidder for the project. Bids were also submitted by B & R.W. Construction, R.F.A. Construction, and Prospector Excavating. Williams said the present silver building will be painted in a brown tone to blend in with the surrounding landscape.

After complaints about “speed bumps” on Upper Apex Road, County Commissioner Carroll Beck investigated and photographed the area. The exact location of the two mysterious dirt piles was at hhe residence of Clarence Douthett. The bumps were approximately 10 inches high and stretched across the entire length of the road, about 40 feet apart. Commissioner Leslie Williams said several attempts were made by the commissioners to contact Douthett on Monday, but without results. On Tuesday, a county road grader was dispatched to the site to level the road. The work was done at county expense and time. Douthett, when contacted, said the dirt was left over dirt from digging a drainage ditch on the left side of the road. The ditch did not allow for drainage, he said, and water was ruining the foundation of his house. Douthett continued that the dirt he left on the road could have been realigned by one of his neighbors into the mounds. Several people referred to the dirt piles as “speed bumps.” “The commissioners were quite helpful,” said Douthett. “I would have cleared them up if they would have called,” he added. Williams commented on Tuesday, “Again a different story,” A letter will be sent to Douthett on the “speed bumps.” Williams said the county road crew will reopen the ditch.

Peggy Palmer of Central City, a proud grandmother, is pleased to announce the birth of her grandson, Anthony Michael Cole. Anthony was born October 16th, 1987, in Colorado Springs. He weighed six pounds 13 ounces and was 19 and 1/2 inches. Parents are Mary and Alan Cole of Palmer Lake, Colorado. He is welcomed by an older sister, Jessica Leann, who is six years old. His maternal grandfather is Harry Palmer of Denver. Paternal grandparents are Sue and Joe Cole of Lafayette, Louisiana.

Mrs. Mae Cassidy left last week for the East on a month’s visit with relatives.

Morgan Gray returned last Thursday from a hunting trip in the Rifle area. He reported lots of bad weather, and few bucks. However, in company with Frank Daugherty, they left Tuesday morning for Gunnison in hopes of bagging a six-pointer.

Frank Potter escaped serious if not fatal injury while crossing the street at the intersection Saturday evening, when he was struck by a car coming up Lawrence Street, throwing him against the curbing and inflicting numerous scratches and bruises. The car stopped, and two men got out, helped him to his feet, and then sped rapidly away. Frank could not get the license on the car, but thinks it was from Denver.

Mrs. George Eustice is home after spending a few days at Rose Hospital in Denver. She reports that “Cap” is convalescing rapidly and expects to be home next week.

Don’t forget the Cornish Pasty dinner tomorrow evening at the Elk’s Hall, given by the ladies of the Catholic Church. You will receive a most delicious dinner, visit with friends, and help in a worthy cause for the church. Be seein’ you.

Mrs. Edna Champion was up from Denver Saturday visiting her brother Charles Thomas, who has been ill.

Little Gail Johnson underwent a tonsillectomy at Children’s Hospital last Friday, but is recovering nicely from the operation. Grandmother LaVerna Mitchell was in Denver this week to see her.

Mr. Eugene Chaney, who is employed at Fitzsimmons Hospital was in our town Saturday visiting old friends.

Mrs. Luella Fritz celebrated her birthday, October 17th, by enjoying a day in the City with her daughter Helen and family.

Mr. Brooks Fullerton motored down from Fort Collins on Thursday evening of last week on a visit with his parents, before leaving for Washington, D.C., where he goes to accept a position again in the Interior Department of the government.

Dr. E.F. Warren and wife, accompanied by Leroy J. Williams, wife and two daughters, came up from Denver on Saturday evening to spend Sunday in the mountains’ with all returning home Sunday afternoon except Mr. Williams, who remained until Tuesday morning to attend to legal matters before the county court.

George McFarlane motored up from Denver Saturday afternoon on a short visit with his father, returning home Sunday afternoon.

John. B. Doran was over from Idaho Springs Sunday morning to attend to business matters, returning on the afternoon bus. He is working in the mill at the mouth of the Argo Tunnel.

Mrs. Charles Murdock and son, of Whittier, California, a sister of Mr. C.O. Richards, arrived here on a visit on Wednesday last, remaining until Saturday. The lady was on her way home from attending the funeral of her father, Mr. Richards, at State Center, Iowa.

Died: In Denver, October 20th, 1927, Michael O’Hea, formerly of Black Hawk, aged about 78 years. Mr. O’Hea, who had spent the greater portion of his years on North Clear Creek above Black Hawk, was taken to Denver several weeks ago, suffering from the infirmities of old age, where his daughter could care for and comfort him in his declining years. He was a pioneer of Gilpin County, and owned and operated several mining properties on Clear Creek. He is survived by Mary and Michael O’Hea, of Denver, John, of Los Angeles, and   Mrs. Van Tress, of Spokane, Washington. Funeral services were held at the funeral Chapel of Horn & Son, Denver, Monday morning, interment in Mt. Olivet Cemetery.

Tuesday evening’s train from Denver did not reach Black Hawk until 10:30 o’clock Tuesday night, on account of the big snow storm.

A Chinaman named “Ham Tong,” living in a cabin in Russell Gulch, was held up and robbed on Thursday evening by two men who beat him over the head with some blunt instrument. Sheriff Nicholas was notified and made an investigation, but did not find any trace of the robbers.

Charles Unser had his left leg broken in two places and both shoulders hurt by falling rocks in the Phoenix-Burroughs Mine yesterday morning, and was attended by Dr. Bonesteel.

A big snow storm struck this section on Tuesday, blocking the roads, and making it impossible for the quartz haulers to get to the mines and mills.

A fine body of smelting ore has been opened up in the lower workings of the Gregory property, and enough ore is being hoisted daily to keep 25 stamps dropping in the Bobtail Mill. The water in this property is being handled easily, and at much less expense than formerly, the boilers now requiring four carloads of coal weekly, when heretofore ten carloads were necessary to keep the pumps going.

The Buell Mine has been closed down by the eastern syndicate which has been operating the property, and the pumps have been pulled out and it is quite likely it will be many months before the mines will be operated again. Reports are that the operators offered a reasonable price for the property, which was refused.

Sinking operations are being carried on at the Little Annie shaft in Pleasant Valley District, the present depth of the shaft being 140 feet, which will be continued until it reaches a depth of 174 feet, when levels will be extended both ways from the shaft. 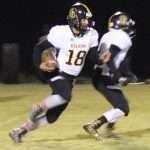 Eagles’ FB kicks off a win against Soroco
Next Article 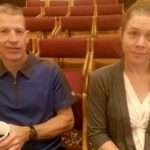