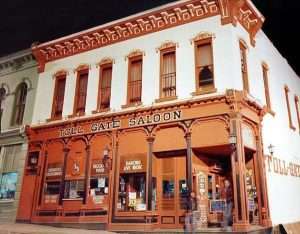 Considering shoplifting in Central City? Read this first: This is what happened on September 19, according to a police report filed by Officer Elmo Gatlin of the Central City Police Department. Joan Adams reportedly spotted a man near the cash register at Mountain Blue Gem, the Lawrence Street shop she and her husband Paul operate. Since the cash drawer was open, Joan said, and she knew it had been closed immediately before observing the man, she called Paul and told him there was a shoplifter in the store. Paul Adams accosted the suspect in the street and asked him to accompany him to the Central City Police Station, which the man reportedly agreed to do. The man apparently changed his mind, however, and fled west on Eureka Street, with Adams in pursuit, yelling “stop that shoplifter!” Another business owner, Rand Anderson, then joined the chase, and the pair caught the suspect in front of Wells Fargo Gift Shop, where they recovered a leather coat the suspect allegedly concealed in his own coat. Not one to give up easily, the suspect is then said to have once again attempted to escape, fleeing up Pine Street. By this time, 19 year old Steve Ihme had dropped his silverware and run out of Tedd’s Cafe, where he was eating when he spotted the brouhaha, and joined the pursuit. J.D. Corelli beat feet up the street, as well, and he and Ihme caught up with the fleet footed suspect at the top of the steps leading to Glory Hole garden on Main Street. Corelli shouted to the locals below to stop the fellow. Lisa Albrecht grabbed him by the shirt, as he crashed into her at the foot of the stairs. As Lisa hurled the man against the wall, he punched her in the nose, she said, but Ihme was able to grab and subdue the man. Stephen Ross Titus, 40, of Denver was charged with third degree burglary, third degree assault, and theft by Officer Gatlin.

Died: Maid Edna Williamson. Maid Edna Williamson was born in Denver, August 27th, 1890. She was the daughter of Richard and Libby Williams, pioneers of Gilpin County. Maid Edna was raised and educated in Central City. She married Glenn F. Williamson, of Denver, at her mother’s home in Central City on July 7th, 1918. Glenn Williamson was employed by the U.S. Government in the Railway Mail Service until his retirement. He preceded his wife in death. Family members were Richard Edward Harris, who was killed in a traffic accident in California in 1964, and Lois Williamson Caldwell, deceased in 1978, in California. Maid Edna is survived by her son, Dr. Hugh F. Williamson of Dolores, Colorado; seven grandchildren, and seven great-grandchildren. She made her home at the Colorado Eastern Star Home, in Denver, where she passed away September 24th, 1987. She was 97 years old. Williamson was cremated and no services were held. Her ashes were taken by Judy and Fred Humphrey to Bald Mountain Cemetery to the Williamson family plot.

A roving tourist while perambulation near the Ivanhoe Mine on the slope of Quartz Hill on Sunday, entered a small frame shack near the shaft, and discovered a bundle of new clothes which had been pushed under some timbers. He reported the find to Marshals Smith and Justice, who investigated and brought the clothing to this city. Apparently they had been stolen from a dry goods store, and consisted of a half dozen boy’s trousers, a long red ladies coat, two pairs of male corduroy pants, and several other articles. A few of the pieces were marked, “Universal Club—Lot K-7669,” while others bore the stamp, “Deer Creek Garments, No. 3846.” The ladies coat and corduroy pots were badly chewed up by rats, but the other garments were in fairly good condition. An investigation is underway by the sheriff.

Wm. Barrick, who has been in one of the hospitals for ten days, is home again, and his many friends hope his illness is but temporary.

The Gilpin County High School has purchased a 40 passenger bus for transportation of students from outlying districts. The larger enrollment this year necessitated the purchase. The bus will also be used to convey the teams to basketball games and on other trips during the year.

Mr. Don Russell underwent surgery at the Veteran’s Hospital on Saturday last, for the amputation of his right leg above the knee. Best wishes of all his friends are extended him for an early convalescence.

Congratulations to Mayor and Mrs. Frank Fleiss, who observed their Golden Wedding Anniversary last Sunday. Due to Mrs. Fleiss’ poor health, no elaborate plans were made for the day, but a number of friends called to extend good wishes.

Miss Mary Lynch left Tuesday for Boulder where she will enter the Senior Citizens Home and remain for the winter months.

Mrs. Paul Allander is in the city assisting in the care of a relative who is ill with the flu.

Two more pupils have enrolled in the local school since the Roof family returned to their Mountain House Ranch.

Angel food cake and coffee were served to a number of guests at the home of Otto O. Blake Sunday in honor of the 23rd birthday of their daughter, Mrs. Elizabeth Branecki. Many returns of the day, “Sissie.”

Mr. and Mrs. E.L. Ward entertained at their Boulder home Sunday in honor of Mr. and Mrs. George Anderle who celebrated their 28th wedding anniversary. Congratulations. Others present at the dinner were Mr. and Mrs. Gene Anderle and baby, also Joe and Shirley Anderle.

James W. Fisher, 18 years of age, of Denver, an employee of the Mountain States Telephone Company, met with a serious accident Sunday morning last, while hunting grouse in the vicinity of Twelve Mile, near Apex, which resulted in having his left arm shattered by a charge from his shotgun. He had placed his gun against a tree and the wind knocked it down, the charge in the gun exploding, and the lad received nearly the whole charge in the fleshy part of his left arm. Sheriff Oscar Williams was called and brought the injured man to Central, where he was given emergency treatment by Dr. Shultz and was taken at once to one of the hospitals in Denver. He came up from Denver Sunday morning with his brother, Earl, for a day’s sport hunting grouse, and went back that afternoon with his arm shattered and in a serious condition.

Mr. and Mrs. W.O. Jenkins left for Denver Saturday afternoon, where the head of the family will have his molars attended to by a dentist, so that he can get good service in handling his food.

Reuben McKay and wife were up from Denver on Sunday to spend the day with his father,

Oscar Williams and wife left for Denver Wednesday afternoon, the former to attend to business matters while the latter visited with friends, returning home Thursday evening.

How to Make Deviled Chicken by Nellie Maxwell: Make a sauce of salt, pepper, dry mustard, paprika and grated lemon peel with a little of the juice of the lemon, Worcestershire sauce, and a few drops of tabasco. Heat until hot, add cubes of cooked chicken and cook until well heated through. Add a tablespoonful of butter and serve.

Master Guy M. Laird, accompanied by his sister, Miss Lottie, left for Denver last Tuesday on a visit with relatives and to enjoy the many attractions of the carnival.

Mr. H.G. Shuck, wife and son, left Tuesday for the east, where Mr. Shuck will undergo an operation for a growth on his side.

Owing to the serious illness of his wife, Mrs. J.H. Nicholls, Sheriff Nicholls was obliged to take her to Denver Friday for treatment.

At the San Juan Mine, sinking the main shaft has been stopped at a depth of 900 feet, and present developments consist in extending the east level. The work is being prosecuted with day and night shifts and they are getting into new grounds with good prospects. Leasers are working in the upper levels and are taking out a good grade of ore.

The regular force of miners at work on the Topeka Mine now number forty, which includes leasers. Sinking the main shaft has been completed and with the present course of development work, this property will keep up its own record as a shipper of good grades of both mill and smelting ore.

The production of the Concrete Mine in Prosser Gulch for the month of September was in the neighborhood of 150 cords of ore, both mill and smelting ore, and both showing good grade in values. The present working force now numbers from 40 to 50 miners, which is being increased as fast as ground is opened up.

Born: In Nevadaville, October 4th, 1897, to the wife of Thomas Davey, a daughter.

The Rough and Ready baseball club played the Stars yesterday afternoon on the grounds on Bobtail Hill, a match game, the Stars having only seven players, while the Rough and Ready party had the full nine, and the Stars giving their opponents the odds of two to one. The Stars scored forty-three runs, to the Rough and Ready’s twenty six, giving the game to the latter. The prize played for was the ice cream for the seven by the nine. It is rumored that the umpire, H.C.L. Horn, starts for Georgetown this morning to avoid being persecuted by members of the Stars.

The streets of Central were thronged last evening with people from the regions round about, many of them from the caverns in the hillsides—fresh from their search for gold and silver.

We are prepared to execute all manner of plain, fancy, and ornamental letter press work at the Register job rooms. Our office is one of the most complete in the west, and the recent addition of numerous elegant new type faces and other materials enables us to do better work than at any previous time.

We came very near having a thrilling item for this morning’s issue. The excitement seemed at one time just about to culminate in a first class fight, but the timely interference of a friend of law and order brought a prompt conclusion.

No gentleman will think of going to the Teller House reception with first buying a pair of those elegant kid gloves of which Mrs. Cody has received a large stock, white and all the evening shades.