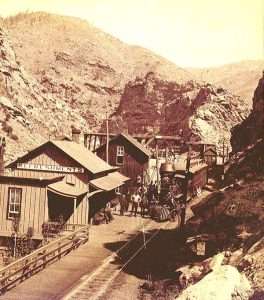 This may be the last weekend to enjoy the excellent sight of the changing aspens. This year, colors of the aspen range from brilliant yellow to a warm orange and a deep red. Throughout Colorado the spectacular sight can be seen. Gilpin County is certainly not an exception. Aspens can be viewed from the northern end of the county to the southern end. For a tranquil walk or drive, try several of the back roads, instead of Highway 119.

The Gilpin County Arts Association opened their doors recently for a social tour by fourth and fifth grade students of Gilpin County RE-1 School. The tour was arranged by Elizabeth Fonseca, the school’s art teacher. Gallery Manager Sandra Foushee was on hand to help. The students were required to apply their technical knowledge of art while on the tour. Fonseca had prepared 21 questions to be answered by each student. Following a tour of the art association, the students paid a visit to the Thomas-Billing Museum on Eureka Street.

For an entire weekend of fun, plan to attend the annual Gilpin County Turkey Hunt this weekend, September 26 and 27. It is not only an event for the participants, but two days of fun for kids and adults alike. It is sponsored by the Gilpin County Chamber of Commerce and is a mountain style party, including food and field games. Saturday will feature modern firearms competitions, beginning at 9:00 a.m. until 5:00 p.m. Black powder competitions, as well as archery and tomahawk throws, will be held Sunday, also from 9:00 a.m. until 5:00 p.m. Participants need to bring their own weapon and ammunition. Registration is $2.00 per person for each of the events. Competitions will be held for men, women, and children. A turkey will be awarded to the winner in each of the 24 categories. A grand prize will be awarded each day. The event will be held at the Weaver City Farm, nine-tenths of a mile west of Rollinsville on the Old Wagon Road, the road to Tolland and East Portal. Simply follow the “turkey signs” to the area. The location is donated by Jerry Ward of Rollinsville.

Died: Albert Truelove passed away at the age of 65, in England, on August 21. Lovers of the D’Oyly Carte Opera Company will remember Albert as the Secretary of the company, who visited Central City on several occasions and was a favorite guest of his many American friends as well as host to those same friends in ‘his’ city of London. He and all of his compatriots in the company made D’Oyly Carte a symbol of the friendship between Britons and the U.S.A. Throughout his life, Albert was a devoted admirer of the D’Oyly Opera Company. He worked his way up in the organization, acting as tour manager in his early days for the Savoy Hotel group, and later assuming administrative responsibilities for Dame Bridget D’Oyly Carte. He last served as general manager of the Savoy Theatre. He became ill before retiring, during which time he hoped to devote his time to sorting out the archives of the D’Oyly Carte Opera Company.

Central City has been unusually quiet this past week. The aspens have not donned their autumn colors, but next week thousands of visitors will be up from the valley to view the most glorious scenes of the year. Outside of a few squabbles and mediocre quarrels, of which are not apropos in mentioning, but few visitors have come to our city, and few residents have left for any vacation trips. We could mention, however, of many residents visiting Denver; or dining with friends at “The Drift,” but these are more or less unimportant. It is refreshing that no fires have occurred, and so we go our merry way, while resting from the activities of the summer. But little sickness is in evidence, people are happy and contented, and the “Golden Queen of the Rockies” is one of lassitude and quiet.

Mr. and Mrs. Alfred Gocke left Wednesday morning for their home in St. Louis, after spending ten days visiting the McCoy and Welch families. While here they visited friends made on previous visits and enjoyed the mountain trips.

Mr. Don Russell is in a Denver hospital for surgery.

Mrs. Verner Sorenson spent Monday in Loveland. On Tuesday Mr. and Mrs. Sorenson and Rocky went to Denver. Rocky is feeling fine after his recent illness.

Mr. and Mrs. Carl Skagerberg announce the engagement of their daughter, Helen Shirley, to Thomas Cryan, of New York City, formerly of Central City. A November wedding is being planned.

D.L. Russell, an old timer around Central City, and a relative of the Frances Wayne family, has returned to the scene of operation in Nevadaville, after being east for a few years and will operate the Prize Mine up the gulch. He intends to erect a mill for the recovery of gold and silver.

Mrs. Martha Kennish has gone to St. Charles, IL, where she will visit friends for several months.

Mrs. Yvonne Marshall was up from Denver recently to look after her apartment on Selak Street.

Dr. and Mrs. J.D. Nassimbene and two children spent four days last week near the Gunnison River where they were joined by friends. They caught their limit of fish, went horseback riding, and had a wonderful time.

A picnic and family gathering at the Gush Rudolph ranch Sunday included Uncle George Rudolph, who was celebrating his 86th birthday, his family from Denver and a cousin, Mrs. Augusta Moore, of Golden. Other callers were Mr. and Mrs. Carl Rydin and Miss Nellie Tamblyn of Denver.

Mr. Howard E. Fish of Bellflower, California, stopped in to see some of his old friends last Wednesday. He and his family formerly resided in Lake Gulch and he expressed a longing to return to this community.

A fist fight developed near the Phillips 66 Service Station Tuesday evening between Robert Nye and Walter Perkins over a dispute concerning some ore. Nye was taken to Black Hawk Police Court by City Marshal Mike McNulty, where he pleaded guilty to assault and battery and was fined $10.00 and costs by Judge Turner.

Sheriff Oscar Williams and Deputy Thomas Mitchell left Saturday morning for Canyon City, to deliver Mr. Ashmore to the warden of the penitentiary who has been sentenced to the “pen” for one year for non-support of his family.

Perley Cox, wife and son, motored over from Boulder Sunday on a visit with her parents, Mr. and Mrs. Walter Lampshire, returning home during the afternoon, accompanied by Mr. Lampshire, who will take in Denver before returning home on Tuesday evening.

Mr. Arnold Meyer, wife and daughter, arrived from Cumberland, Iowa, the first of last week, on a visit with her mother, Mrs. Sandell. On Friday, his father and brother and Miss Martha Meyer arrived from the same place, to enjoy a short visit in the mountains.

The first snow storm of the season made its appearance here on Saturday evening, continuing for a couple of days, and covering the mountains to a depth of a couple of inches. The weather was warm and the snow melted as soon as it struck the ground, or the fall would have been much heavier. Tuesday, the sun was shining brightly and by night all the snow had disappeared. All the flower gardens were blasted by the cold snap, and the beautiful foliage and flowers are now but a memory.

Died: A card was received at this office the first of the week from Mr. L.K. Healey, of Allentown, PA, announcing the death of his father, James. H. Healey, on September 10th, 1927, at his home in that city. Mr. Healey will be remembered as the eastern representative of the Penn-Colorado Mining Company, and has visited Gilpin County a number of times looking after the interests of the company at Apex, and in this section, and spent the greater portion of last year in this city. He had a number of friends in Gilpin County who will be surprised to hear of his death. The card sent by his son, L.K. Healey, announces that he will continue the general insurance business which his father conducted at the time of his death.

Photographer Thomas was in the vicinity of the Middle Boulder last Friday, endeavoring to get a picture of the splendid scenery in that section. A couple of bears were trying to get into the picture, and when they showed up on the mountain side, Thomas was making tracks for a new location with his camera and supplies. The next time he goes into that portion of the county he will go prepared with a Gatling gun and a pack of dogs.

William Quiller’s daughter, of Black Hawk, while playing at the school grounds Wednesday, fell and broke her collar bone.

Miss Nellie Williams, of this city, invited a few of her school friends to her home on Wednesday afternoon, to celebrate her 11th birthday.

John Thomas Quick, of Nevadaville, was injured last Friday morning while working in the Puzzle Mine on Bobtail Hill. He was engaged in filling buckets when some scantling fell from above and struck him on the back, and knocked him out. Dr. Richmond said his injuries were not serious.

The Hot Pot Mine, at the head of Virginia Canyon, owned equally by E. W. Williams and Chris Hasselbine, was sold on Tuesday last for $20,000 cash, the money being paid these parties upon signing of the deed. The purchaser was Albert Pope of the Pope Manufacturing Company of Hartford, Conn., who has been working the property under bond and lease, with J.H. LeMoune as superintendent. The property consists of 1,350 feet on the vein, is patented, and has a main shaft of 300 feet in depth, with two other shafts 125 and 100 feet deep. Some fine smelting ore has been shipped by the lessees since they have been working the property, running from 3 to 20 ounces gold to the ton, and the mill ore also carried good values.

Born: In Central City, September 29th, 1897, to the wife of Henry Richards, a daughter.

Died: Mr. C.W. Reinhart, who has been driving the hack between this city and Gilpin, met with an accident two miles this side of Perigo Monday evening, by being thrown from the driver’s seat to the ground, breaking his neck, and being badly crushed by the vehicle turning over on top of him. Mr. Farhart, for whom Reinhart was driving expressed the opinion as to the cause of the accident, that the front wheel of the hack struck a stump and the force of the shock threw Reinhart over the dashboard on his head, breaking his neck in the fall, and that in falling he retained hold of the lines, which turned the horses quickly to one side of the road, upsetting the hack. Mr. Reinhart was 26 years of age, and came over from Boulder, where he has a sister and other relatives, where the body was taken on Wednesday.

END_OF_DOCUMENT_TOKEN_TO_BE_REPLACED

Where the dead get to tell their story By Jaclyn Schrock On Saturday, August 21, the Gilpin Historical Society held their annual Cemetery Crawl. Tickets allowed the shuttle of hundreds of guests from the Teller House parking lot to the Cemetery. Depending on v... END_OF_DOCUMENT_TOKEN_TO_BE_REPLACED

Benefitting the county, schools, and much more By Don Ireland   This year marks the 30th anniversary of casinos opening in the former little mining towns of Black Hawk, Central City and Cripple Creek, Colorado. In those early years, smoking was allowed inside ... END_OF_DOCUMENT_TOKEN_TO_BE_REPLACED