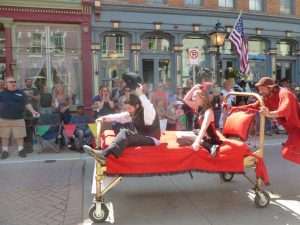 The recall petition for Black Hawk Mayor Bill Lorenz has been declared invalid. It was learned this week that the recall petition did not meet legal criteria. At the last regular council meeting on June 9, City Clerk and Treasurer Mona Dawkins presented Marko Lah’s completed recall petition for Lorenz to Jim Maloney, City Attorney. Maloney told Dawkins this week the main problem was that many of the signatures on the petition were not dated. Malone will send Dawkins a formal letter on the matter. Dawkins will be returning the petition to Lah. Marko Lah, resident and business owner in Black Hawk, announced the recall against Lorenz in May.

On Saturday, June 20, Central City will hold its 12th annual Lou Bunch Day Festival in honor of the unorthodox, colorful characters that lived and worked in the “House on Gunnels Hill” during the last century. The festival is named in honor of Louisa (Lou) Bunch, the last “madam” of Central City. She arrived in Central City in 1899 to set her “house” on the hill. The closing years of the 19th century brought many changes to Colorado. Public sentiment and the law forced Lou to close her establishment in 1916. It is rumored that she moved to Denver to help care for an ailing Mattie Silks. Lou ran an “orderly” house. The story is told of one night when a local, prominent businessman was having a “night out with the boys.” The party adjourned in the wee hours of the morning to Lou’s place. She welcomed all the merrymakers, with the exception of the businessman. He was severely admonished and turned away, when Lou said, “My house is for the needy and not the greedy.” The day’s festivities will commence with the Grand Arrival of the Visiting Madams and Sporting House Girls at 2:30 p.m. on Main Street in Central City. Shortly thereafter, at 3:00 p.m., the original Bed Races will begin on Main Street.

Toes were set a tapping at the first Central City Bluegrass Concert Series this month. The series will continue this summer with performances on July 4 and August 1 at the Clark Gym in Central City. The show begins at 1:00 p.m. and ends at 6:00 p.m. each day. The event began through the efforts of Jose Wales, himself a musician, who operates the Gap Trading Post. Wales feels confident that once people are aware of the concert series, the future will be secure. Each series includes three bluegrass groups and a dance group. Tickets for the show can be purchased in advance for $6.00 at Mr. Yellowbellows in Central City, Crook’s Palace, or the Gilpin Hotel in Black Hawk, the Diggins Restaurant on Highway 119, or the Gap Trading Post in mid-county on Highway 119. Tickets may be purchased the day of the show for $8.00 each.

The Thomas-Billing’s Museum will remain open in Central City. A ruling on the matter was handed down in Gilpin unto District Court on June 12 by Judge Ronald J. Hardesty. He ruled in favor of the numerous defendants, primarily Mike and Darlene Leslie, owners of the museum. The Leslie’s opened the museum on May 30 after receiving a special use permit from the Central City Council. The museum, a commercial enterprise, is located in a residential area of Central City on Eureka Street. William C. Russell Jr. and Betty Mahaffey, both of Central City, plaintiffs in the case, filed a lawsuit to prevent the house from being operated as a museum. They both testified that the museum would decrease their property values, create excess noise and traffic, and cause their properties to be littered with trash. The defendants’ lawyers disagreed with the plaintiffs. Since the business has opened, there have not been any problems with trash, litter, or excessive noise. The only exception was an incident cited by Mahaffey of a backhoe working on the parking lot across the street at 7:00 a.m. in the morning. Russell owns the property east of the Thomas-Billing’s Museum. Mahaffey owns the property east of Russell’s. The primary purpose of the hearing was to seek a ruling for a temporary restraining order, preliminary injunction and permanent injunction from permitting the operation of the museum. It was denied by Judge Hardesty. The lawsuit was a “verified complaint” made by the plaintiffs. It was against the City of Central, the Central City Council, the Central City Planning Commission, and the Leslies.

Four young men from Denver, who attempted to tear Central City apart last week, appeared before Police Magistrate Lee Little, on Monday, paid their fines amounting to over $300, before humbly admitting their guilt to the charges of destroying the Glory Hole Tavern, resisting arrest, and disturbance, and it appears most definitely that hoodlums coming to this city can accept and expect drastic penalties.

A suggestion has been made that Central City residents leave their porch lights in illumination this coming Saturday evening. It will put gems of beauty in the skies above, and let visiting folks know that they are most welcome, and that we are not asleep.

George Jones, of Sacramento, California, was here for several days on a visit with his brother, and to view scenes of earlier days in the city where he was born.

Mr. and Mrs. F. Miller, with niece Eva Sleep, who was born here and attended the public and high school, of South Gate, California, were here one day last week viewing scenes of early days. She was quite surprised to find such a difference in the appearance of the city as when she was a resident.

Died: Mrs. Henry P. Lowe died in the Christian Science House in Denver last Saturday, where she has been for the past ten days. She was about 85 years of age. She has been a resident of Central City for the past fifty years, coming here with her husband, the late Henry P. Lowe shortly after the turn of the century, when he operated the Frontina Mining Group and the Topeka Mine, and later the Caribou Mine, in Caribou. No funeral notice was placed in the metropolitan papers, as it was her wish that no mention of her death be made. Her body was cremated, but we have been unable to learn where the ashes were deposited. Several cousins, living in Peoria, Illinois, survive her.

Tom Collins and son Jimmie were among those attending the championship fight at Denver Colosseum last Wednesday evening.

Mr. and Mrs. James Chase of Golden recently returned from Mayo’s Clinic, where Mrs. Chase had a medical checkup.

Mrs. Jennie Zancanella is in Denver visiting relatives and friends.

Mrs. George Leyden and friends were over from Rollinsville Tuesday, shopping at the local hardware store.

Miss Carol Kent is up from Denver for a two-week vacation with her grandmother, Mrs. Luella Fritz.

In a ten-inning game of baseball, played last Sunday afternoon at the ball park at Idaho Springs, between the team of that place and the Black Hawk team, the former was victorious by the score of 3 to 2. It was a close and interesting game, with but few errors on either side, but these few errors were costly for Black Hawk. Johnson, of Golden pitched for Black Hawk, and Calvin for Idaho Springs.

Last week while we were getting the papers ready to mail, a deer walked into the office and sniffed at the news, turning up its nose at the gasoline cans and walked away. We learned that it was one that Marion Thompson found in the hills last summer, a fawn deserted, and cared for it in pity. But state laws, so we are told, forbid keeping deer in captivity, even as pets. So this one must be turned out. It has not learned to fear anything, so some dog will probably soon kill it.

How to Make Cream of Potato Soup by Nellie Maxwell: Adding an onion and a few celery tops to the potatoes while cooking will give a better flavor than to have them added to the milk. Peel six potatoes and cook with a small onion and a few celery leaves in salted water. When the potatoes are soft, put them through a sieve or ricer. Melt two tablespoonful’s of butter, add two of flour and cook until well blended; add a half cupful of the potato water and the potato; when boiling hot add a pint of top milk, or thin cream will make a richer soup. Cook in a double boiler for half an hour. Add a tablespoonful of butter bit by bit and serve at once.

From the Idaho Springs Gazette: Died: Mrs. Ralph Chase. Death beckoned on Monday and removed from earthly sphere a real pioneer of Colorado in person of Mrs. Ralph Chase, wife of one of the oldest mining men in point of service in the Clear Creek and Gilpin Districts. The death of this most estimable and lovable woman occurred at the family home in Denver, following a brief illness. Mrs. Chase was reared in Central City and was a member of the Decker family, one of the oldest in Gilpin County. It was in Central City that she was united in marriage to Mr. Chase, an assayer and chemist associated with the Chamberlain Dillingham Ore Purchasing Company for the last 33 years. Following services of 23 years in Central City, Mr. Chase was transferred to Idaho Springs, where he has since been connected with the Chamberlain sampler. While Mrs. Chase never lived in this city, the family home having been made in Denver, she was well known to many of our residents by reason of her occasional visits here. Deceased is survived by her husband, three sons, and a married daughter.

Died: At St. Luke’s Hospital, June 26th, 1927, Charles Seyler, aged 64 years. Seyler came to Gilpin County from Leadville several months ago, and worked with Claude McKay on the Aetna Mine in Chase Gulch, and in other mines in the county. He was suffering from ulcers of the intestines and was taken to the hospital two weeks ago, where he died Sunday evening. He is survived by three sisters living in Brooklyn and New York.

Between thirty and forty couples from Golden and this portion of Gilpin County, accepted George Hutchinson’s invitation to attend the mid-summer dance at his ranch on Smith Hill on Thursday evening of last week, and they had an excellent time. Lintz’s Orchestra, of this city, furnished the music and the spread was given by Mrs. Hutchinson at the midnight hour, was one of the finest ever set down in the mountains.

Mrs. Mary Dunstone, of Denver, is visiting with her son Thomas in Black Hawk.

A pool of Black Hawk and Central City miners are operating the East Notary properties in Lake District, and a recent shipment of mill ore returned 4 ounces gold to the cord, and 11 ounces gold to the ton for the smelting ore. The ore came from the bottom of an 80 foot shaft while cleaning out the same, and it is the intention of the operators to commence sinking this shaft in the immediate future.

The new shaft house on the Clifton Bell Mine, on Pewable Mountain, is about completed and the new plant of machinery is now being installed, and it is expected that in another week, everything will be in tip top condition to commence operations in the mine. The present depth of the shaft is 180 feet and sinking will be commenced next week. This property is to be operated by the King Bee Mining Company, and a large building is being erected for the convenience of the workmen.