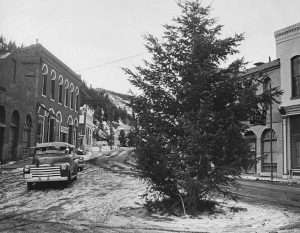 Work at the Gregory Incline and Tailings site in Black Hawk was completed this week. According to a Kemp-Hoffman employee, the job was finished Tuesday except for some grading. The Environmental Protection Agency was scheduled to do a walk-through of the site on Wednesday. The EPA has not confirmed the cost of the project. It continues to be unknown who will be held responsible for the costs, either the property owner Norman Blake, or if funding will be provided through the EPA Superfund. The project developed into a controversial issue due to the manner in which the project was handled, the work that was done, and the cost of the project. The gabion baskets that can be seen along North Clear Creek are expected to last two years, the EPA estimates.

Deputy Sheriff Joe Meeds of the Gilpin County Sheriff’s Department apprehended Francis F. Nelson, 31, of Denver, following an alleged burglary on April 23. Meeds reported that Nelson’s car was parked in the vicinity of the crime on County Road 1, in the Bald Mountain area. Nelson matched the description of a burglary suspect reported to the sheriff’s department earlier by the property owner, Donald A. Bird. Bird arrived at his residence as Nelson was leaving. Nelson was allegedly carrying a blue bathrobe and hunting knife that belonged to Bird. According to Bird, the suspect dropped the robe and Bird took the knife away from him. Bird reportedly detained the burglary suspect for a period of time. He found his .22 caliber pistol in the suspect’s back pocket before the man left the area.

The Gap Trading Post will open today off of Highway 119 and County Road 2, where the Gilpin County Library was formerly located. The new owners, Jose Wales and Jim Ericsson, are enthusiastic about their venture. The Gap Trading Post will offer a variety of services to tourists, local residents, and business owners. It will specialize in information as a free tourist service for people on vacation. The main emphasis will be to provide information on the surrounding areas of Estes Park, Nederland, Central City, Black Hawk, and Idaho Springs, including the State of Colorado. Among the free services, the Gap Trading Post will give out state park and highway maps. All community event calendars will be posted at the site free of charge. The Colorado Historical Society is placing brochures at the trading post. Local artists are invited to place their work at the trading post on a consignment basis. Private business owners may place their printed advertisements in the store for $30 per season. The trading post will be open from May 1 through September 30. A number of books on Colorado and Gilpin County will be for sale. Wales, a musician, has also scheduled a Blue Grass Festival at the Gilpin County Recreation Center in Central City. It will take place the first Saturday of each month starting in June and including July and August. Three Blue Grass groups will perform at each event from 1:00 p.m. to 6:00 p.m. Tickets will be $8 at the door, $6 for tickets purchased in advance, and children will be half price. Local ticket outlets have not been determined. Wales and Ericsson are busy recreating the historic log cabin that was formerly the county library, to resemble a 1800s trading post. The community is invited to stop and take advantage of what is offered at the Gap Trading Post.

Mr. and Mrs. Wm. McDowell have taken positions at the Air Force Center in Denver, and will commute daily.

Mrs. Mabel Hunt is still on the sick list in St. Luke’s Hospital. Her many friends wish her a speedy recovery.

The Junior-Senior class play “Stranger in the Night” was given Thursday evening in the Clark Auditorium. It was well presented and much credit is due Mrs. Maxine Gray, the director.

Mrs. Barney Olsen who spent the winter in Kansas City, has returned to her home at Heidi Chalet. Her brother, Richard Kauffman with his wife and four year old son are staying with Mrs. Olsen for the present.

The Firemen’s Dance held Saturday night at Jennie’s Hall was well attended and enjoyed by all.

At the School Election last Monday, fifteen voters turned out to re-elect Mrs. Helen Mueller as Treasurer. Other members of the board are Mildred Blake, President, and Ruth Blake, Secretary.

Mrs. Perl Neff was in Denver last week to see her granddaughter Miss Pearl Louise Neff, graduate from a Stewardess School. She will be with United Air Lines based in Washington, D.C.

Sergeant and Mrs. Witte with their five children have been visiting her parents, Mr. and Mrs. Orlando Allison, before the Sergeant goes to France for Army duty. Two of the Witte children are attending the Black Hawk School.

Among those boys in Service, we hear that Jerry Addyman is on his way to Germany; Joe Underlay of the Navy is in Japan; and Martin Baker in Korea, has been teaching English to a group of Koreans.

Mr. and Mrs. M.K. Peterson of Smith Hill celebrated their 22nd Wedding Anniversary on Sunday, May 5th, having their son Gene and family as guests.

The bay horse owned by Oscar Williams, named “Jug,” met his death by falling over an embankment back of James Witkinson’s residence on Casey Avenue, on Wednesday last.

Oscar Williams took the Board of County Commissioners to Rollinsville Wednesday morning, to meet with the State Highway Commissioners, who came up from Denver to inspect the new bridge being built by the Stroehle Machinery & Supply Company.

Mrs. Minnie McCoy, daughter and Mrs. Frank Pool returned Sunday afternoon to Denver after a short visit here. They were accompanied by Mrs. R.L. Laird, who will spend several weeks in the Queen city.

Died: John M. Graves: John McClelland Graves died Monday forenoon at his home in North Golden following an illness of several months with Bright’s disease. Mr. Graves was born November 26th, 1863, in Bone County, Iowa. He first came to Colorado in 1896, locating at Central City. He came to Golden about twenty years ago and this has been his home ever since except a few years spent in Madrid, Iowa. He took active part in all local affairs and was an honorary member of the Golden Fire Department. Mr. Graves is survived by his wife, and two sons, Roswell and Merle, all of Golden, and two sisters in Iowa.

George Fritz and wife, accompanied by Mrs. D.W. Taylor, of Fort Russell, Wyoming, came up on Saturday by auto, on a visit with old friends.

John Stroehle left for Rollinsville, Wednesday morning, to meet members of the State Highway Commission, who came up to inspect the new steel bridge, built by him, which has been completed.

George Fredrickson and wife arrived up from Denver Friday evening, on a visit with her parents, Mr. and Mrs. Julius Nordlien.

Mrs. Frank Maughan and son came up from Golden Monday evening, the former to attend the special session of the Order of Eastern Star in Central that evening. While here they were the guests of Mr. and Mrs. Otto Ruttkamp.

Among the registered guests at the Teller House during the week, were visitors from Milan, Italy, and Paris, France.

Mr. John Hooper received word last Saturday of the safe arrival of Mrs. Hooper and child on the other side of the Atlantic Ocean.

Mr. and Mrs. W.W. Botanko returned on Monday evening from Boulder, where the young couple spent their honeymoon. Tuesday evening, they were serenaded by the Gold Coins Band who were in turn entertained by the young folks.

The officials of the insane asylum at Pueblo, considering the improvement in the condition of Henry Bolsinger, as permanent, he was granted a leave of absence, and came home on Wednesday, being met at the depot by his bother Fred, and is now visiting his family in Nevadaville.

The total shipments of mineral from the Black Hawk station to the smelters for the month of April, were 298 carloads, or 4,758 tons, which was an increase of 86 carloads over the shipments for the same month of last year.

During the past month, the Saratoga Mine, in Russell Gulch, shipped 100 tons of overage grade smelting ore to the Denver smelters, and about nine carloads of concentrating ore to the Rocky Mountain concentrator. Forty men are working on the property, which is looking better than ever in the drifts and stopes, as development work is opening up ore bodies. A cross cut is being driven north from the bottom of the cage shaft to cut the ore body opened in the winze below the 600 foot level. After connections are made the shipments will be greatly increased.

Some 50 men are working in the properties of the Gregory Consolidated Mines Company, putting in new boilers, air compressors, and other machinery, as well as re timbering the Gregory Incline and drifts and the Bobtail No. 5 shaft, which has reached a depth of over 500 feet.

Married: In Denver, May 5th, 1897, at the residence of the bridegroom’s parents, Mr. Clifford H. Gilbert and Miss Myrtle K. Graham, both of Pine Creek, Colorado.

H.P. Campbell, a young man, recently of Davenport, Iowa, was seriously wounded yesterday afternoon while out with a party of young companions shooting at a mark on the hillside near the magazine of the Hazard Powder Company. The pistol used was a small-sized Remington, which arm, as is well known, is hinged near the cylinder. Campbell having pulled the hammer, and finding that the cartridge failed to explode, pulled the slide which held the barrel in place, dropped it, and was taking the cylinder from its spindle, when the cartridge exploded, the ball entering the abdomen a little to the right of the umbilicus, taking a downward course, and lodging in the cavity of the abdomen. The young man was brought to town, and Dr. McMurtrie called to attend him. Drs. Davis and Reid were also present. After making as thorough examination as could be made, without probing the abdomen, it was decided that the wound, though dangerous, was not necessarily mortal. We shall have further intelligence from the case today and will report it in our next issue.

END_OF_DOCUMENT_TOKEN_TO_BE_REPLACED

Benefitting the county, schools, and much more By Don Ireland   This year marks the 30th anniversary of casinos opening in the former little mining towns of Black Hawk, Central City and Cripple Creek, Colorado. In those early years, smoking was allowed inside ... END_OF_DOCUMENT_TOKEN_TO_BE_REPLACED