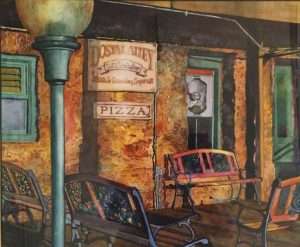 Gilpin County School District’s Employee Spotlight person of the month is Lucy Crawley, school secretary. According to the committee of people that decide on the employee of the month, “Lucy has been with the school district seven years. Lucy knows her stuff! She can answer almost any question. The office is always a busy hubbub of business and school children and Lucy is a positive energy force to meet the needs as they pour through the door. Lucy has a dry and quick sense of humor. She is very dedicated and hardworking. She is a parent, wife, and a grandma. Congratulations, Lucy, we are glad we have you in our school and community.” Lucy is the employee of the month for February.

Jonlee Anderle, Christine Crawley, and Gilpin RE-1 Band Director Lon Huckaby attended the Top of the Nations Honor Band clinic at Adams State College in Alamosa, February 19, 20, and 21. Approximately 150 students from over 50 schools around the state also attended. The guest conductor was Larry Curtis, director of music at California State College in Long Beach. Jim and Lucy Crawley and Joe and Ruth Ann Anderle attended the concert given by the honor band on Saturday afternoon in Plachy Hall. Students are chosen for Top of the Nation Honor Band based on outstanding achievement. Christine Crawley was a recipient of the John Phillip Sousa music award. Jonlee Anderle was chosen as Outstanding Musician by the Colorado Band Masters Association. They have both been veterans of the Union Pacific League Honor Band for three or more years.

Born: Blair and Pamela Wacha of Gilpin County are proud to announce the birth of their daughter. Morgan Michelle was born February 17, 1987 in Lutheran Hospital at 3:29 p.m. She weighed six pounds 14.5 ounces and was 20.5 inches in length. Morgan is lucky to have Shawn, her older brother, who is delighted and rapidly spoiling his new baby sister. Maternal grandparents are Larry Smith of Gilpin County and Mary Smith of Wheatridge. Paternal grandparents are Raymond and Charlene Wacha of Thornton. Maternal great-grandparents are Leo and Albertine Paquette of Connecticut. Her paternal great-grandparents are Peter and Mildred Wacha of South Dakota and Charles and Anna Drews of Minnesota.

Died: Mary Plank. Mary Plank passed away February 22, 1987 in Arvada at the age of 91 years. She was born February 8, 1896 and previously resided in Gilpin County. Her husband George; two sons, Henry and Louis; and her daughter, Edna Fisher preceded her in death. Her son Fred of Arvada survives her as well as seven grandchildren, 15 great-grandchildren, and four great-great-grandchildren. The Plank families were longtime residents of Black Hawk. Mass of the Christian Burial was from the Archdiocese of Denver Mortuary yesterday, with interment at Mount Olivet.

Mrs. Helen Neno returned this week from Kansas City, where she was called by the serious illness of her sister, Mrs. Alice Burns, who died shortly after her arrival. Mrs. Burns was born in Chase Gulch and spent her early girlhood here, and spent several weeks here with her sister last summer. We extend our sympathies to Mrs. Neno.

Ray Colburn and wife returned the latter part of last week from a motor trip through Arizona, California, and Old Mexico. He recounts many interesting details in relation to the visit in the land of noonday siestas and manana. Ray reports a most interesting a pleasant trip, but is glad to be back here in Central City.

Mrs. Robert Ellis and two children are spending several days here with her parents, Mr. and Mrs. Joe Menegatti, while Mr. Ellis is recovering from surgery in St. Luke’s Hospital in Denver. After his convalescence they expect to move to St. Louis to make their home.

Mr. and Mrs. Frank Daugherty, who have been in Walden, Colorado for the past several weeks, returned home the first of the week. They left again Wednesday for Gunnison to spend a few days.

Mrs. Alice McKenzie and Mrs. Donna Blake returned home Sunday after spending two weeks at the George Snyder home near Ft. Collins. They stayed with the Snyder children while the parents were on a business trip to Arizona.

Tom Collins celebrated his birthday last Wednesday with a delicious dinner at the home of his mother, Mrs. Daisy Collins in Denver.

Miss Evelyn Blake, who has been a visiting nurse in Denver since her graduation, has moved to Las Vegas, Nevada, to live with her father Edward Blake, and will continue her nursing career.

George Nelson had the misfortune to break his hip when he fell on the icy sidewalk in front of his home in Longmont on Saturday. His brother Martin and sister Alice McKenzie visited him in the hospital Sunday.

Mr. and Mrs. Wm. Leck, who bought the Burkee home in Dory Gulch, are doing considerable work on the place. Mr. Leck works in Denver.

Born: Mr. and Mrs. Joe Matson are the proud parents of a baby boy born Saturday, who has been named Randy Lee.

Smoking rooms for the ladies – these are the latest innovations on the Union Pacific trains. Neat little private compartments, where the girls may steal away for a puff, have been installed on trains between Denver and Chicago. The men objected to having a group of females evade the privacy of the smoking room, according to officials, and many complaints were received, so the Railroad came to the rescue of the woman folk and fixed up a smoking compartment of their own. Now the girls don’t have to wait a while for a smoke. They ride and smoke and they’re satisfied.

Heavy falls of snow, followed by snow slides in different portions of the state occurred during the past couple of weeks, and considerable damage resulted, but fortunately no loss of lives. Gilpin County is most fortunate in escaping both such calamities, and has been enjoying mild weather for this time of the year and the prospects of an early spring.

The masquerade dance given on Saturday evening by the Neighbors of Woodcraft, was one of the great successes of the season. A large road was present, and with good music furnished by the Harmony Girls, of Denver, everyone enjoyed themselves until an early hour Sunday morning. The first prize given for the best costume went to Miss Julian Stapleton, representing a “fisherman,” and Miss Irene Gibbons, as “his” better half. The second prize went to Verne Randolph, of Denver, who represented a Spanish Cavalier, and the third prize went to Emma Parteli, of Central, as a popcorn girl.

Died: Word was received here on Wednesday of the death of Mrs. Max Hinkle, of Oak Creek, Colorado, in the Presbyterian Hospital, Denver, that morning, as the result of an operation. The family resided in this city when Mr. Hinkle was connected with the Lowell & Clark Hardware store, later moving to Oak Creek. Deceased was a member of Neighbors of Woodcraft Lodge of this city, and has many dear friends and neighbors here and throughout the county, who will be surprised to read of her death.

In the case of Minnie William vs. The Sleepy Hollow Mining Company, in which she sues the company for $5,000 for the loss of her husband, who was drowned by the breaking in of the water from the Fisk Mine, which was tried before the district court in this city during the week, the jury, on Friday, brought in a verdict in her favor, and assessing the damages at $3,000.

Denver parties who purchased the vacant lot on Main Street, next to the market of Joseph Dennis and Company, have given a contract for the erection of a two story brick building with basement, which will be used for hotel purposes.

The little daughter of Mr. and Mrs. Walter Scott, of Black Hawk, has been quite ill for several weeks.

While section hand Charles Carlson was cleaning out snow at a culvert below the Black Hawk depot on Thursday morning, a freight train was backed down the track and ran over Carlson’s left arm and shoulder, necessitating amputation of the arm. Dr. Bonesteel and Dr. Allison performed the operation, after which he was taken to St. Luke’s hospital, Denver.

Denver parties have taken a lease and bond on the Morning Red claim in Lake Gulch, and are engaged in sinking the main shaft a lift of 100 feet, the present depth of the shaft being 50 feet. Good assays have been obtained from ore taken out and several shipments have already been made of smelting material to the sampling works. A new shaft house and plant of machinery is soon to be added for future developments.

Born: In Central City, March 2nd, 1897, to the wife of George Oldweiller, a daughter.

Tom Scott is said to have relinquished the Union Pacific Road willingly, not reluctantly, because he found it impracticable as a winter line. The losses on the winter operation of the road more than swallow up the profits of the summer traffic. Should other routes now contemplated appear more available after further examination, the question which is of importance to the people of Colorado is, “How will such conclusion affect the proposed roads of Colorado?” It was understood last fall that Mr. Sickles claimed the design of extending the Colorado Central Road through to Utah, by a route somewhat similar to that proposed by the Denver, Georgetown & Utah Company. This scheme looked still further, to the probably future extension to the Pacific coast. The object of constructing such a road was twofold, not the least important being to secure a rival line to the Central Pacific. It is understood now that the strong support of the Pennsylvania Central Road has been withdrawn from the U.P. that the Central Pacific has acquired a heavy influence in its management, and that Vanderbilt, not Scott, is its controlling spirit. This change of management cannot alter the conditions that before existed in regard to the utility and expediency of a road to the mountains; but it may make a change in the appropriate control of such mountain road. While the U.P. and C.P. roads were antagonistic, the former had an interest in securing a more southern line to the Pacific; but with the permanent practical consolidation of those roads which seems not improbable, the desire for a southern route naturally ends. The inducements therefore to build from that line to the heart of Colorado, are confined to the business which such a branch would draw over their line between Colorado and the east. This business, for some road, is already large and increasing. Were there a through line from the heart of this mining region to Julesburg, it would be a feeder of no mean importance to the U.P., and at the same time it would be of almost incalculable importance to us. This is the picture that was dimly shadowed forth to us two years ago, and flashed out in full colors last summer, promising us genuine rival lines from the base of the mountains.

END_OF_DOCUMENT_TOKEN_TO_BE_REPLACED

Where the dead get to tell their story By Jaclyn Schrock On Saturday, August 21, the Gilpin Historical Society held their annual Cemetery Crawl. Tickets allowed the shuttle of hundreds of guests from the Teller House parking lot to the Cemetery. Depending on v... END_OF_DOCUMENT_TOKEN_TO_BE_REPLACED