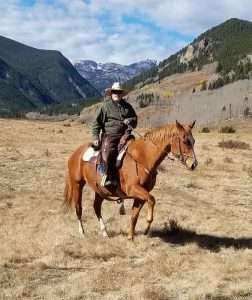 At approximately 11:00 a.m. on February 5, a frantic call was received at the Weekly Register-Call regarding bodies littering Main Street in Central City. The caller would not divulge his name. The report was unbelievable – there were unidentified snow bodies aligning the sidewalks. The employees at the Register-Call were unable to confirm the cause of the demise due to Thursday being press day. An autopsy was postponed because of the sunshine. At present, the case is still under investigation. It has been reported by an anonymous person that a man with a shovel was seen in the vicinity. He has not been located.

A gathering in memory of Joe Wheeler will be held in the Little Kingdom Room at the Teller House in Central City, Sunday, February 22, at 3:00 p.m. David and Irene Abosch of Central City, who are musicians with the Denver Symphony, will play a duet. Those people who plan to attend are encouraged to bring a candle to the gathering. Memorial contributions for Joe Wheeler may be made to the Gilpin County Arts Association.

Died: Amalia Maeder Ball: Molly Ball – Sunshine after rain on columbines in the quakies. Born in Iowa in 1886. Educated in Colorado Public Schools and the University of Colorado, Amalia “Molly” Maeder taught languages in Denver and Trinidad, Colorado, until she married Max W. Ball during the First World War. She co-founded Colorado Fur Farms Inc., in 1925. Gilpinites will remember the Lump Gulch Fox Farm and they know the Snowline Ball residence on the Tregay Homestead, just west of Gilpin Town. Widowed in 1954, in Washington, D.C., Molly moved to Snowline and Sunny Acres Villa in Denver in 1969. She took charge of the Sunny Acres rose garden and she entertained many friends at Snowline and Sunny Acres. Late in 1986, the year of her 100th birthday, the ravages of osteoporosis had taken too great a toll on her strength and agility. She died Saturday, February 7, 1987, attended by daughter Jean Katherine Ball Kosloff; son Douglas Schelling, and other near family members. Chaplain Kenneth Webb will commence a Molly Ball memorial service at 10:00 a.m., Saturday, February 14, at Sunny Acres Villa, Northglenn, Colorado.

Died: Wayne Richard Haugen of Gilpin County, February 5, 1987. He was 28 years old. Haugen was born November 1, 1958. A private memorial service was held February 7 at Woods Mortuary in Golden. He is survived by his father, Wallace Haugen of Gilpin County; his mother, Donna Pierce of the Denver area, and several other relatives.

Across the Crossroads by A.F. Mayham: According to the weatherman, the forest preserve, water board, and general opinion, the snowfall this year on the watershed has exceeded any such similar occurrence for a number of years, and that should make it binding and furnish a lot of H2o for auto radiators. When we had horses for hire we didn’t have water shortages; the old nags’ radiators stayed watered for some time and didn’t blow off going uphill and he never had a vapor lock. A fetlock was peculiarly horsey and the auto adopted in its place the nearest thing to it – the vapor lock. Anyway, horse or auto, the water supply promises to be ample if the snow thaws; if it doesn’t we will have a winterlock.

Mrs. Betsy Amy Smith, our correspondent at Rollinsville, telephoned me Sunday evening, stating that a young man had met his death while attempting to scale a steep cliff a short distance from Rollinsville. He had plunged off a cliff some 80 feet to jagged rocks below, incurring a crushed skull, broken neck, and internal injuries, and was found dead when his companions found him. Coroner Charles Robins, of Black Hawk, was called, and the body was taken to Tomford’s Mortuary, in Idaho Springs, and later to Denver. The unfortunate young man, Paul A. Murphy, of Lakewood, with four companions, attempted to climb a precipitous wall of rock, about one half mile below Rollinsville, lost his footing and plunged to his death. He was 21 years of age and was a student at Colorado University.

Editor: A new Wilton Velvet carpet was laid down last week by Marvin’s Carpet House, of Denver, replacing the old carpet installed in 1892 in the Masonic Temple, just one floor above my Sanctus Santorum. It is particularly helpful for the candidate who used to shy away from the butting of a goat, and other stuff like that there, and also, from the sound of the high heels emanating throughout my printer’s domain by devotees of the arts, belief as and tenets of the Star of the East. It has glorified the lodge room, the most beautiful in America, and with the paintings on the walls, emblematical of each degree, gives to every Mason as though an endeavor that time will never efface.

Mrs. Edith Carter, Co. Sup’t of Schools returned the first of the week from Denver, where she had been confined to St. Luke’s Hospital for several days. After spending a few days with relatives while convalescing, she is now back home and looking quite pert.

Mrs. Gladys Erickson was a visitor to Denver last Saturday. She visited with friends, and purchased a thousand valentines for as many friends.

Valentine’s Day, February 14, has a special meaning for Mr. and Mrs. Jim Robins, who were married on that day forty years ago. Congratulations.

We are glad to hear that Mr. and Mrs. Roy Steers are slowly improving from their recent illnesses. Some of their sons drive up from the valley every few days to visit them and carry in water since the water lines to the house are frozen.

Mr. and Mrs. Fred Mitchell had their little daughter, Gail Jonson, with them last week.

Funeral services were held Wednesday at the Black Hawk Church for William Mason, who died last Friday at the Davis Nursing Home, at the age of 87. Interment was in Dory Hill Cemetery. Mr. Mason was born in Omaha, Nebraska, and came to Black Hawk about 1934. In his younger days, he followed the various construction jobs and was in Panama when the Canal was being built. At one time he was a charter member of the Elks Lodge in Butte, Montana. He leaves no survivors.

People who live in glass houses should dress in the cellar.

Considerable nervousness is being manifested these days by the discovery of a number of animal tracks in the snow on Spring Street. The timid and nervous ones claim the tracks to be those of a mountain lion, while others take them to be the tracks of a bear. However, as no one has seen this animal, speculation is not confined to any particular animal, and it may be a lion, a bear, or even a rhinoceros, and as far as we are personally concerned, the tracks will ever remain a mystery if it is up to us to find the owner of said tracks.

American men are slender because for generations they have been taking their liquor standing up, comments a German movie actor. And it might be added, they carry it lying down, especially the prohibition variety.

How to Make Minute Soup by Nellie Maxwell: Take one cupful of bread crumbs, one tablespoonful of butter, one onion grated, salt, pepper, and a little poultry dressing, one and one half cupful’s of rich cream and three cupful’s of boiling water. Simmer one minute, serve with crackers.

Died: Morgan McCann from DeBeque, Colorado on February 10. The coroner from Grand Junction was summoned here Thursday to investigate the death of Morgan McCann, 40 year old civil engineer who was found dead in his home here on Wednesday. Indications were that McCann died from natural causes, although he had apparently been in good health when last seen alive. Going to McCann’s home on a matter of business, a local resident failed to secure any response to his rapping on the door. Entering the unlocked door, he found McCann dead. He had practiced his profession as a civil engineer in various parts of the state, having been employed in this vicinity in preparing lands for patent and surveying oil shale land. He was unmarried.

Died: Mrs. Elizabeth Stangler: The many friends of Mrs. Elizabeth Strangler were shocked to learn that she had passed away at the family home in Virginia Canyon, although she had been in poor health for some years, Thursday morning, February 10th. Mrs. Stangler was born in Bavaria, in 1863, but came to this country when quite young, and became a resident of this district for over forty years, where she was well and favorably known. Mr. and Mrs. Stangler were married in Central City in 1888, to which union there were born eight children, seven of whom survive: Mrs. Peter Lentz; Mrs. Faulhaber; Mrs. Plank of Golden; Mrs. J. Floine of Prescott, Arizona; and three sons: Chris Jr., Herman and George.

The water in the Fish Mine is being gradually lowered through the efficient pumping being carried on in the Gregory Bobtail incline. From the 800 level to the 900 foot levels, the water remains stationary and Mr. Stockbridge, the superintendent, contemplates hoisting the water from those levels, and as soon as the mine is drained, sinking operations will commence as a rich body of ore is known to be in the bottom levels that cannot be reached until the mine is drained.

The water in the Buell Mine is being lowered steadily, and on Tuesday the pumps were placed in the 400 foot level. The shaft is 600 feet in depth and it is expected by the first of the coming month that the bottom of the mine will have been reached. The pipes which carry the water from the pumps are lined with lead inside and outside and the acid water of the mine has not affected them as far as can be ascertained up to the present time.

A force of 225 men are employed by the Gold Coin Mines Company in Nevadaville, and by the parties who have recently taken hold of the Gregory Bobtail, Buell, Woods, and Buckley properties, and the number will be increased as soon as the mines are drained and put in shape for production.

The case of Minnie Williams vs. The Sleepy Hollow Mining Company, in which the plaintiff sues for $5,000 damages, will be heard before Judge DeFrance of the district court Tuesday, Feb. 23. Plaintiff asks for above damages by reason of the loss of her husband in the flooding of the Sleepy Hollow Mine on August 29, 1895, where by eleven others lost their lives at the same time, and two more in the Americas Mine, adjoining property.

END_OF_DOCUMENT_TOKEN_TO_BE_REPLACED

Benefitting the county, schools, and much more By Don Ireland   This year marks the 30th anniversary of casinos opening in the former little mining towns of Black Hawk, Central City and Cripple Creek, Colorado. In those early years, smoking was allowed inside ... END_OF_DOCUMENT_TOKEN_TO_BE_REPLACED

Benefitting the county, schools, and much more By Don Ireland   This year marks the 30th anniversary of casinos opening in the former little mining towns of Black Hawk, Central City and Cripple Creek, Colorado. In those early years, smoking was allowed inside ... END_OF_DOCUMENT_TOKEN_TO_BE_REPLACED