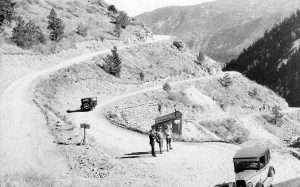 Central City folks were steamed. Early Friday morning, they moved quickly to derail plans to take away the historic train. The engine had been loaded onto a truck the day before, but the Colorado State Patrol held it up overnight while measuring the extra-large load. The truck, with engine aboard, was parked in the Big T parking lot until morning. When Angelo DiBenedetto heard the truck’s engine start about 7:00 a.m., he called John McConnell and within minutes a blockade of cars was posted in front of the parking lot. The impasse lasted into the afternoon before the engine was finally hauled away, but by then the Central City people had made their point. Both Denver papers and the television stations covered what quickly became known as “The Great Train Robbery of 1986.” That saying had been seen on T-shirts within an hour of the siege. It had all begun on Tuesday when locals found out the Central City Opera House Association had sold the four-car train that had been on display in Central for 45 years. Until Tuesday last week, the opera association had kept the news of the sale under wraps, and locals felt they should have been offered the first chance to buy the train. DiBenedetto reports that a high ranking association official told him that Central City would never be able to come up with that much money. The train was sold to the Colorado Historical Society, a taxpayer supported agency of the Colorado Department of Higher Education. The historical society planned to move the train to Silver Plume, restore it, and put it on display in conjunction with the Georgetown Loop. Last week, Bill Gossard, the chairman of the opera association, said the association needs the money. Additionally, the train was in bad repair and required attention. He said it would not have been sold without the understanding that it would be restored. DiBenedetto and a lot of other locals felt it “morally” and “sentimentally” belonged to Central City residents. The train was given to the opera association in the early 1940s by the Colorado & Southern Railroad. As Friday and the siege wore on, people gave interviews to the Denver media and the City Council contacted the town’s attorney. It was learned that there was probably no way to get a restraining order, and even if there was, it probably would entail paying the trucking company around $100 an hour to sit in the parking lot. The city fathers had no intention of spending taxpayer’s money on that. According to Alderman J.D. Carelli, the trucking company contacted the federal transportation department. It was thought federal authorities were about to get involved. The people moved their blockade, but by then the moral victory was theirs. The engine was taken away, but it will be back. Monday, Mayor William C. Russell Jr., and Aldermen Carelli, Bruce Schmalz, and Rand Anderson met with people from the state historical society and worked out an agreement. The agreement is that Central City can buy the train back for $25,000, plus the cost of transportation to and from Georgetown. That could run between $5,000 and $10,000. The rest of the train will go to Georgetown, too, because the state historical society is going to go ahead and completely restore it, at no charge to Central City; that could take a year or two. Various avenues of fund-raising are being explored. Already, a fund has been established and donations have been accepted.

Black Hawk Marshal George Armbright was seriously injured in a head-on collision with a tractor trailer Saturday. According to the report prepared by Trooper Tom Gross of the Colorado State Patrol in Golden, Armbright was proceeding west on U.S. 6 when he lost control of his car. He was driving the marshal’s patrol car. Reportedly, Armbright’s car entered the eastbound lane and partially entered the eastbound shoulder of the road. At that point his car collided with the tractor trailer driven by Darrell Wyatt of Golden. The tractor trailer pushed the patrol car sideways into the guardrail and then backwards, Gross reported. The accident occurred about seven miles west of Golden at 2:00 p.m. According to Gross, Armbright was driving an estimated 82 miles per hour. He was wearing a seatbelt. Wyatt was driving approximately 40 miles per hour. Armbright had gone to Jefferson County prior to the accident to deliver a dog to the animal shelter. He had also ordered a new windshield for the patrol car. Armbright is thought to have been in the process of responding to a hit and run accident in Black Hawk when the accident occurred, according to Mayor Bill Lorenz. As of Wednesday, Armbright was in the Intensive Care Unit at Lutheran Medical Center in Wheat Ridge. Both of his legs were injured in the accident and his wrist was broken, among other things. He was scheduled to have surgery yesterday. Wyatt was not injured. A “George Armbright Rehabilitation Fund” has been set up at the First Interstate Bank of Golden – Gilpin County facility. Anyone who may wish to contribute to the fund may make the deposit at the bank.

Mrs. Earl Quiller spent Thursday and Friday in Denver visiting friends and shopping at Kress’ and Woolsworths’ for a suitable Christmas present for her good-looking spouse.

Gary McDowell, son of Mr. and Mrs. Wm. McDowell, stepped into some hot ashes the first of the week, burning his feet severely and necessitating use of two crutches.

The first snowfall of the year entered Central City on Wednesday morning, leaving just a trace on the ground. Old Boreas seems to have skipped his annual snowfall, as usually the white flakes first appear about the middle of September. However, the moisture is badly needed and we welcome it.

Another week, and the columns of the Register Call are filled with political advertising, augmented by the Certified List of Candidates, which is a facsimile of the Official Ballot, as the election law requires, deleting, however, the P.O. Addresses, Place of Business, and Residence of each candidate. Peruse this List of Candidates carefully and be prepared to enter a voting booth and cast your vote as your conscience and intelligence will govern you. However, you can’t be too far from wrong if you vote for each candidate on the Republican ticket, and thus you will receive a free ticket to Heaven and the thanks of each and every Republican aspirant.

The teachers of both the high and grade schools are in attendance at the annual school convention in Denver Thursday and Friday, and all pupils are most jubilant for the two-day holiday.

Mr. Hugh Hughes, of Chickasha, Oklahoma, with his daughter, Mrs. Ed. Keeton and family, were visitors last week at the Rudolph Ranch. Hugh is a brother of Mrs. Rudolph and Mrs. Grenfell.

Mr. John Turner is in St. Anthony’s Hospital in Denver receiving the treatment for a blood clot in the leg.

Mrs. Thurman Leach has gone to Ottumwa, Iowa, to visit with a sister, who is quite ill.

Mrs. George Enderle was in Denver last Sunday visiting her father Bennet Moyle, who recently underwent a major operation. She reports her father on the serious list at the present time.

Mr. Kenneth Hoot was substitute minister at the Black Hawk Church, last Sunday as Rev. Gill Marvin was on the sick list.

Mr. and Mrs. Gene Enderle have moved to the Skyline Community, and are settled in the Hacker cottage.

Hoyt’s “A Trip to Chinatown” and a Fox News reel are the pictures to be shown at the Opera House Saturday evening, October 30th.

Our pleasant weather for the past month underwent a change yesterday morning when an east wind, accompanied by fog, covered the mountains with every indication of a snow storm to follow.

City marshal and street commissioner Robert C. Johnson has completed the concrete sidewalk in front of the city hall and made a first class job, and a big improvement in the looks of that portion of the city. Mr. Johnson is equal to almost any occasion and takes pride in doing his work in a first class manner. While these improvements were being made, Mr. Armfield, whose residence adjoins the city hall, concluded to have the walk in front of his property treated to a similar coat of concrete, and now that side of the street will compare with any in the city.

Truth to many is only what they want to believe.

Mr. and Mrs. Frank Fleiss left for Denver Sunday morning, the latter continuing her trip from that point to Comanche, Oklahoma, on a visit with her mother. Mr. Fleiss returned Sunday evening.

Mr. and Mrs. Rollins came up from Denver Tuesday evening, where Mr. Rollins had been in the hospital on account of the accident which he met with at the Rose City Mill a couple of weeks ago, when he had several fingers of both hands crushed under a stamp head. He is reported as getting along nicely from the injuries and operation.

Died: Mrs. Frances A. Moffat, widow of David H. Moffat, builder of the Denver & Salt Lake railroad (Moffat line) one of the west’s earliest scenic railways, died in Denver October 24th, following an operation in Mercy Hospital. Funeral arrangements await the arrival of relatives from the east. Mrs. Moffat was 86 years old. She had been ill for two weeks and underwent the operation last Monday. Surviving are a daughter, Mrs. Marcia A. McClure; a granddaughter, Mrs. Walter McClure; and a nephew, Fred G. Moffat, all of New York City.

J.F. Hopkins, manager of the Sleepy Hollow Mine, came up from Denver Tuesday to note development work on the property. He also had the pleasure of taking a nice gold retort to one of the local banks.

Mr. James P. Lefoe, of Kansas City, who has been visiting friends in this city for the past two weeks, left last Monday afternoon for Denver. He will visit other sections of the state before returning home.

Mrs. Lehmkuhl is reported as recovering rapidly from her sickness.

Harold Rickard, son of the late Alfred Rickard, arrived this week from London to act as administrator of the estate. He will remain the guest of his cousin, Mr. Forbes Rickard, for two or three months, when he will return to England and take a course at the Royal School of Mines, London.

Born: In Central City, October 19th, 1896, to the wife of John Jenkins, a daughter. Mother and child are doing nicely and Mayor Jenkins has been setting up the cigars to his friends since the happy event.

Died: In Russell Gulch, October 20th, 1896, aged 8 months, the infant daughter of Mr. and Mrs. John Ross. The funeral took place on Wednesday, interment being made in the Central City Cemetery.

Died: Sampson Uren, a young man 23 years of age, who had been in the country only six weeks, died at Mountain City on Monday last of typhoid fever. Not having any means a subscription paper was started, and in a short time enough money was raised to pay his funeral expenses, the funeral occurring on Wednesday afternoon. He leaves a mother in the old country.

END_OF_DOCUMENT_TOKEN_TO_BE_REPLACED

Where the dead get to tell their story By Jaclyn Schrock On Saturday, August 21, the Gilpin Historical Society held their annual Cemetery Crawl. Tickets allowed the shuttle of hundreds of guests from the Teller House parking lot to the Cemetery. Depending on v... END_OF_DOCUMENT_TOKEN_TO_BE_REPLACED