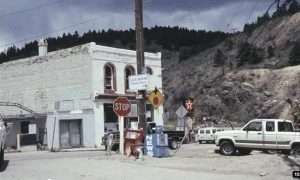 Throughout the streets of Central City jazz music of several varieties echoed from local businesses. It was a three day event for the 10th annual Central City Jazz Festival held last weekend. This year 19 jazz bands from all over the United States, Canada, and Argentina participated in the festival. The Gold Nugget Brass Band, composed of professional musicians from Denver, played two free concerts on Saturday and Sunday in the Teller House Gardens. The Fenix Jazz Band is from Argentina. The group thoroughly entertained audiences by playing New Orleans style jazz. The band’s only previous performances in the U.S. were during the 1984 and 1985 Sacramento Jubilees. Leader and pianist of the Golden Eagle Jazz Band, Dick Shooshan, made playing the piano look simple to spectators. The eight member band is from San Juan Capistrano, California. The Central City Volunteer Fire Department sold the ever popular hot dogs in Williams Stables for the festival. It was obvious that everyone enjoyed the dogs— the fire department sold 75 dozen and made over $1,000, according to Captain Couch Wolfe. Many couples enjoyed dancing to the many varieties of jazz. New Orleans jazz, Dixieland jazz, and jazz music from the ‘20s, ‘30s, and 4’0s were as popular as ever at this year’s festival. Central City has Colorado’s oldest jazz festival.

Once again, Central City, the “Queen City of the Rockies” has received adverse publicity relative to a minor disagreement between the Mayor and several of the businessmen The argument is in relation to traffic restrictions, which appear to be discriminatory inasmuch as they are not consistent, as for example – Main Street is a one-way street from the intersection with Spring Street, and cars are prohibited from parking on the east side of Main Street going south, while on Lawrence Street to the intersection, which is also designated as a one-way street, cars are allowed to park on both sides of the street with no restrictions, or with a mediocre restriction of thirty minutes, which the businessmen claim has not been enforced, and they further claim this permit has been granted as it is in front of the business of Mayor Ramstetter; also it is contended that cars on Lawrence Street reserve the right to park all night, but on Main Street, such parking is unlawful. Also, other trouble has matured when the Mayor suspended Marshal Dowse for 21 days, or until the next meeting of the City Council, giving as a reason for the suspension that Dowse had been very derelict in his duties in not placing traffic tickets on cars even for a minor infraction. Officer Eustice and Officer Smith tendered their badges to the Mayor, explaining they could not consistently perform their duties when orders were given them by others who were not members of the Council. However, the Mayor explained or intimated that only orders given by him should be obeyed, and they are again on duty.

Water Commissioner Joe Menegatti informs us that samples of water taken by a representative of the State Health Department has been returned marked “Safe.” This is a contradiction of various rumors relative to the purity of the water, and should be convincing enough to imbibe freely of H2O without risk of becoming sick or indisposed. Joe further states that he is cleaning out the intake at Miner’s Gulch, and next week will start cleaning at Peck Gulch. It is quite a Herculean task, with only two helpers, when twenty men would not be too many. However, he expects to have completed this work shortly after the first of the coming month, when the main reservoir at the head of Eureka Street will be cleaned, polished, and scrubbed, making the aqua as pure and free from microbes and germs as if it was distilled.

Sheriff Kenneth McKenzie sold the Gilpin Hotel in Black Hawk, Monday morning, to satisfy a judgment against the building, for the sum of $7,038; which was purchased by Earnest Kemm, of this city. Mr. Kemm has been operating the Silver and Gold Cafe in this city for the past several months, and it is his intention to renovate and improve the hotel, and conduct a first class establishment, catering to hotel facilities and restaurant.

Clifford I. Parsons, on his return from the Democratic National Convention in Chicago, was called to Cripple Creek by the death of his sister on Monday.

Died: Mrs. A. (Irene) Gundy of Rollinsville passed away Wednesday morning, at the age of 73 years. She had suffered a stroke the week before and has been confined to her bed since that time. She was born and raised in Central City and has been a resident of Gilpin County her entire life. She is survived by her sister, Mrs. Mary Cotter, of Rollinsville, and several other relatives. rosary services will be held at Howard’s Mortuary in Denver at 7:30 p.m., Friday evening; Mass at 9:30 a.m. in St. Mary’s Church in Central City; interment in the Catholic Cemetery.

The City of Central has decided to fix the end of the flume at the head of Main Street, adjoining the concrete bridge built by the state highway department, and have had rock hauled for that purpose.

Mrs. Sherman Harvey and daughter came up from Denver Friday last on a visit with her sister, Mrs. Charles Trenoweth, and old time friends.

Died: James Flynn; killed. Word was received here on Tuesday last that James Martin Flynn, formerly of this city, was killed near Breckenridge, in the Bell Mine that day. He was engaged in loading machine holes with powder when the explosion occurred. His home is in Denver and he is survived by his widow and five children. Mr. Flynn was a son of the late Patrick Flynn, who died here many years ago, and was a brother of Mrs. John Broil and Mrs. Fred Totman, of California.

Died: Louis Maek. Mr. Louis Maek, a pioneer of the state, and a prominent businessman of Denver, died at his home there on Friday, aged 85 years. He crossed the plains in 1860 and came to Central City, where he remained until 1878, when he moved to Denver. He is survived by his widow, Mrs. Elizabeth Maek, a son, Louis Maek Jr., and two grandchildren, Louis III and Barbara Maek. He was a brother of the late Matthew Maek, of this city, and was invested with him when the former conducted the Maek Brewery in this city.

Mr. McCann, who had been visiting relatives here for the past six weeks, left on Thursday morning of last week for his home in Fort Scott, Kansas.

Don’t forget the souvenir dance to be given at Fritz Hall on Saturday evening of this week.

Miss Helen Fairchild left during the week for New Raymer, Colorado, where she has been reengaged as music teacher at the schools in that city.

Mr. Claude Baker, of Greeley, spent the weekend with the Fairchild family.

Mrs. M.F. Brown left for Denver on Wednesday morning to meet her sister, from Fountain, Colorado, and both returned on the evening train.

Joe Stewart and Robert Brooks, colored, and Ed Phillips, an ore hauler, all of Idaho Springs, were given a preliminary hearing last Saturday before Justice of the Peace Arrighi, on the charge of stealing ore from the Justice Mine in Lake District. These men drove up to the Justice Mine shaft house Thursday night and were proceeding to fill their sacks with ore when they were discovered by W.S. Atkins of Denver, president of the Justice Mining Company, who was up on a visit and was camping near the mine. Mr. Atkins fired a shot at the parties, which scared them away empty handed that night. About midnight the same night, Marshal Gibbons of Idaho Springs saw these same men drive into that town, and when notified by Sheriff Nicholls on Friday to be on the lookout for parties trying to sell ore there, soon had the right men under arrest. At the preliminary hearing the men were all allowed bail in the sum of $500 to appear for trial on Tuesday. The parties were given a hearing before Justice Arrighi on Tuesday, when several witnesses were examined. After hearing the testimony, Phillips was discharged, as there seemed to be no case against him, but Brooks and Stewart were bound over to the January term of the District Court in the sum of $1,000. Bonds not being furnished the prisoners were placed in the county jail. Later: Brooks was released yesterday, bail having been obtained.

The continual rains of Tuesday afternoon frightened some of our citizens into a belief that a flood might be expected and in fact at 6 o’clock when the rain descended in such torrents, it seemed as if their expectations would be realized. But luckily, however, this heavy rain did not last but about ten minutes, during which time the flumes soon began to be well filled with water, and but for the ceasing of the heavy rain there is no doubt that this section would have experienced a good sized flood. However, the season of the year is getting late for floods, and it is hardy likely that we will have any floods at this late time. At Black Hawk the flood was again turned into the streets and did no damage except to leave the street in a little worse shape. The evening train’s non-arrival until nearly 10 o’clock made people think that perhaps some new roadbed had been washed away down in the canyon. The cause of this delay was owing to a land slide below Roscoe, which necessitated blasting of rock before the train could proceed to the Forks of Creek. From Forks of Creek to Black Hawk the train was compelled to slack up on account of rails being covered with sand in several places. The evening train from Denver on Wednesday was also delayed on account of sand and rocks washed on the track at Beaver Brooks. Luckily, a force of men was at work on the road, and the train was soon enabled to pass, reaching here about 10:30 o’clock.

Born: In Nevadaville, August 16th, 1896, to the wife of Roderick Putnam, a daughter.

Born: In Central City, August 17th, 1896, to the wife of Louis Hoffmeister, a daughter.