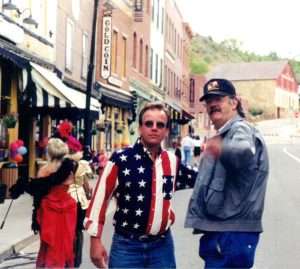 The three day Memorial Day weekend was a trying time for the Gilpin County Sheriff’s Department and members of the county ambulance service. Flight for Life from St. Anthony Hospital in Denver responded to the county on three separate occasions—two rollover car accidents and for a man that was thrown from a horse and found unconscious.

Ten Gilpin County volunteer firefighters participated in the Fifth Annual Fire & Rescue Field Days on May 17 and 18. The training even was held in Loveland, and was sponsored by the Loveland Volunteer Fire Department and Aims Community College. The seven people that attended from the Central City Volunteer Fire Department were: Gary Allen, Lowell Allen, Bob Dietz, Bob Funston, Cindy Gribble, Doug Mills, and Chuck Wolfe. The three members of the Colorado Sierra Volunteer Fire Department were: John Bertram, Charlie Blanchard, and Ted Scherer. Each person received 16 hours of hands-on and classroom training. Bertram attended the intermediate hazardous material training. That course included a review of recognition and identification of hazardous spills. It also covered pre-planning, protective equipment, railroad equipment, decontamination, river containment, and a simulated incident. Gary and Lowell Allen, Dietz, Mills, and Wolfe enhanced their knowledge in three other aspects of emergency response: vehicle fires, vehicle extrication, and farm accident rescue. The latter topic included exercises in extrication from farm machinery and the medical problems of removing someone from power take-off equipment, concepts which can be applied to mining operations and other heavy equipment use. Blanchard, Funston, Gribble, and Scherer learned and practiced skills in basic areas of firefighting. These volunteers learned procedures for building ventilation and salvage as well as for hose and ladder control. Even more challenging were the exercises covering flammable liquid spills, fires, and the notorious propane tree. The participants learned to extinguish live fires involving flammable liquids surrounding a bulk storage railroad car and a simulated fire in a bulk propane facility. The fifth portion of the class simulated a two-story, smoke-filled, house involving actual search and rescue as well as breathing apparatus.

The graduation ceremony for the Class of 1986 was held at the Gilpin County School auditorium on May 23. Music was provided by the school band as the graduates solemnly entered the auditorium. The young women wore red robes and the young men wore the classic black robes. Sammy Weitz, school counselor, spoke about the large percentage of the graduating class that will be going on for a higher education. Some of the students will be going on to college and others will be going into the service. Many of them received scholarships. A number of the graduating class were awarded scholarships from local organizations. Diplomas were handed out by the School Board President Kay Lorenz, as Principal Dan Ryan read the names of the graduating seniors. In keeping with the tradition, the graduates then flipped their tassels from the left side of their caps to the right. As the graduates proceeded out of the auditorium, many had tears in their eyes. A reception was held in the cafeteria at the school after the ceremony.

Charles and Julie Lambert of Broomfield are the proud parents of a baby girl. Lindsay Leigh was born at 2:59 a.m. on May 22, at St. Joseph Hospital in Denver. She weighed six pounds 15 ounces and measured 19 1/4 inches in length. The maternal grandparents are Van and Kay Cullar of Central City and the paternal grandparents are Mr. and Mrs. Richard Benevidez of Evergreen. The maternal great-grandparent is Mrs. Frankie Cullar of Denison, Texas. Lindsay is the Lamberts’ first child and the first grandchild of the Cullars.

Across the Crossroads by A.F. Mayhem: The old philosopher stopped by the other day and wanted to know what had become of our “Man-bites-Dog” department. Fact is that there is so much to be done keeping track of all the mining committees, thefts, gold standard, new finds, and less for more money on the plate that something just had to be slighted along with the Ten Commandments and Poetry Week, just past. Ed contributed his share, but he was vexed somewhat and had quite a qualm, insisting that Solomon wrote the Proverbs and David wrote the Psalms, and he was quite sure that Eve’s handbag matched her lipstick. In the early days Adam liked garden parties, nothing else to do, but by the time he knew the score no one played any more. Love is a bubble that never should burst, but Eve was in trouble—she found it first. There were no apple trees in the garden, Ed says, when he was there and no baggy pants to clean; no dogs to lease; no sport clothes, no money; everything was on the honor system. How the devil arrived in the garden with an apple hasn’t been explained to the satisfaction of biologists. After Adam was ousted from the garden parties, he is reputed to have addressed Eve thusly: “Through fear of taking risks in life, I’ve missed a lot of fun—the only things that I regret are those I haven’t done.”

An Invitation: You are invited to attend an Open House party, Friday evening, June 1st, at the Central Bar & Cafe, as guests of the new management, Mr. and Mrs. Lou Cohen. This invitation is extended to all residents of Gilpin County and the host and hostess assure you a most pleasant evening.

Mrs. Mattie Mosch is home from Denver where she has been in the hospital receiving treatment for a severe cold.

William C. Russell, Jr., returned Tuesday morning from a visit of a week in Claremore, Oklahoma. Bill says that he is most happy to return as the weather was pretty warm in that state.

Miss Vera Thompson and Joe Wheeler are back in Central getting the “Purple Cow” in readiness for the summer visitors.

Mrs. Minnie Morgan stopped for a few minutes visit in the Register-Call Tuesday afternoon on her way from Denver to Georgetown. She visited Bald Mountain Cemetery where her husband and son are buried.

Mr. and Mrs. Fred Ninneman and daughter, Barbara, of Lincoln, Nebraska, were weekend guests of his sister, Mrs. Forrest Goodwin and family.

The re-dedication services at the Black Hawk Church last Sunday were well attended. Rev. Paul Eisenstein was in charge of the program which consisted of words of welcome by Mayor Frank Fleiss, a vocal solo by Norman Mathias, several songs by The Gibbons Trio of Golden, a guitar special, and short talks by Mr. Sargeant and Mr. Pelon.

“The Palace of Pleasure,” a special production in six reels by Edmund Lowe, with an all-star cast and a Fox News reel will be the picture program at the Opera House Saturday evening, June 5th.

The local baseball team, which has been but recently organized, journeyed to Rollins, on Sunday last, where they crossed balls with the team of that place, where they were defeated by the score of 23 to 11. Again, on Monday afternoon, they were defeated by the score of 7 to 2, at the hands of a Denver team at the grounds in this city. Both games showed a lack of practice, inability to hit in the pitches, and listless playing. However, practicing is being carried out each evening, and it is expected that within a short time these defects can be remedied and fast, clean ball-playing predominate.

The shipments of carrots of ore from the Black Hawk depot to the smelters at Leadville, during the week of smelting ore, including one from the Atlantic Mine at Hughesville, one of concentrates from the Edna Mine, by the Rose City Mill, and one of smelting ore from the 2:40 mine in Russell Gulch.

The Arctic no-man’s land has been penetrated and Santa Claus will have to hunt for new working quarters.

Died: In Denver, at the new State Hospital, June 3, Mrs. Jane Elizabeth Stribley, aged 66 years. Mrs. Stribley was operated on last week for complications which had sapped her life for several years past, and was reported as recovering nicely when a change took place which resulted in her death. Mr. Stribley and Mrs. Welch were notified Thursday morning about two o’clock of her serious condition and left by auto, arrived at the hospital a half hour after her death. Mrs. Welch returned to Central Thursday afternoon. Mrs. Stribley had resided in Gilpin County in the neighborhood of forty years, and was beloved by all who knew her. She was a member of the Methodist Church in this city, and took great interest in church work, and was always ready and willing to aid in any way that would help the cause of religion. She is survived by her husband, Thomas Stribley, her daughter, Mrs. Willis Wolfe, and four sisters, Mrs. Milla Fraser and Miss Lillie Speer, of Denver, Mrs. Bennett of South Dakota, and Mary Rose of Engladn, to whom the sympathies of the whole community are extended in the great sorrow they have been called upon to bear. Funeral services will be held in Denver, but no date has yet been decided, and interment will be in one of the cemeteries there.

“Arrah Na Pogue” will be given at the Opera House tonight and tomorrow night by home talent, the proceeds of which will go to defray the expenses of new electric lights and general renovating of the Opera House.

A friendly game of cricket was played last Sunday on King Flats between the Central City and Mountain Daisy clubs, which ended disastrously for the former club, the Mountain Daisies scoring a decisive victory. These friendly games are productive of much good to both clubs, and when match games are played with their clubs, a strong eleven can be chosen from both teams that will represent Gilpin County and give other clubs all they can do to beat them.

While the forest fire that has been raging to the north of Central in the vicinity of Pine Creek has been a severe loss to the timber reserves in that section of the county, it will open up a large tract of land for the prospector, who has been unable to work there on account of the fallen and standing timber, and will result in many gold mines being located that otherwise would not be found at all. As between the loss of the timber and the discoveries that are sure to follow, the prospector and the county at large are the gainers.

Poor Carlo is dead, and no more will his well-known form be seen at the Mineral Palace. He was only a dog, but one which a good pile of gold dust could not have bought when alive. Could it, Joe?

Jim Swim, of the Champion Mine in Nevadaville, returned from Denver on Monday.

Jake Birkenmaier, of the Teller House, went to Denver on Saturday to attend to business matters, and incidentally for a little recreation.

Mrs. Saunders, of Golden, who has been visiting her sister, Mrs. S. Rule, of Mountain City, was called to her home on Wednesday on account of the illness of a child.

Born: In Central City, May 24th, 1896, to the wife of Joseph Thompson, a daughter. Mother and child are both doing well, and the happy father wears a wreath of smiles on his face.

Died: In Denver, May 27th, 1896, J.B. Tomlinson, aged 64 years. Mr. Tomlinson will be remembered by many people of Gilpin County, having resided in Black Hawk for many years. His funeral takes place this afternoon from his residence.