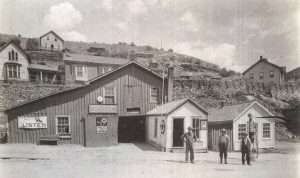 The identity of two alleged burglars have been confirmed by the Gilpin County Sheriff’s Department. James E. Vanegas, 20, of Thornton was incarcerated into the Gilpin County jail on April 11, after a warrant was issued for his arrest. He is being charged with three counts of second degree burglary and three counts of felony theft. A second warrant was issued for the arrest of Glen A. Mascarenas, 21, of Denver. The sheriff’s department is waiting for him to be extradited from the Jefferson County jail. He is charged with the same offenses as Venegas. Venegas, Mascarenas, and a third suspect, Dennis O’Shea, 18, of Denver allegedly burglarized two cabins in Apex and a home in Missouri Lakes #2 on February 20. After the incident occurred, they were able to avoid the Colorado State Patrol in a van that was reportedly stolen from Denver in January. O’Shea was apprehended in Jefferson County after the alleged incident occurred. Venegas and Mascarenas reportedly escaped from the location by getting a ride from an unknown person. Bail for Venegas and Mascarenas is set at $25,000. O’Shea appeared in Gilpin County Court on March 11 for a bond reduction hearing. The bond was reduced to $10,000. He is scheduled to appear in court for a preliminary hearing this month.

Kim Foster is one of the participants in the Miss Pre-Teen Colorado Pageant. It will be held in Denver at the Marriott Hotel on August 30 and 31. According to Kim, five of the participants will be selected in the pageant on Saturday and again participate in the contest on Sunday. Only one finalist will be named Miss Pre-Teen Colorado. Kim will be judged on talent, giving a speech, and in a photogenic contest. She says that she will be doing a Highland Scottish dance. Other categories include a personal interview, wearing a “long party dress and a suit or a dressy dress,” Kim adds. Kim is in the fourth grade at Nederland Elementary School. Her parents are Gilbert and Gracie Foster of Gilpin County.

Marlys Hammond, daughter of Cecilia Kelsey of Black Hawk has been named the co-chairperson of Pi Mu Delta’s Health Fair Committee at Lake Forest College in Illinois. Pi Mu Delta, a purpose unit, draws its members from students intending to pursue a career in the medical sciences. It promotes an environment of scholarship and cooperation. Pi Mu Delta co-sponsors many activities as well as lectures on health related topics. It also serves as a backup for the Health Careers Advisory Council and the career planning and placement office by providing pre-health students with useful information about career opportunities, course selection, and appropriate test preparation for professional schools. Hammond, a junior, is a graduate of Clear Creek Secondary School.

Almost two feet of snow fell in this vicinity on Saturday, and roads were almost impassable. County Commissioner Martin Nelson had every piece of equipment in his district busy until the wee small hours of Sunday morning clearing all roads and making traffic possible. He and his crew are to be congratulated. Sunday, a warm chinook wind and bright sunshine dissipated the snow rapidly and by Monday morning all traces of the “beautiful” had been obliterated.

Miss Caroline Bancroft, of Denver, has written a new book entitled “The Unsinkable Mrs. Brown,” and is now being published. It is an accurate account of this celebrated personage, written in the inimitable style of Miss Bancroft, and we feel sure will find a wide audience.

The Gilpin County Teachers Association met at the Collinsville schoolhouse Monday evening as guests of Mrs. Vivian Amy and Mrs. Mary Cotter. After a business meeting, slides of Mexico were shown by Mr. Ray LaZotte, and were greatly enjoyed.

Henry J. Stahl was up from Denver last week looking after his real estate holdings and visiting friends. He is feeling much better after an operation and wants to come back here and run races with “Curley” McLaughlin and Oscar Williams.

Mrs. May Cassidy is now settled in the old Tiller house on Third High Street and experts to remain here during the summer.

Mr. and Mrs. Wm. Hamilton were taken to one of the Denver hospitals Wednesday afternoon by Robert Brown for treatment. Both have been ill for several days and it is hoped their stay in the hospital will be one of short duration.

Among the baseball fans at the exhibition game at Bear’s Stadium between the St. Louis Cardinals and Chicago White Sox last Thursday afternoon, were Tom Collins, Charles Robins, Joe Menegotti, and Dick Dowse.

Mr. and Mrs. Silvia Parteli were up from Golden over the weekend renovating their house on Main St. They expect over-night guests for the Fireman’s dance on May 5th.

Mr. Githens, of Idaho Springs, owner of the Black Hawk Motel, has had several tenants since opening the place this week.

Mrs. George Enderle had a very pleasant surprise Tuesday when her son Joe called by long distance from San Diego Navy Base to wish her a happy birthday.

Died: Noah Williams died Tuesday morning at Colorado General Hospital in Denver, where he has been for the past three months. He was 66. Noah was born in Cornwall, England, and came to the U.S. and Gilpin County in 1914, residing in Nevadaville until 1921 when he moved to this city. He followed mining all his life, working in the tin mines of Cornwall, and various mines in this county, and was considered as one of the best miners in this vicinity. He also was the last of the original “Cousin Jacks” living in the county, and was well liked by all who knew him. Funeral arrangements will be under the direction of the Howard Mortuary of Denver, with funeral services at the Methodist Church this city Saturday afternoon at 1:30 o’clock, with interment in the Bald Mountain Cemetery.

“When the Door Opened,” an Oliver Curwood picture of the far North in seven reels, and a Fox News reel will be the program at the Opera House Saturday evening, April 24th.

Methodist Church Notes: We were glad to see those faithful folks back again Sunday, who have been absent because of illness. Mr. J.D. Richards is back on duty again, after an illness which kept him from the services for three weeks. Mrs. C.O. Richards is again at her accustomed post. We missed her during her absence of several weeks. Mrs. Ed. Lindquist, at Black Hawk, is again with us in that city. She reports as having had a fine time during her trip to the sunny southwest. Dr. Lace is to be in Central on Sunday at 11 o’clock. A business meeting will probably be held. All are invited to be present. Communion Services will be held. As Dr. Love will not be able to be with us in the evening at Black Hawk, he would like to meet the folks at the church at 2 o’clock Sunday afternoon.

Three shifts of engineers are being kept busy at the 2:40 mine to keep the water down so that work can progress.

Harry Matthews and a party of Golden friends were here on Sunday visiting old time neighbors.

Mr. Hutchinson, who is working the Specie Tunnel, returned from a business trip to Denver on Friday.

The Pueblo Evening Call says that George Maloney, formerly of Central City, will play first base this summer with the Rovers baseball team of that city. George is a valuable man in any part of the field, but why should he not be placed in his regular position as catcher?

Mr. Miller, the affable gentleman who keeps the eating house at Forks Creek, has had an addition built to his already large quarters, and is having the same painted and fitted up in good shape. Landlord Miller expects a big trade during the coming summer, as the road has been advertised considerably of late.

Mrs. R.B. Williams came up from Denver on Wednesday afternoon’s train, after hearing of the accident to her husband, and Oscar Williams came up on Thursday morning, having been in St. Luke’s Hospital where an operation was performed on him two weeks ago.

An Old Producer to be Started Up: Work has commenced on the Wautauga workings in Russell District on Tuesday morning, in the way of repairing and putting the shaft in condition. A contract has been given out for the erection of a new shaft house, which will be 20×56 feet, and new machinery will be put in, consisting of a 25 h.p. double friction hoister and a 30 h.p. boiler. It is expected that the shaft house will be up and everything in readiness to start work by the 1st of May. The shaft is in bad condition and will probably need retimbering to the bottom. There is 240 feet of water in the shaft, which is 300 feet deep, and owing to the property remaining idle so long, the timbering has become rotten from the effects of water. The Wautauga has not been worked since 1885, up to which time it was credited with an output of $100,000, the ore averaging 3 and 4 ounces in gold and 6 to 7 ounces in silver. It is a patented claim, being one of the oldest in Russell District, and is owned by the Calumet Gold Mining & Milling Company. G.K. Kimball, Jr., of Golden, is interested in the property, and will act as general manager When the property is once fairly started, they expect to work the mine on a big scale and develop it into a large producer.

Died: At Albany, on the west coast of Australia, on March 27th, 1896, Mr. Alfred Rickard, aged 50 years. Mr. Forbes Rickard received the sad news of his uncle’s death on Wednesday, but not the full particulars. The deceased gentleman was well known in Gilpin County and throughout Colorado, and for a period extending over several years had charge of the California Mine, also the Gold Coins properties, in Nevadaville. He leaves a wife and five children in London, England.

END_OF_DOCUMENT_TOKEN_TO_BE_REPLACED

Where the dead get to tell their story By Jaclyn Schrock On Saturday, August 21, the Gilpin Historical Society held their annual Cemetery Crawl. Tickets allowed the shuttle of hundreds of guests from the Teller House parking lot to the Cemetery. Depending on v... END_OF_DOCUMENT_TOKEN_TO_BE_REPLACED