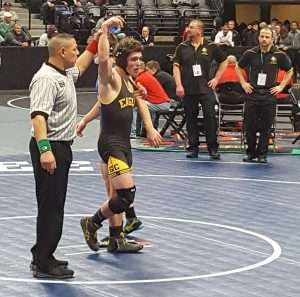 Gilpin’s top wrestler best in past 15 years at school

Senior Josh Trujillo represented Gilpin High School at the 2018 Colorado state wrestling tournament at the Pepsi Center last weekend. The event, which ran from Thursday, February 15 through Saturday, February 17, crowned champions in each of 14 weights from Class 2A through 5A.

Trujillo went to the state tourney last year as well. Since this was his second go-round, he knew what to expect. Nearly 40,000 spectators jam into the arena during the three days, and the stakes are higher than for any other tournament during the season.

“We walked through the tunnels, like the Nuggets and the Avalanche, to get to the mat on the floor of the Pepsi Center,” Trujillo reported. “There are lights and music – it’s a lot to get used to. This year I felt more comfortable.”

He added that not that many people come out for high school tournaments, but the state event is different. Since it’s the highest level of wrestling in the state, more people come out, including those who would not otherwise attend a wrestling competition.

Trujillo wrestled four matches in the 152-pound weight class at the 2A level. His first was a preliminary match on Thursday evening against Simla opponent Michael Rode , which Trujillo won 10-3. On Friday morning, he went against Trevor Randel from County Line.

Rode went on to win a first place title.

Trujillo had better luck Friday night, when he pinned a rival from Rocky Ford in a consolation match. Saturday morning’s test was for the podium, but Trujillo lost 5-0 to Cade Hillman from Wray. Wray, in fact, went on to capture its first 2A state team title in thirty years.

Trujillo commented on the role the crowd plays during this overwhelming scene.

“Gilpin is not traditionally a big wrestling school. The crowd isn’t cheering for you unless you are wrestling well. The people from Wray were going nuts the whole time. Last year, I tried to shut out the crowd noise, but this year I just took in the environment and accepted it. When I wrestle, I try to relax and let my preparation take over.”

Gilpin’s top wrestler started to get serious about the sport when he was in sixth grade.

“I really like the sport, because it depends on how much work you want to put in. It doesn’t matter whether you are from a small school or what position on the team you are on. Wrestling has helped with my work ethic. When you face challenges in life, you know they won’t be as hard as Monday morning practice!”

He expressed gratitude toward his teammates. “They were great. We started serious practice the day after the state tournament last year. We had new additions to the team, but my teammates were with me in the room for a full year of hard work. And the coaches drove us to every wrestling opportunity available. Without them, we not have been able to achieve as much.”

Head Wrestling Coach Pete Morgan had a few words. “Josh made it as deep into the tournament as you can possibly go without getting on the podium. He lost a close decision in the blood round on the third day of the tournament to Cade Hillman of Wray, the same kid who gave him his only loss at regionals last week. Josh is an incredibly hard worker who has brought respectability to our school and program. In the past two years, his overall record was 60 and 20. Something no one from our school has matched in fifteen years.”

Morgan explained, “Wrestling is an individual sport that forces you to stand up to adversity, and you are forced to step up or stand down. Josh faced every battle, stood tall in every fight, and rose to the very top. His drive, attitude, and perseverance will be deeply missed.”

END_OF_DOCUMENT_TOKEN_TO_BE_REPLACED

Benefitting the county, schools, and much more By Don Ireland   This year marks the 30th anniversary of casinos opening in the former little mining towns of Black Hawk, Central City and Cripple Creek, Colorado. In those early years, smoking was allowed inside ... END_OF_DOCUMENT_TOKEN_TO_BE_REPLACED