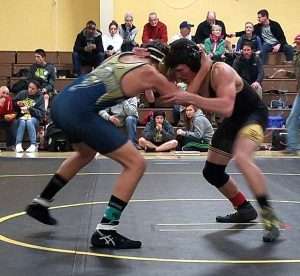 The regular season has officially come to an end and Gilpin County’s own Josh Trujillo (24-7) finds himself ranked 13th in the State of Colorado at 145lbs. Trujillo has absolutely dominated since winter break and is heading into Regionals with a lot of momentum having won 15 of his last 17 matches.

Freshman Mike Wenholz ended his first regular high school season with a solid winning record of 17-13, an amazing accomplishment for a 14 year old competing against mostly larger 3a and 4a schools.

On Saturday, January 21st, the High School team competed at the Kiowa Invitational. Josh Trujillo marched right through the competition with two quick pins and a 7-0 victory in the finals on his way to First Place. Mike Wenholz failed to make weight at 113 and had to wrestle up a weight class at 120 for the first time. Not only was Wenholz wrestling up, the entire bracket of 14 wrestlers had winning records and yet he still battled his way to 5th.

On Wednesday, January 25th, the Gilpin Wrestlers hosted a triangular meet against Summit and Evergreen. Forfeits doomed the team with two losses, but this was a special night none the less. Junior Josh Trujillo in his fifth year of wrestling for Gilpin County, finally got to wrestle his first match at his own school ever. Trujillo lost that match 4-5 giving up an escape as time expired to Ethan Davis of Evergreen. The night ended on a high note when Freshman Mike Wenholz, down by one point in the 3rd period, caught and pinned Brandon Daniels of Summit County.

On Saturday January 28th Gilpin hosted its first High School Invitational in almost 20 years. Josh Trujillo went 5-0 on the day and took first. Trujillo avenged his loss from a few days earlier and dominated Davis of Evergreen winning 3-1. Wenholz went 3-2 on the day on his way to 3rd place.

END_OF_DOCUMENT_TOKEN_TO_BE_REPLACED

Benefitting the county, schools, and much more By Don Ireland   This year marks the 30th anniversary of casinos opening in the former little mining towns of Black Hawk, Central City and Cripple Creek, Colorado. In those early years, smoking was allowed inside ... END_OF_DOCUMENT_TOKEN_TO_BE_REPLACED