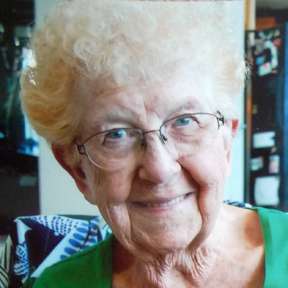 Trudie Dunbar, well know resident of Central City, died peacefully Wednesday, January 9th, after losing a lengthy battle with lung cancer. She was in residence at the Life Care Center of Evergreen at the time of her passing. She was 87 years old.

Born Gertrude A. McCoy to Parker and Anna McCoy on May 2, 1925 in Blair, Nebraska, she was the youngest of nine children, all of whom preceded her in death.

She married Douglas Rued on November 3, 1945 in Denver. They had three children Susan, Marvin and Todd. Douglas died in 1978.

Trudie and Harely Dunbar were married on April 4, 1986 and moved to Central City in 1990. Harley preceded her in death on December 7, 2005.
Trudie is survived by her children, Susan Pearce of this city, Marvin Rued of Aurora and Todd Rued of Longmont: four grandchildren; Susan’s daughters Jaime (Derrick) Adams, Breanne (Mark) Fraley and Marvin and his boys Rodney and Shane, five great grandchildren; Kaleb and Karlee Adams and Xavier, Sebastian and Greta Fraley. Trudie also had numerous nieces and nephews.

Trudie was an artist, working in oil and acrylic paints and jewelry creation. She was an avid gardener and loved to sing. She had a reverence for trees and clouds and displayed an abiding faith which she often shared with others. Her greatest affection was for her family and friends, her church, and the community.

Her love of life and vitality will be greatly missed.

A memorial service will be held at St. Paul’s Episcopal Church on February 1st at 1:30 p.m., with a repast to follow.