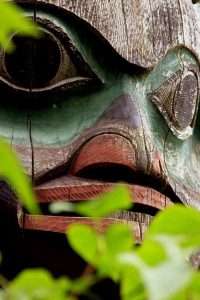 One of the most recognizable icons of the Pacific Northwest is that of the totem pole. Found only from Washington to Southeast Alaska, totem poles’ origins are traced to much smaller decorative carvings on interior and exterior house posts. Progressing over time into funerary containers, memorial markers, welcome signs, and symbols of families’ prestige, the art form of totem poles would eventually attain a height of 132 feet from a single western red cedar.

Every pole tells a story which to be fully understood, one would have had to have attended the raising, dedication, and potlatch (ceremonial feast.) Quite often colorful eagles, ravens, bears, beavers, wolves, foxes, frogs, killer whales, and people are depicted on totems representing characters and events in a narrative. Legends such as the thunderbird are frequently included as are clan lineages. The word “totem” is derived from the Algonquin “odoodem” meaning “his kinship group.”

Totem poles can also be intended as items of ridicule. Called “ridicule” or “shame poles,” a good example of one can be seen on Chief Shakes Island in Wrangell, Alaska. Known as the Three Frogs Totem, it was erected when three slaves of Chief Shakes brought three Kiksadi women into the fold. When the Kiksadi chief was presented with a bill from Chief Shakes for the women’s upkeep and maintenance, he refused to pay; resulting in the Three Frogs Totem being raised by a disgruntled Shakes.

Another ridicule pole of note in Saxman, AK, shames former U.S. Secretary of State William H. Seward for his failure to reciprocate in kind to the Tlingits’ hospitality and good intentions during and after potlatches held in his honor. Seward’s ears are painted red for his lack of listening skills. More recently raised, in Cordova, AK, Exxon CEO Lee Raymond’s grotesquely distorted face graces a ridicule pole for nonpayment of five million dollars in punitive damages associated with the Exxon Valdez oil spill in Prince William Sound.

With assimilation of native peoples, by the turn of the twentieth century, nearly all production of totem poles had ceased. In 1938, the U.S. Forest Service began preserving and reconstructing two hundred deteriorating totem poles – approximately one third of totems known to have stood in the year 1900. The Totem Heritage Center in Ketchikan, AK, houses specimens that are over 150 years old. Interest since the 1960s in Indian culture has resulted in new generations of native totem pole artists.

END_OF_DOCUMENT_TOKEN_TO_BE_REPLACED

Where the dead get to tell their story By Jaclyn Schrock On Saturday, August 21, the Gilpin Historical Society held their annual Cemetery Crawl. Tickets allowed the shuttle of hundreds of guests from the Teller House parking lot to the Cemetery. Depending on v... END_OF_DOCUMENT_TOKEN_TO_BE_REPLACED