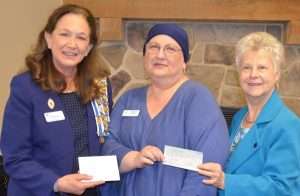 Daughters of the American Revolution keep history alive while they serve

Combine all these, and you have the Daughters of the American Revolution (DAR), an organization that exists to make a difference in communities across the country and honor family heritage while being relevant for today.

I was privileged to get an inside look at the DAR when I was a guest at the January meeting of the Mountain Rendezvous Chapter at the Ascent Church in Evergreen on Monday this week. The members were warm and friendly and presented an enlightening and inspiring program along with their regular business agenda. About 30 women attended. The typical attendance is about 60, and the chapter has a total of 140 members.

The purposes of DAR include historic preservation, such as restoring and preserving historical sites and genealogical records and memorializing people and events throughout American history; educating America’s youth, providing scholarships, and rewarding good citizenship; volunteering time to meet the needs of veterans; and helping immigrants become naturalized citizens.

DAR members are those who can prove lineal descent from a patriot of the American Revolution. The organization was founded in 1890, and since its inception, has admitted more than 930,000 members. The DAR currently has 185,000 members in 3,000 chapters nationally and internationally. Colorado has 46 chapters, including Evergreen, Golden, and Boulder.

The Mountain Rendezvous Chapter was organized in 1981 and includes members from two countries, 14 states, and 13 Colorado counties. The chapter’s name honors festive gatherings of the fur traders and mountain men who founded Colorado.

I traveled to the local meeting with members Kay Lorenz and Kathleen Schrader, who filled me in on a little DAR background. To find out about your ancestry, you should find out as much as you can from asking your own family. You can do all your own research, as Kay did, or you can give the information you have to a DAR registrar, who will help you look up information and will actually do much of the research. You can get assistance from a local chapter, and the national DAR also has archives and a library in Washington, DC. It costs $120 and takes several months for the DAR to do the research, but when the information is validated and recorded, you really know the facts. Interestingly, while doing research, many members discover that they have mutual ancestors.

The Mountain Rendezvous Chapter presents informational speakers at each monthly meeting. Past programs have included firefighters, a presentation on the Amache Japanese internment camp in Granada, Colorado in 1942-1945, and a display of Molly Brown hats.

I noticed that several of the members wore an array of pins. The women explained the significance of the various decorations: the DAR insignia with 13 stars, pins for each patriot in one’s lineage, state pins of the patriots, a chapter bar, museum pins, and service pins.

After a meet-and-greet and a refreshing brunch around tables decked out with flag-themed centerpieces, the meeting was called to order by Vice Regent Fran McVeigh, who declared the meeting “in session in the 241st Year of Our Independence.”

All rose for responsive devotions led by Chaplain Kathleen Schrader, then remained standing while reciting the Pledge of Allegiance, American’s Creed, and Preamble to the Constitution.

Following the patriotic exercises, the chapter heard presentations by two special speakers. The first was Michelle Mallin, Chief of Staff and co-founder of the non-profit Honor Bell Foundation, which is based in Denver.

Mallin explained the mission and goals of The Honor Bell Foundation, presenting the story of The Honor Bell through slides and an informative video of how this group is honoring our nation’s veterans by providing this magnificent instrument for military funerals. The Evergreen chapter was pleased to donate a check for $700 to the Foundation to assist in its work.

The second presenter was DAR member and DAR museum docent Sloan Schwindt. Her talk was entitled, “Archeology and Me: My Life in Ruins.”

Schwindt’s talents include handwork — she has stitched for the Pennsylvania Renaissance Fair, served as costume and makeup director, and continues to serve as an heirloom sewing instructor.

She is also a professional archeologist, with a Master’s Degree in anthropology from Wheaton College in Massachusetts and a Master’s Degree in Archeology and Museum Studies from the University of Denver. She has published numerous articles and has participated in or directed excavation of bison kill and processing sites and Pueblo ruins.

Schwindt related her life-long passion for North American archeology, the sites on which she worked, and her three-plus years of employment with the Smithsonian Institute.

When Schwindt and her husband married, one of their wedding presents was a Pueblo II site (dubbed the “Honeymoon Site”) that was on a family member’s farm. Around 1987, she began the Fort Collins chapter of the Colorado Archeological Society and proposed that the members do an excavation of the Honeymoon Site. Over seven weeks, she supervised 90 volunteers. The site yielded scores of sherds and lithic fragments.

After a move to Michigan for several years, Schwindt and her family returned to Colorado. She is now involved in volunteer work and serves on the Archeology and Historic Preservation Committee of History Colorado, which awards millions of dollars to worthy projects all over the state.

Schwindt displayed several artifacts for the members’ interest and gratefully received a DAR donation in honor of her mother.

The next item on the agenda was the reading of a message from national DAR President General Ann Turner Dillon. Dillon is the first President General from Colorado. Her letter recounted the DAR’s busy 2017, including restoration work done on the Constitution Hall stage and the Connecticut Board Room. Work was begun on the DAR museum gallery. DAR made a gift to the nation of 76 trees at Independence National Historical Park in Philadelphia to begin the celebration of the nation’s 250th anniversary.

Member Joy Poirot brought the National Defense message, which was somewhat troubling. Only three people in ten can now qualify for the military, she advised. There are 20 million people aged 17-21 in the U.S. today; of these, there are only half a million potential recruits who meet qualifications, Poirot said. The DAR’s National Defense Committee, in considering this supply and demand challenge, has a mission to ensure a strong defense. Members were exhorted to pay attention to Congress’ actions pertaining to the military.

Additional business included welcoming guests and prospective members, hearing various reports by officers, appointing a nominating committee to get a slate of officers to vote on in March, and selecting delegates to the state conference in Colorado Springs in May. The chapter will assist with registrations and meal ticket counting at the conference. The group was also invited to a tea at the Stroehle House on May 19, with proceeds to benefit the Gilpin Historical Society.

The chapter’s silent auction at its December luncheon raised $1,255. It was decided to give $700, or 56 percent, of those funds to the Honor Bell Foundation, rather than 100 percent as originally voted. The rest of the funds will perhaps go for operating expenses, but a recommendation for their use will be made in February.

Jenn Latini reported on Veterans Day activities; the chapter had prepared thank-you posters for veterans in life care, decorated their doors, and distributed bags with certificates of appreciation and several patriotic items. A veterans’ Christmas party was held at the Volunteers of America Building on Santa Fe, where the chapter donated five gift bags of clothing and household items and several $25 gift cards.

The next regular meeting will be on February 3 at 10:30 at the Ascent Church, when the program will include Good Citizens Recognition Day. High school seniors from area schools will read an essay to the Chapter and will receive a certificate, a pin, and a check. One of the five students will be the overall winner and will be entered in the state contest. The students are Katelyn Armstrong (Gilpin), Grace Werlin (Clear Creek), Alexandra Mason (Evergreen), Riley Morgenthaler (Conifer), and Emma Heineman (Platte Canyon).

The meeting concluded with the benediction by Chaplain Schrader.

END_OF_DOCUMENT_TOKEN_TO_BE_REPLACED

Benefitting the county, schools, and much more By Don Ireland   This year marks the 30th anniversary of casinos opening in the former little mining towns of Black Hawk, Central City and Cripple Creek, Colorado. In those early years, smoking was allowed inside ... END_OF_DOCUMENT_TOKEN_TO_BE_REPLACED