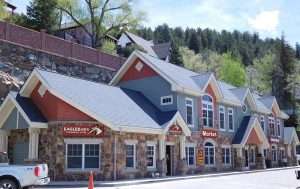 Folks pulling in at the U.S. Post Office or the Mountain Mocha Café on Clear Creek Street in Black Hawk will notice that a new convenience store has joined the neighborhood. EAGLESmart is a joint project of the Gilpin County Education Foundation (GCEF), the City of Black Hawk, and the Gilpin County School District. The goal is to offer high school students a vocational experience in working at the store at the same time that they earn school credit.

A grand opening is projected for the weekend of July 4th.

The convenience store project was initially the idea of Craig Holmes, president of both the GCEF and the Gilpin County Board of Education. He had read an article in the paper reporting that Black Hawk was looking to rent a vacant space on Clear Creek Street and that the City was interested in having a convenience market go in.

When Holmes saw the real estate sign go up, he was next door having coffee with school Superintendent David MacKenzie. A light bulb went on in Holmes’ mind, and he shared his idea for a store that would provide work experience and class credit for students from Gilpin County High School, home of the Eagles. MacKenzie supported the idea, so Holmes called Black Hawk’s City Manager, Jack Lewis, who was also interested. EAGLESmart was born.

Holmes and store manager Mike Patterson were pumped with excitement when this reporter visited the store on Wednesday, June 8. Just a couple of hours earlier, they had received the certificate of occupancy and the business license. They were in the midst of cleaning, stocking shelves, and pricing items, but took a break to explain the project.

“The vocational opportunities are huge,” Holmes enthused. “Students will get life experience through customer service.” As a businessman and entrepreneur, Holmes is determined to help the younger generation develop a solid work ethic.

“Our motto will be ‘To delight every customer.’ The students will learn to say ‘please’ and ‘thank you.’”

He also believes that once word of the store gets around, other school districts will want to check it out as a model.

MacKenzie and teacher Sunny Vincent are working on a curriculum for the business course, which Vincent will teach as an elective. Work in the store would likely be alternated with class instruction. The school will transport the students to and from the store.

Students must be 17 years old to operate the cash drawer, Holmes said, but younger students may also work there in various capacities. Patterson will oversee from eight to 16 students per semester, two or three at a time.

The students will get practical experience in c-store skills: doing inventory control, learning about payroll, running a cash register, monitoring the security video cameras, and doing a plan-o-gram (photo representation of what’s on the store’s shelves). They’ll learn to interact with the customers and practice the fine art of offering items customers may not have considered. “I see you are getting milk; would you like a package of cookies to go with that?”

They will work during class and get paid for working. Those who worked in the store over the school year and displayed the most initiative will be considered first for next summer’s job hiring.

GCEF owns the store inventory as a non-profit. Holmes said, “It’s a funding arm for GCEF. Whatever is left after operating expenses will be used to fund Gilpin school arts and athletic programs, scholarships, grants, and so forth. We gave away $7,500 in scholarships this past year and expect to be able to donate ten times more through the store.”

The school district will hire two or three new adult employees to operate the store, with GCEF paying the district a management fee to cover salary and benefits.

Holmes couldn’t say enough about the City. “They’ve really stepped up and been very gracious, remodeling the space on their own dime and renting it to GCEF at cost, so we got a good rate on the lease. What they do for the school is huge, with the $6,000 in scholarships they give to every graduating senior each year.”

Holmes said the GCEF Board of Directors was unanimous in supporting the store and had even held its meeting at the site on Monday evening, June 6. The school board is also fully supportive. A couple of the City Aldermen, Paul Bennett and Linda Armbright, have also stopped by to see the layout.

The store is airy and attractive, with bold primary colors on the walls. When a customer enters, his eyes will be drawn immediately to two things: an eagle logo on a bright yellow wall, and the store’s candy items. Salty snacks of all kinds, groceries, auto products, and charcoal and lighter fluid fill the center shelves.

Along the back wall are all kinds of comforts – a coffee machine, two kinds of cappuccino, hot chocolate, iced tea, and fountain drinks. Plans are in the works for a slushy machine, nacho machine, and a roller grill for hot dogs. A microwave stands ready to heat sandwiches, and a popcorn popper will be pressed into service for special events.

The side wall is painted blue, appropriately denoting chilled items. Coolers along this wall are ready for milk, juice, Pepsi and Coke products, ice cream, deli sandwiches, and frozen pizzas, and EAGLESmart will also boast a freezer for novelty ice cream treats. The GCEF logo will be placed above the coolers, along with works created by Gilpin school “artists of the month.”

The front wall is reserved for local products, such as Manley’s Barbecue Sauce, products from Mountain Mocha, and other unique items.

Gilpin Booster wear hangs neatly on the wall by the front counter, and some Black Hawk apparel will soon be available. Sunglasses and hats will round out the general merchandise.

“We’ll have a lotto terminal and scratch tickets, a cigarette rack and sundries – toiletries that a guest in the nearby casino hotels might run out of. That would provide a marketing opportunity for the students, as they may go to the hotels to let them know what their guests could find at EAGLESmart,” said Holmes.

There is an office where the students will work, which also houses a BIB (bag in box) rack containing syrup for the fountain drinks. Adjacent to the office is a storage room for back stock.

“For example, we expect to sell 50 gallons of milk per week, but we only have room out front for 20. There will be a cooler in the storage room for the extra milk,” Holmes reported.

He also showed a space that will eventually contain a finished kitchen.

To top off the tour, Holmes proudly pointed out the U.S. flag donated by the Elks Lodge.

GCEF is still working on signage for the store front. The group challenged students to submit concepts for the sign logo, which will contain elements of the winning design. Before the sign is built, the logo must be presented at the Black Hawk City Council meeting on June 22 for approval.

“All logo concept student designs were award-worthy, so each artist will be rewarded with a $10 EAGLESmart gift certificate,” Blondo said.

The City will also permit banners to be used for special events, such as the grand opening.

The project is a natural fit for Holmes, who has been in the convenience store field for 38 years. He is currently the zone manager for fuel and convenience retailer CST brands. CST sells fuel under the Valero and Diamond Shamrock brands and also has the Corner Store convenience chain. Holmes oversees 75 stores in Colorado and one in Farmington, New Mexico. He has extensive experience in Gilpin’s economic development also, helping set up the Bobtail Corner Store and helping with gas installation at the Base Camp campground on Highway 46 and at Taggart’s Country Store on Highway 119. He and his family have lived in Gilpin County for 17 years.

EAGLESmart manager Mike Patterson’s management experience includes the local casinos and Pizza Hut and operating Three Brothers Printing and the Bobtail Corner Store. Gilpin County has been his home for the past 25 years.

“I’m excited to work with the kids,” Patterson said. “I started working at the store a couple of months ago, making sure that we were in compliance with the required health codes.” Patterson also helped install the equipment. He noted, “Our pricing will be competitive with other local stores.”

END_OF_DOCUMENT_TOKEN_TO_BE_REPLACED

Benefitting the county, schools, and much more By Don Ireland   This year marks the 30th anniversary of casinos opening in the former little mining towns of Black Hawk, Central City and Cripple Creek, Colorado. In those early years, smoking was allowed inside ... END_OF_DOCUMENT_TOKEN_TO_BE_REPLACED

Benefitting the county, schools, and much more By Don Ireland   This year marks the 30th anniversary of casinos opening in the former little mining towns of Black Hawk, Central City and Cripple Creek, Colorado. In those early years, smoking was allowed inside ... END_OF_DOCUMENT_TOKEN_TO_BE_REPLACED