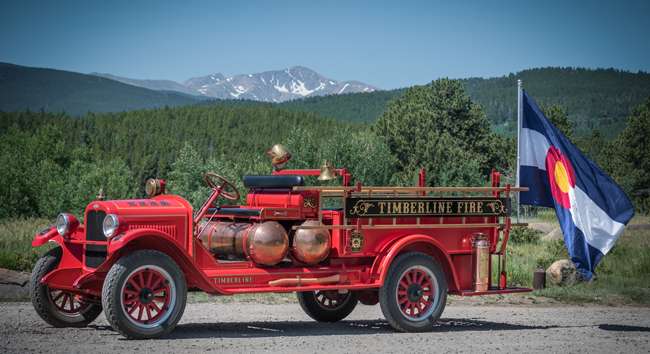 The Timberline Fire Protection District “Parade One” fire truck made its first public appearance in the Nederland 4th of July Parade. The 1924 Chevrolet Obenchain-Boyer Chemical Engine was a gift to the district to “honor the men and woman of Gilpin and Boulder Counties and their supporting families who serve the community as volunteer fire fighters past, present, and future.”

The engine first saw service in Topsfield, MA. It then found service at Basin Harbor, VT where it was purchased and completely restored by Mr. Raymond Schneider and members of his family in Burlington, VT. The two 35 gallon copper tanks held a mixture of water and bicarbonate of soda. A hermetically sealed glass bottle of sulfuric acid placed into the tank would be broken by an operating lever when needed. A hand crank located on one end of the tank would then stir or agitate the mixture. The chemical reaction created carbon dioxide. The pressure within the tank could grow to 1,000 psi and in effect, created its own propellant. One tank then alternated with the other, each being refilled after the 35 gallons had expired. It is very unique engine and quite rare for these tanks to have survived as most of the copper tanks were scrapped for the war effort of WW2.

It is hard to imagine that almost 100 years ago this chemical engine was state of the art. The Chevrolet truck features a 4 cylinder 35 horse power engine that can approach speeds of 30-35 miles an hour on flat level roads! It replaced the bucket brigades and horse drawn steam carts and engines of the time.

Today, of course, the Timberline FPD utilizes a variety of fire engines and emergency response vehicles. For example, our Tender Wolves carry 2,000 gallons of water and equipment, a 750 gallon per minute pump that can push four hose outlets at 150 gallons per minute. The four-wheel drive engines are designed for our mountain wildland urban interface.

Parade One, in its 94th year, is in service again for county and Front Range events including parades, county service activities, and special events. Rides for all ages will be offered at the upcoming Gilpin County Fair. The hose and equipment storage area has been converted to two benches that will accommodate up to eight passengers

TFPD would like to sincerely thank Mark Johnson and his staff at Husky Creative/ Husky Graphics and Signs in Boulder, CO for their design and craftsmanship in the application of the gold leaf lettering on the engine.

The “Parade One” fire truck brought many smiles, thumbs up, and applause on its premiere Gilpin/ Boulder debut service call. TFPD has been built on the shoulders of men and woman who serve their community with their time, talent, and abilities. In the United States fire departments are approximately 75% volunteer. “Nothing is stronger than the heart of a volunteer!” Consider becoming a member of the TFPD team of 70 dedicated volunteers. If you are interested in volunteer service with TFPD, then come train with us, come serve with us.

Contact Lt. Caleb Kropf at 303-582-5768 for an appointment. Parade One certainly will welcome you! More information is available at www. timberlinefire.com.

Parade One is in service, waiting for the next tone call-out for action. Great granddad will keep a watchful eye!

END_OF_DOCUMENT_TOKEN_TO_BE_REPLACED

Benefitting the county, schools, and much more By Don Ireland   This year marks the 30th anniversary of casinos opening in the former little mining towns of Black Hawk, Central City and Cripple Creek, Colorado. In those early years, smoking was allowed inside ... END_OF_DOCUMENT_TOKEN_TO_BE_REPLACED