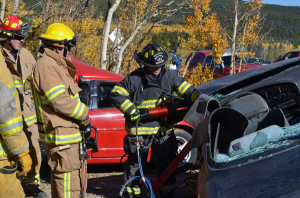 Unless you wanted your SUV turned into a convertible, last week was not the time to park at Timberline Fire Protection District’s Station 3.

Timberline (TFPD) hosted a two-day vehicle extrication training event on Tuesday, September 23 and Saturday, September 27 at the station on Highway 46. The all-day Saturday session was open to the public. Vehicle extrication is the process of removing a vehicle from around a person who has been involved in an accident, when conventional ways of getting the person out are impossible or inadvisable.

Local first responders received hands-on training in techniques to perform several kinds of automobile extrications. Wrecked cars were provided for the training; members of the public driving past the station last week likely noticed the smashed-up vehicles sitting in the parking lot.

TFPD Board President Jim Crawford served as safety officer at the event. He noted that it was the first time for a vehicle extrication exercise in Gilpin County and was pleased at the large attendance.

Five groups participated in five different stations and evolutions, or scenarios. The wrecked autos were in configurations simulating accidents – one car on top of another, a car lying on its side, a car upside down. The trainees practiced stabilizing the vehicles with struts and cutting away parts so that they could learn, in case of an actual similar accident, how to free victims trapped inside.

Each of the scenarios ran for about an hour, followed by a break. Then each group went on to the next station. A couple of the groups were composed mostly of students working within their own departments; for example, Central City responders all working together. Some of the groups were a mixture of the various agencies. There was value, Crawford said, in personnel from each agency learning to work together first, before working with other agencies.

More than 20 wrecked vehicles were used for the training, and TFPD paid to have them transported to the station. Black Hawk towing was the only local company to provide the scrapped cars; the rest came from a couple of salvage yards in the metro area. Following the extrication, the cars were to be returned to the salvage yards for grinding up and recycling.

“They’ll get all their parts back,” Crawford said, “and they don’t care if they’re still attached.”

He added that Tuesday evening’s session was half class-time instruction and half demonstration on using the tools to cut up a car.

The various agencies also brought their own extrication tools and stabilization struts for everyone to practice with. Several of the organizations had tools that were similar to one another’s, and Crawford stated that it was helpful to practice with each other’s equipment in the event that more than one agency would be responding on the same accident.

Tools included cutters, spreaders, and rams (tools that push metal out in a straight line), as well as struts that helped keep the vehicles stable during the extrications. Crawford said some of the struts were purchased from a DOLA (Department of Local Affairs) safety grant.

Although there are auto accidents in Gilpin County, most don’t require an extrication. Crawford acknowledged that in the majority of accidents, the people have already gotten themselves out of their vehicles in some fashion by the time the responders arrive. However, about once a year there is a need for an extrication; as Crawford said, “That’s not the time to be wondering how to do it.”

The parking lot at the Gilpin County Fairgrounds, for which TFPD had paid a $1,000 deposit, was to have been the original location of Saturday’s training exercise. However, after cleaning up the mess from Tuesday’s cutting demonstration at Station 3, it was decided to change Saturday’s location to the station.

Crawford said, “Clean-up of the mess would have been an issue. We didn’t want to make a mess on someone else’s property, so we thought it would just be easier to do it at Station 3.” He noted that TFPD could bring in a backhoe and scrape off the debris.

Crawford was enthusiastic about the number of cars and the large turnout.

“The opportunity is decreasing to obtain cars having only scrap value. It’s also difficult to get everyone together for one of these cut-a-thons.”

High Country Fire Auxiliary helped by providing breakfast and lunch for the event.

Chris Jennings, former fire chief for TFPD, resigned last month after being placed on administrative leave. Assistant Chief Chris Schimanskey, who is now the acting Chief, was unable to be present at Saturday morning’s portion of the training due to the schedule of his regular full-time job.

Crawford said, “We are still resolving matters [about the leave and resignation of Jennings]. It was a personnel matter, so I can’t comment on it, but if things change, it will be made public if appropriate.” He said the District is in regular contact with its attorneys to make sure that the situation is handled correctly.

Crawford spoke briefly about Jennings. “He did a lot for the department, and I don’t regret the decision to hire him,” he said. He cited Jennings’ grant writings as being instrumental in the District’s receiving a FEMA firefighters’ grant of $155,000 for self-contained breathing apparatus (TFPD had a 5 percent match) and a state grant in a comparable amount for an air trailer. The air packs were delivered recently, and the trailer is to be funded soon.

TFPD will begin conducting a nationwide search for a new chief, placing ads in national fire service publications and online systems such as Monster.com. They will also search locally via word of mouth.

Schimanskey and Crawford, as well as some others from the District, are working together to make sure that the duties of fire chief are covered.

When asked if the issue with Jennings concerned misuse of taxpayer monies, Crawford declined comment.

“We weren’t expecting this,” Crawford responded. “But we’re picking up the pieces and going forward.” He stated that it would take about six months to find and hire a new chief.

END_OF_DOCUMENT_TOKEN_TO_BE_REPLACED

Benefitting the county, schools, and much more By Don Ireland   This year marks the 30th anniversary of casinos opening in the former little mining towns of Black Hawk, Central City and Cripple Creek, Colorado. In those early years, smoking was allowed inside ... END_OF_DOCUMENT_TOKEN_TO_BE_REPLACED

Benefitting the county, schools, and much more By Don Ireland   This year marks the 30th anniversary of casinos opening in the former little mining towns of Black Hawk, Central City and Cripple Creek, Colorado. In those early years, smoking was allowed inside ... END_OF_DOCUMENT_TOKEN_TO_BE_REPLACED