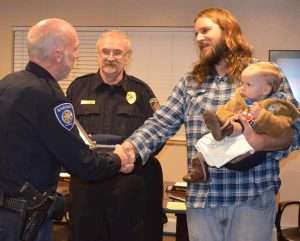 Ryan Erickson received a lifesaving award from TFPD and from the Gilpin County Sheriff. Erickson saved the life of neighbor Leland Baker on November 30 when Baker’s rental home at 412 Chalet Drive burned. Erickson, who lives across the street, heard the explosion and saw smoke and flames coming from the home. He saw Baker hanging out of a window and pulled him to safety with the help of a passerby.

Chief Schimanskey praised Erickson for his actions. “He heroically, and without regard for his own safety, saved Baker’s life and waited with him until medical help arrived. Without his help, the resident would have perished,” Schimanskey said.

Erickson commented, “I’m glad to hear Lee’s recovering. It was nerve-wracking to be in that situation.”

Baker was burned on his hands in the incident and was taken by Gilpin Ambulance to St. Anthony Hospital. He is receiving skin grafts.

Josh Kellett received the Firefighter 1 award, the highest rank through TFPD. Kellett put in over 200 hours to receive that rank and was awarded a firefighter’s black hat signifying his achievement. He also received the traditional “challenge coin,” which bears the organization’s insignia and acknowledges the special achievement of Firefighter 1.

Henrickson presented the financial statements for December 2014. Total in checking and savings was $573,389. Total expenses were $55,043. The credit card statement showed a total due of $4,123. Total expenses for 2014 were at 84 percent of budget, with total income at 105 percent.

Wenzel brought up a concern over the purchase of bunker gear by Schimanskey that he said had not received Board authorization. He recommended reviewing their project and purchase policy to help give the Chief direction in purchasing, saying it would cover the Chief’s authority that allows routine expenses to be paid without Board approval.

Wenzel contended, “Because of what happened at Station 8 (past legal problems with a construction contractor), an audit found things that didn’t look good.” Crawford said the Station 8 situation had been a “fiasco” and didn’t want another similar situation.

The Chief’s purchasing authority is solely through the general fund, with a limit of $5,000. Capital fund expenses have to be over $5,000, and those must have Board approval before the Chief can make a purchase.

Schimanskey said he was of the impression that he had Board approval for purchasing the items in question.

Crawford objected that no bids were put out. He wanted three bids to show due diligence to audit recommendations and said the Board would not be financially responsible if they didn’t put such purchases out to bid and maintain a paper trail.

Wenzel thought the policy applied to construction projects vs. purchasing and reporting, and Crawford responded, “If it doesn’t apply to everything, we have a major problem with financial controls.” He emphasized receiving bids from different vendors and choosing the best value, not necessarily the lowest price.

Schimanskey had found a vendor and purchased four sets of bunker gear. TFPD has plans to get 19 total sets this year and 15 sets in each of the next three years.

Wenzel moved to have the Chief purchase 15 sets with the vendor he’d selected. Discussing the motion, Henrickson suggested that clarification was needed for future purchases, and the others agreed. Ondr noted, “We have the price but not the bids.” Accordingly, Wenzel withdrew his motion until next month’s meeting.

An all-hands meeting was held the evening of January 13. Over 20 new firefighter ID cards were issued.

A structure fire on Rangeview had posed an extreme challenge due to high winds. The fire began when a chimney flue caught fire. Josh Kellett was first on the scene and “did a fantastic job,” Schimanskey asserted.

Five people completed training at the Wildland Academy in Colorado Springs. The chief thanked Emmit Hoyl, TFPD’s wildland officer, for his hard work on that.

The recruitment and retention committee met to discuss advancement for recruits.

Bids have not yet gone out to vendors on the NCR air and light trailer grant; delivery of the trailer is likely to be mid-summer.

A grant has been submitted to the Alan Green Foundation.

Emmit Hoyl is working on a grant submission for wildland gear for boots for the people who passed the Wildland Academy program.

Trucks are 100 percent completed and inventoried.

Signs are up at Station 8 on Smith Hill Road.

Cleanup has been completed at Station 2 on Pine Drive.

Knox boxes are being mounted in the trucks instead of at the stations. These are small safes used for holding building keys.

The Business Manager’s hours had been increased from part time to full time on a temporary basis when former Chief Chris Jennings resigned. The Board asked Hinderman to continue working 40 hours per week indefinitely; her salary is budgeted at full time for the year, with a small increase.

TFPD has received applications for a full-time firefighter position. These will be accepted until January 31. A committee will have until February 7 to review all applications, and interviews will be scheduled for February 19-20. The Board hopes to announce the selection on March 2.

The Board discussed the meals policy, which now allows a flat rate of $61 per day. It was generally agreed that fixed amounts should be allowed for each meal, when someone is entitled to purchase a meal locally. When out of town, the Federal rates for that locale could be utilized.

The Gilpin County Commissioners approved TFPD’s contract on Station 9 in Rollinsville. A temporary lease had been set to expire on December 31; the current lease will run through the end of 2015. A meeting with TFPD and the Commissioners is planned for January 27 to discuss ways that TFPD and the County can share use of the building.

Additionally, Lynn and Mark Slinger, who own Tesco Plastic Manufacturing in Rollinsville, have spoken with TFPD about their intention to construct a building adjacent to Station 9, which they would rent to TFPD. That would be in lieu of using the present building. Discussions with the Slingers are preliminary.

Long-range plans were discussed regarding Station 1 on Highway 72 in Pinecliffe. The old building was originally the Pinecliffe volunteer station when the department was High Country. Among several issues is the problem that fire trucks are too wide for the bay doors, and side mirrors get knocked off when trucks are driven into the station. Three options for solving the problems are: 1) scrapping the facility and building a new one on or near the property; 2) modifying the existing building with wider doors; 3) tearing down some walls and remodeling with custom-made metal walls.

It was noted that residents living on a corner adjacent to the station are interested in selling their property to TFPD at a favorable rate.

Crawford said, “We’re a keyhole in the middle of their property. The corner would give us flexibility ten years down the road. We may have an option to expand the footprint.” It was suggested that negotiations be made with the present owners. He felt, however, that Boulder County regulations might make the cost prohibitive.

Another consideration is a log cabin on the property, for which the residents had made an application for a historical designation.

The Board decided to ask Emmit Hoyl to draw up plans and write a request for proposal.

A remodel is beginning next week at Station 7, at 14908 Highway 119, to upgrade the training room and to make the upstairs into sleeping quarters. The Board approved a motion to budget up to $7,500 for the renovation, to include floors, bathroom, and electricity. Different contractors will do the various jobs, with volunteers doing painting. Three bids have been obtained to do the floor, and one bid of $20 per hour was received to do the bathroom.

Ondr mentioned the new air packs at Station 3, stating that they couldn’t be put in service yet because the fill station could not do its job. He said, “It will cost $9,000 for a new fill station,” adding that Black Hawk’s system might be utilized if TFPD could pay $500 to help Black Hawk upgrade its system. He offered to pursue the matter.

Ondr had obtained a bid for four large-diameter intake valves for the Rosenbauer trucks, at $2,055 per valve if installed at the bidding facility. A $150 trip fee would be charged if installed at TFPD’s facility. TFPD would be reimbursed for one valve, and the total cost would not exceed $9,500.

The Board approved the Notice of Public Meetings and accompanying Resolution. All meetings will be held at Station 3, except for three summer meetings at other stations (June 15 at Station 4; July 13 at Station 9; August 11 at Station 8). The meeting schedule and station locations are posted on TFPD’s website, timberlinefire.com.

The Mission & Vision Statement, Code of Ethics, and Core Values document was adopted. “The mission … is to utilize resources efficiently to provide emergency services for the benefit of citizens … while maintaining the safety and security of our members.”

“The vision … [is] to be a professional fire department that sets the standard for service, safety, and community relationships based upon leadership dedicated to organizational ethics and values.”

There was to have been an executive session addressing the performance of Chief Schimanskey; however, he was willing to have a public discussion.

Schimanskey said he was honored to do the job and he loved it. He had hoped to quit his present full-time job and become TFPD’s full-time chief. However, he believed there were others who were better qualified than he.

He added that he was burning out, working 12-hour shifts at his regular job and helping TFPD for 12-15 hours weekly.

“This job needs someone to work at least 25 hours a week,” he contended, estimating that he could keep up the work load for maybe another six months, but issuing no ultimatum. He expressed gratitude for “an excellent staff to work with and a good bunch of officers.”

Jerry Johnson, a TFPD firefighter who attended the meeting, recommended, “Keep in mind that the former chief had impressive qualifications, but I now see smiles since Chris Schimanskey has taken over.”