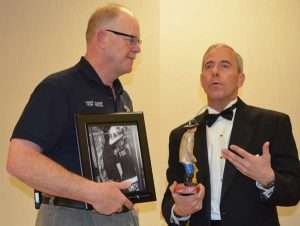 Annual ceremony a time for recognition, reflection, and fun

It was a time not only to recognize excellence, but also to reflect on the past year’s accomplishments as a District and to have many lighthearted moments. Before the hiring of current Fire Chief Glenn Levy a year ago, TFPD had struggled with a number of challenges. Levy has guided the volunteers in working together to overcome the District’s troubles. Over the past year, Levy and the members of TFPD developed mutual high regard and special relationships, and the improvement in morale was noticeable.

Levy then spoke of the priority to foster good relationships between TFPD and other local first responders. He thanked attendees Central City Fire Chief Gary Allen and his wife Susie, Black Hawk Fire Chief Don Taylor and his wife Donna, and Gilpin Ambulance Authority Chief Brandon Daruna and his wife Melissa for all of their support and efforts. He also noted that TFPD is working closely with the Gilpin Sheriff’s Office and other surrounding agencies.

Levy called the guests’ attention to a vacant chair drawn up to a table set with firefighter’s gear and a framed print of a firefighter’s boots. He explained that the empty seat was in honor of those unable to attend that evening, or those who had died, retired, or moved away. The various items on the table reminded everyone of the selfless service, passion, and commitment of the firefighter.

Levy recognized many individuals for their contributions. As he acknowledged the volunteers’ families for their crucial support, each firefighter presented one or more family members with a rose in thanks. HCA volunteers also received roses in gratitude for their assistance, especially in providing home-cooked meals weekly for the EMT class. Previous TFPD board members and retired firefighters were each remembered with a warm winter cap.

Board members also proudly handed out new uniforms to each firefighter, which were provided with a $5,000 grant from the Meister Foundation.

Board Vice President Wenzel reviewed 2015. He said, “I’ve seen a lot of changes in the last five years. It was challenging at the beginning, but we managed to get through it and make significant changes. We’re in a very good place now.”

TFPD’s goal, Wenzel advised, was to build a premier rural mountain fire district, and he asserted that the department had come a long way toward that goal. “Relations with sister agencies in the community have improved, six trucks were purchased in the past several months and another one is on the way, there is a great cadre of volunteers, our first EMT training is in progress, a significant number of firefighters have been trained for Firefighter One positions, and Glenn Levy was brought to the county.”

Wenzel had much praise for the district’s new chief. He said Levy “fell into our lap” at a good time and lauded him for having the vision, drive, and commitment to make the organization better.

Wenzel spoke about this month’s issue of the Special District Association’s newsletter, which featured Timberline. The article reported on TFPD’s more than 50 dedicated volunteers serving 4,500 people in Gilpin and Boulder counties. Chief Levy was quoted as wanting the District to be “the City on the Hill,” providing outstanding care to people who need to get to the hospital, since transport time is so long. The goal is to be the kind of District that others aspire to be.

One of the assistant chiefs, Chris Schimansky, who served as acting chief prior to Levy being hired, provided many highlights of 2015, among which were: 544 total responses, several station remodels, District participation in  a number of county events, the first in-house apparatus driver training, several open houses, participation in the Black Hawk firefighters’ training academy field day, establishment of Timberline University (online volunteer training), approval of a pension raise for all retirees, and response time reduced to less than ten minutes per call. Four assistant chiefs were appointed: Schimansky, Paul Ondr, Galen Koepke, and Chip Smith.

Schimansky especially noted the budget issue. “We’ve always had a deficit. In 2014, the deficit was almost $80,000. When Chief Levy arrived, the deficit was $45,000. Our goal was a zero deficit. The first month the chief was here, he submitted a zero deficit budget. At the end of 2015, we had a surplus of over $80,000.” Business Manager Jennifer Hinderman and Board Treasurer Ondr were instrumental in helping TFPD achieve this mark, he said.

On a lighter note, the Chief and the Board Vice President, both resplendent in tuxes, rose to the occasion with an impromptu rendition of “Happy Birthday” to please an attendee who suggested they looked like Dean Martin and Frank Sinatra.

Following the crooners, Timberline’s own Chip Ice and the Bladder Packs provided live entertainment. Led by Chip Smith, the country-rap group had the audience rolling in laughter with Smith’s original words and groupies bopping to the rhythm. At Smith’s “peace out” finish, CI and the BP received a well-deserved Standing O.

Levy was nearly speechless after that, but recovered sufficiently to present the awards. Growing serious, he explained that each award was selected with the individual honoree in mind. Levy had chosen rewards for them that he himself had been given.

“I have had these awards for years, and they are very important to me. I am regifting them with pride,” he stated. In addition, each winner received a framed photo of themselves in their Timberline role.

Levy first recognized Dennis Whalen, who was retiring after 11 years, noting Whalen’s amazing 14.2 percent of total responses for the District.

Chris Samuelson received the Rookie of the Year award, a statue of a firefighter in readiness, which Levy said exemplified Samuelson’s service.

Charles “Chip” Smith was awarded Firefighter of the Year. His special memento was a statue that Levy had received as a gift from his own father for making battalion chief.

Officer of the Year was Eric Douglas, whom Levy praised as a real leader of the organization.

Station of the Year title was won by Station 8, located on Smith Hill Road.

The next accolade was the Garden Award, which went to the person who was really starting to grow and develop. Todd Barron received a set of boots at the ready.

Several firefighters received a Major Responder Award. Each man responded to more than 70 calls, and Chip Smith had the most responses at 211. These volunteers were awarded with a TFPD t-shirt.

The prizes culminated with the Chief’s Award. “This year the award is not given to a firefighter,” Levy announced. “It is given to the person who most exemplifies public service and our values, Business Manager Jennifer Hinderman. She is the cornerstone of Timberline!”

Several tongue-in-cheek awards were also given to good-humored individuals on the basis of various amusing events that took place over the past year.

David Canfield of Station 2 wrapped up the presentations with a giant card to Glenn Levy and his wife Christine, signed by the many volunteers of TFPD in appreciation for the couple’s leadership.

In closing, HCA President Diane Rittenhouse expressed gratitude on behalf of the Auxiliary. “I can’t begin to tell you how happy we are for the refreshing and wonderful relationship we now have with Timberline,” she stated. “We are proud to help with the EMT class, and we love all you guys and gals!”

END_OF_DOCUMENT_TOKEN_TO_BE_REPLACED

Where the dead get to tell their story By Jaclyn Schrock On Saturday, August 21, the Gilpin Historical Society held their annual Cemetery Crawl. Tickets allowed the shuttle of hundreds of guests from the Teller House parking lot to the Cemetery. Depending on v... END_OF_DOCUMENT_TOKEN_TO_BE_REPLACED