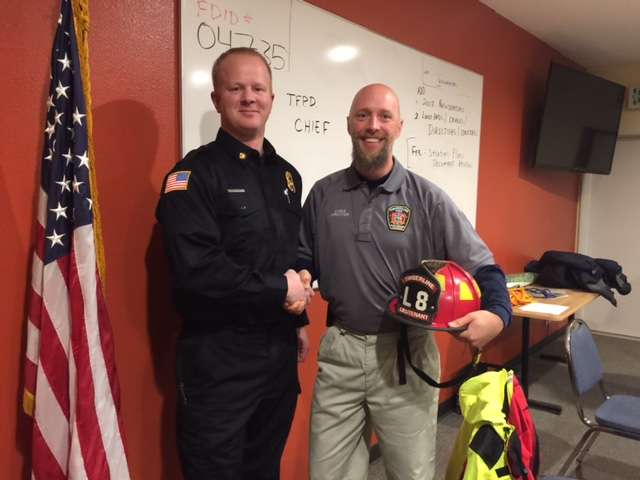 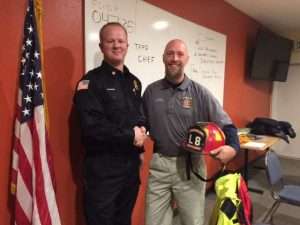 Timberline Board of Directors called to order their regularly scheduled meeting January 23, 2017 at 7:00 p.m. at Timberline Station 7, 14908 Colorado Highway 119. The meeting was attended Board President Chip Smith, Board Vice-Chair Chris Samuelson, Secretary Cheryl Taylor, and Treasurer Rik Henrikson. The Member-at Large position was vacated as a result of the resent personnel shift. Also in acting Chief Paul Ondr, and Administrator Jennifer Hinderman,

President Smith led the recitation of the Pledge of Allegiance and then a moment of silence for fallen Firefighters, EMS, Military Service members, and Police Officers.

Smith added to agenda, 2018 Residential Assessment issues and what he called “Loose-ends, Cracks, Directives, and Concerns”

Timberline Board of Directors (BOD) then approved the Special Meeting Minutes from December 27, 2016 with no corrections

Two candidates for the vacant Member-at Large position submitted their letters of interest. Richard Wenzel, and Dale Sternlicht were introduced and the discussion ensued to determine a suitable temporary replacement.

Wenzel, a longtime member of the Board of Directors, has extensive experience that extends back to the Colorado Sierra/ High Country Departments merger. He has experienced the growing pains of a fledgling department and several Chief appointments.

Both candidates are longtime residences of Gilpin County and both have extensive EMS experience.

After much debate and a vote, Dale Sternlicht was appointed and sworn in as the new Member-at Large.

The Timberline Board approved the funding for a replacement generator for Station 7. The current generator has several problems and has failed to start on numerous occasions during power outages. Total cost of the new generator is around $7,000. The generator is $5,500, and the balance will cover additional installation and wiring updates.

Chief Ondr presented a proposal to purchase an additional plow/ response truck for Timberline. Currently, there is only one plow truck in the district and when it snows it is a time-consuming task to clear all the fire stations given the size of the district. An additional truck would also provide a back-up when the main truck is out of service. Timberline BOD approved $45,000 for a 2017 Dodge 2500 or 3500 with a plow and a shell box cover to protect the on board response gear. This will improve efficiency, will keep plows available at both ends of the district, and provide an additional response unit for medical emergencies and incident size-up. The funds for the new unit will come from the sale of fire truck Tender 52.

Timberline BOD approved the continuation of the SAFER Grant application. The Staffing for Adequate Fire and Emergency Response (SAFER) Grants were created to provide funding directly to fire departments and volunteer firefighter interest organizations to help them increase or maintain the number of trained, “front line” firefighters available in their communities and is sponsored by F.E.M.A. The grant money is earmarked to create a new Recruitment and Retention Officer position for Timberline. Chief Ondr and Lt. Jim Crawford are being tasked to complete and submit the application.

2016 was a record-breaking year according to Chief Ondr. In all, Timberline responded to 724 calls, with most being medical assists.

All apparatus and equipment is operating normally with a few minor glitches here and there.

Facilities repairs are up-to date, there again, with a few minor items that need attention.

All in all, Ondr expressed his satisfaction with current condition and status of the entire organization.

With the exception of a few last minute donations and expenses that have to be added, Treasurer Henrikson presented the draft copy of the final numbers for 2016. The District is healthy with the December 31, 2016 Balance Sheet reflecting an assets totaling more than $4.6 million. Fiscal responsibility spearheaded by former Chief Levy paid off in the form of a carry-over surplus to be added to the 2017 budget. A complete report is available on http://www.timberlinefire.com/SiteAssets/board-of-directors .

Due to the large increase in property values and double digit growth in Colorado, all tax dependent municipalities, including Timberline, will soon be affected by the Gallagher Amendment of TABOR or Tax Payers Bill of Rights. What’s that’s you ask? The Gallagher Amendment, passed in 1982, was designed to maintain a constant ratio between the property tax revenue that comes from residential property and from business property. To simplify a set of complex formulas, the effect of Gallagher was to reduce the assessment rate (the percent of property value that is subject to taxation) whenever statewide total residential property values increased faster than business property values. (Source: greateducation.org). With that, property owner/ taxpayers will see about an 18% decrease in the amount of taxes they pay. That translates into about a $70,000 drop in revenue for Timberline. The BOD is required by their By-Laws to maintain one year of expenses in the General Fund to sustain the department during lean years. To achieve long-range sustainability, President Smith asked the BOD to consider a mill levy increase to be put on the county November Ballot to be implemented starting in the 2018 tax year. This discussion is strictly informational at this point, but it is an issue that we will have to address in the near future to eliminate any long-term fiscal short comings.

With the retirement of Chief Levy, President Smith asked the Board and Staff to identify any loose ends that might be out there. One such item is the inclusion issue of the properties in Timberline. The Board is in favor to continue with the In-District inclusion, but the large and sparsely populated South District inclusion will have to be addressed later.

The discussion to establish the scope and responsibilities of the replacement Chief got underway that included the Board and paid staff of Timberline. The budget for a full-time paid Chief is $125,000-$130,000, including salary and benefits. After much discussion, the group decided to go with a part-time Chief at a reduced cost, with the possibility of a full-time position later. The cost savings will then be available to establish a part-time Firefighter/ Training Coordinator position to assist the Administrator and the Chief with the daunting task of coordinating training, recording and maintaining the numerous certifications held by the firefighters. Posting of these positions will be available soon on the Timberline website at: http://www.timberlinefire.com/