Timberline Fire has a quiet November 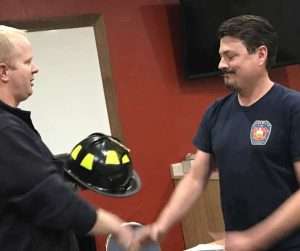 The Monthly Board Meeting and Quarterly Pension Board Meeting on December 12, 2017 had an abundance of positive news. President Chip Smith called the meeting to order promptly at 7 pm at Station #5 in Black Hawk. In attendance were VP Chris Samuelson and Treasurer Carol Tucker along with Chief Paul Ondr and Jennifer Hinderman. 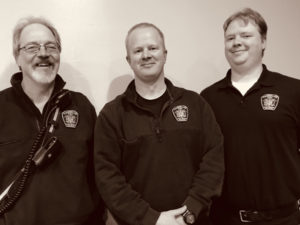 The meeting started with congratulating firefighter Kris Chupka, who was awarded his “Black Helmet” for completing State Fire Fighter 1, HAZMAT operations, Wildland, and EMT Basic certifications. The Chief’s update stated that Timberline responded to 47 calls in November which was the fewest calls for a month in years. He discussed the purchase of two new Dodge Durango trucks which have been ordered. After researching several options, the district felt it was more cost effective to purchase these vehicles new due to special government pricing and warranties. A second UTV was purchased and is at the fabricator for a roof rack. A small mounted “Skid” unit will be ordered after the first of the year. The UTV and Skid unit are being paid for by PILT funds. These are funds the county receives to provide services on federal lands. Both of these pieces of equipment will be stationed at Timberline’s Station 10 and will primarily be used to respond to the public recreation areas in the southwest area of the county.

Timberline is happy to announce Lieutenant Caleb Kropf is their new Recruitment and Retention Program manager. The salary and benefits are fully funded for four years by a grant from FEMA. Timberline was awarded this grant several months ago. The grant is called SAFER (Staff Adequate for Fire and Emergency Responders).

Kropf said this is his dream job because he will be able to advocate full-time for the volunteers that dedicate their lives to being a firefighter. Chris knows what it means to be a volunteer. He has volunteered for the past eight years while still working full-time job in the software engineering and technology field. Chris is a third- generation firefighter. He is a long time resident of Gilpin County and proud to have graduated from Gilpin HS in 1998. Caleb was Lieutenant at Stations 5, 6, and 7 at various times.

The Pension Board of Trustees first order of business was to approve the retirement of John Carter. This passed unanimously after Carter was recognized for his outstanding contributions. However he did need to resign as a Trustee from the Pension Board because of possible conflict of interest. It was obvious how much respect the Board and the whole department has for this man. Their next order of business was to share the allocation report. They are pleased that the pension funds are strong. And in the words of Chip Smith, “While PERA is under fire, we are proud to say ours in on solid ground. Thanks to the forethought and good planning of prior Boards and Trustees, our financials look good.” The minutes and allocation report was passed.

The Budget for 2018 was discussed and approved. The Capital Funds for 2017 was amended slightly. Readers can view the budget in detail on their website which is currently being updated, but according to Jennifer Hinderman, Timberline’s Business Manager, the improved website will be up and running soon.

Chief Ondr thanked the Board for being so supporting as they have gone through many changes over the past year. He said, “Things are really working smoothly now. Everything is back on track and staff morale is high.”  Chief Paul went on to say that instead of two and a half employees one year ago, the district is now supported by six full-time employees and one part-time employee. Through grants, IGA’s, and partnerships three of those full-times positions are at no cost to the tax payers. Chief was enthusiastic that these additional employees help serve the community better. Smith concurred and said the Staff really “works well together.” It certainly seemed like a cohesive group of dedicated people.

Smith reminded everyone of the visit from Santa and the Elf’s from 1-4 pm at the Last Shot Restaurant on Sunday, December 17. He said it will be a free community Christmas party and buffet provided by restaurant owners, Roy and Barb Stewart. The TFPD meeting was adjourned at 7:59 pm.

END_OF_DOCUMENT_TOKEN_TO_BE_REPLACED

Where the dead get to tell their story By Jaclyn Schrock On Saturday, August 21, the Gilpin Historical Society held their annual Cemetery Crawl. Tickets allowed the shuttle of hundreds of guests from the Teller House parking lot to the Cemetery. Depending on v... END_OF_DOCUMENT_TOKEN_TO_BE_REPLACED

Benefitting the county, schools, and much more By Don Ireland   This year marks the 30th anniversary of casinos opening in the former little mining towns of Black Hawk, Central City and Cripple Creek, Colorado. In those early years, smoking was allowed inside ... END_OF_DOCUMENT_TOKEN_TO_BE_REPLACED