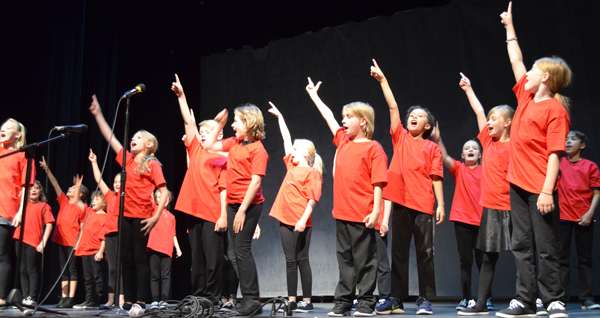 “Overture, curtain, lights, this is it, the night of nights!”

The Gilpin Elementary Theatre Department proudly raised the curtain on “A Taste of Broadway” on Friday evening, September 14, in the Gilpin School auditorium. The event was a professional quality fundraiser for the elementary performing arts and included hors d’oeuvres, a silent auction, and a Broadway cabaret followed by dessert.

The group raised over $2,100 from ticket sales and the silent auction.

The group had been considering various ideas to raise funds for the department and decided to “think out of the box” of the typical candy sales and the like. They decided that nothing would be more appropriate than a slam-bang show by the kids, the talented theatre team, and a cast of professional performers.

The tribute to Broadway musicals featured special guest appearances by award-winning Broadway artist Josh Franklin, national touring performing artist John T. Wolfe, Adam Hunt, Angela Hunt, Annie Wolfe, and Deborah Wolfe. Angela Hunt is a friend of Gilpin’s acting director Jacquelyn O’Brien, and the other performers are friends or relatives of Hunt’s. Dysart expressed appreciation for their willingness to fly out from New York and other parts of the globe to take part in the Gilpin production.

“We practiced individually on our own,” Dysart related in a post-show interview. “The folks flew in on Tuesday, we had our first rehearsal on Wednesday, and our other rehearsal today (Friday)!”

The children began their practices with the start of the school year in mid-August. 35 kids participate in the theatre department, including ten in kindergarten through second grade and 25 in third through fifth grade.

Dysart described the development of the theatre department. “We started with dance and added acting and voice. We are excited to grow the program and to follow in the footsteps of the secondary theatre program. It gives them the skills of speaking and being on the stage and gives them something they can put on their resume.”

She noted the encouragement and example that the visiting pros could give to the Gilpin students. “Josh Franklin was a Colorado Springs native. If he can make it on Broadway, then kids from small communities like Gilpin can do it, too.”

Crowds began piling into the atrium at 6:00 p.m. to bid on dozens of high-quality items. Students circulated among the guests, serving a host of tempting snacks on silver trays. They were dressed in their red t-shirt dance costumes and buzzed with pre-performance excitement.

Fifth-grader Juliet Ragan was looking forward to performing “N.Y.C.” from the musical “Annie’s Kids,” and admitted to being nervous.

Fellow performer Kaylee Harmsen exulted, “I’m in the opening! I like dancing, because you get to dance in different ways!”

The many high-quality items being offered at the auction were donated by Gilpin school families and event sponsors and included several Colorado-themed articles, whimsical Pac Man earrings, Eagle wear offered by the Gilpin Booster Club, and much more. Services included an hour of free rides on the Carousel of Happiness in Nederland, a $50 gift card to Ace Hardware, a bronze membership at the Gilpin Community Center, and a voucher for Tae Kwon Do lessons. Gift baskets ranged from spa items to wine to DVDs of Broadway musicals. Folks bid on a “Taste of Broadway” signed poster, gift certificates to Roy’s Last Shot, and a night’s stay at the Magnolia Hotel in Denver. Montessori teacher Monica Ruhl offered her priceless “lunch and a hike with Ms. Monica” student packages. Children engaged in their own mini-bidding war on a teddy bear.

The two-hour variety show was a tribute to Broadway musicals. Zeilbeck and O’Brien welcomed the audience and informed them of a grant received by the Gilpin County Education Foundation, which will be used to improve theatre equipment.

Curt Halsted and Misty Ebers emceed, introducing each number with some background from its related musical. Act I showcased the students of the Elementary Theatre Players in the first song, “Let’s Go to the Movies,” from Annie. They performed energetically and drew a big round of applause.

Other songs included “I Love Piano” from the 2004 version of White Christmas (Angela Hunt and John Wolfe on vocals), “Singing in the Rain” from Singing in the Rain (LA Dysart, dancer), “Poor Unfortunate Souls” from The Little Mermaid (Annie Wolfe and Jacquelyn O’Brien, vocals), and “Infinite Joy” from Elegies (Josh Franklin, vocals). Elegies is a musical response to the September 11 terrorist attacks, Franklin explained.

Act II opened with “N.Y.C.” from Annie Kids, again featuring the Elementary Theatre Players, followed by many other favorites.

Student Archer O’Brien sang “I Know Things Now” in the role of Little Red Riding Hood from Into the Woods. Franklin and Wolfe performed the humorous “Agony” from Into the Woods, appearing as Cinderella’s prince and Rapunzel’s prince. Crystal Zeilbeck belted out the “Diva’s Lament” from Spamalot.

The grand finale was a Broadway medley arranged by O’Brien and Zeilbeck and included tunes from musicals as diverse as Jekyll and Hyde, Annie Get Your Gun, Phantom of the Opera, Guys and Dolls, Cats, and A Chorus Line. The entire cast brought down the house with “On Broadway” from Smokey Joe’s Café.

The Gilpin Elementary Theatre Players are learning that there’s no business like show business. They’ve been exposed to the best in Broadway music, heard it performed by professionals, sung and danced on the stage under the hot lights, and thrilled to the heady sound of applause.

“Oh, what heights they’ll hit! On with the show, this is it!”

Don’t miss “Annie Kids,” a musical based on Little Orphan Annie, which the elementary theatre department will perform on Friday, November 17 and Saturday, November 18, at 7:00 p.m. in the school auditorium.

END_OF_DOCUMENT_TOKEN_TO_BE_REPLACED

Benefitting the county, schools, and much more By Don Ireland   This year marks the 30th anniversary of casinos opening in the former little mining towns of Black Hawk, Central City and Cripple Creek, Colorado. In those early years, smoking was allowed inside ... END_OF_DOCUMENT_TOKEN_TO_BE_REPLACED