There’s a new “Enforcer” in town 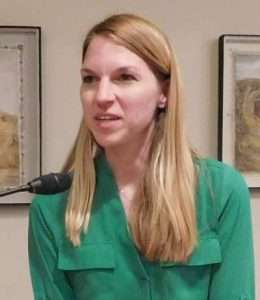 Mayor Fey called the regular council meeting to order at 6:30 p.m. on June 4, and the Council immediately went into executive session regarding a potential donation of real property to the City.

Mayor Fey led the Pledge of Allegiance and then asked for any amendments or additions to the evening’s agenda. Mayor Fey added one item to the beginning of the agenda to recognize a new employee.

Mayor Fey then asked Council for a motion to excuse the absence of Alderwoman Johnson due to a medical issue. Alderman Hidahl asked why the need for a motion. Manager Miera reported that Alderwoman Johnson did not request an excused absence herself, and then explained that Council members are allowed a limited number of unexcused absences without consequences per Rule and this motion would prevent this absence from being counted.

Alderwoman Laratta moved to approve an excused absence for Alderwoman Johnson and was seconded by Alderman Hidahl. The motion passed unanimously.

The Mayor called for a motion to approve the consent agenda which consisted of the minutes from the May 21 meeting and regular bill lists through May 17. Alderwoman Laratta asked about a $17,000 expense for monthly accounting forms. Acting Director Jack Beard answered that the State is changing the way water rights are accounted for and how data is collected for the State which requires an update to the systems. The City contracts with Deere and Ault to collect the data and report to the State. The switch to the new systems took 96 labor hours, but ongoing costs for data collection will be $2,000 per month.

Alderman Hidahl commented, “I’ve been involved in official minutes for forty years or so and I want to say that the job Reba (Bechtel, City Clerk) does on the minutes is top drawer. They are concise and easy to read.”

Mayor pro Tempore Laratta moved to approve the Consent Agenda and was seconded by Alderman Aiken. The motion passed unanimously.

Council reviewed appointments for three positions to the Main Street Commission. Current board members Mike Keeler and Barbara Thielemann indicated their desire to stay on the board for another term which expires at the end of June 2019. A letter of interest was received from Jeremy Kaiser for a first-time appointment. Barbara Thielemann was in attendance and remarked she is honored and happy to continue to serve.

Mayor Fey commented that Kaiser lives in the County, not in the City. He is passionate about the City, “and I think he has won the last two bed races.” The Mayor recommended Council move forward on all three appointments.

Alderman Aiken moved to approve all three appointments to the Main Street Commission and was seconded by Alderwoman Laratta stating, “I second the emotion.” The motion passed unanimously.

Director Rears introduced Resolution 19-13 which would support the Great Outdoors Colorado Grant Application for the Central City Trails Masterplan. The City has budgeted $25,000 for trails.

Mayor Fey clarified that moving forward on the resolution is contingent for the grant to be awarded to the City. Director Rears stated, “Our chances of being awarded the grant are high.”

Alderman Aiken moved to approve Resolution 19-14 and was seconded by Alderwoman Laratta. The Resolution passed unanimously.

A Slurry Without the Fringe on Top

Director Hoover introduced Resolution 19-15 which would award a bid for the Central City 2019 Slurry Seal Project to A-1 Chipseal Company and authorize the City Manager to execute a construction contract. The project was approved by Resolution in a previous meeting. Two bids were received for the project and Hoover recommends A-1. The project adds a protective seal, or slurry, to the existing chipseal on the Parkway. The project will cost no more than $146,625 and the City had budgeted $250,000 for Parkway improvements this year.

Mayor Fey stated he thought they were looking for long-term options to preserve the chip seal before moving forward. Director Hoover responded, “This is my recommendation to preserve the seal we already have, and then I would like to explore other methods for the rest of the Parkway.” Alderman Aiken and Alderwoman Laratta commented that they remember giving Hoover the go ahead with his recommendation.

Alderman Aiken moved to approve Resolution 19-14 and was seconded by Alderman Hidahl. The Resolution passed unanimously.

Alderman Hidahl then commented that they had budgeted $250,000 for a chipseal project and the City is doing the slurry preservation instead. He suggested the City add a change order to the Spring Street paving project to include Lawrence Street as far up as the remaining budgeted funds would allow. Director Hoover agreed to get some costs together and to see if the Spring Street contractor is willing to do it.

Manager Miera called Council’s attention to a staffing change. Jack Beard has been designated Acting Director for the water department. Jason Nelson has an extended period of leave.

Miera next informed the Council that the City received several requests from Casey Street residents to change operation plans for the Independence Day closures. The City has reviewed the requests and will be making one change moving the closure time from 4 p.m. to 5 p.m.

Alderman Aiken asked about the status of the food assessment plan. Director Rears reported the City is not taking an active role this year, but will be promoting the farmer’s market at a county property (the Community Center).

Alderwoman Laratta commented, “The flower baskets are beautiful; they sure spiced up the city.” She then thanked Director Sam Hoover “for the gigantic rocks you put up on Spruce and Pine; it makes it look like you are not welcome to camp there. We were getting homeless (campers) all over the place.”

Alderman Hidahl commented, “I suspect we do not have a quorum for the June 18 meeting.” He stated his concern that a change order for the Spring Street project may have an urgency to be passed before the project is wrapped up. Manager Miera replied that the next scheduled meeting is July 2 and “I don’t suspect the expected change order will need to be decided by June 18,” but if we need to call for a special meeting we can do that. Council then determined there will not be a quorum for June 18.

Mayor Fey adjourned the regular meeting at 7:58 p.m. The next regular Council Meeting will be Tuesday, July 2, 2019.

END_OF_DOCUMENT_TOKEN_TO_BE_REPLACED

Where the dead get to tell their story By Jaclyn Schrock On Saturday, August 21, the Gilpin Historical Society held their annual Cemetery Crawl. Tickets allowed the shuttle of hundreds of guests from the Teller House parking lot to the Cemetery. Depending on v... END_OF_DOCUMENT_TOKEN_TO_BE_REPLACED

Benefitting the county, schools, and much more By Don Ireland   This year marks the 30th anniversary of casinos opening in the former little mining towns of Black Hawk, Central City and Cripple Creek, Colorado. In those early years, smoking was allowed inside ... END_OF_DOCUMENT_TOKEN_TO_BE_REPLACED