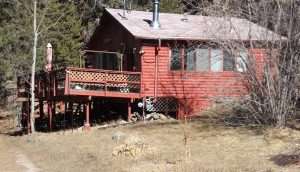 Gilpin County is knee deep in history. With the preservation of our rich mining past, historic towns and buildings, it is easy to imagine what life was like in the not so distant past. One often overlooked piece of our historical puzzle is the Lincoln Hills subdivision located in northern Gilpin County.

According to a 2020 eligibility report by Historic Consultant Deon Wolfenbarger, in the early decades of the twentieth century, Gilpin County attracted developers as well as individuals who looked for scenic, undeveloped land to use as summer cabin resort communities. The growing middle class searched for recreation opportunities away from the cities. Sight-seeing and hiking, as well as hunting and fishing were all activities that attracted folks to the area. Resorts and subdivisions such as Wondervu, Pinecliffe, Miramonte, and Lincoln Hills all capitalized on the construction of the “Moffat Road” railroad that runs through northern Gilpin County. This route enabled folks departing from points east to ride into the foothills west of the Denver. Railroad companies added passenger and seasonal tourist service to the route taking over former mining communities during day trips. Over the next couple of decades, small summer resorts were built near the station stops. Some of the resorts were developed to attract specific groups. The Pinecliffe Resort and Investment Company marketed itself as the pious home of the Colorado Summer Assembly for the Colorado Christian Missionary Society, while Miramonte was a secular but more privileged group of Denver residents. Wondervu was a segregated development geared towards the white working class of Denver. Since African-Americans were denied access to the vast majority of resort communities across the county, Lincoln Hills was developed for black vacationers.

Originally platted in 1922 by the Lincoln Hill Development Company, the land sat at the location of the former Pactolus placer mine site. Denverite co-founders E.C. Regnier and Roger Ewalt sought to build a resort in the Rocky Mountains of Colorado for middle class African Americans which was the only such site west of the Mississippi. Lincoln Hills was re-platted again in 1928 with approximately seventeen hundred rectangular shaped lots small in size for individual cabins with a few larger “estate” parcels.

The Lincoln Hills Sales Company advertised in circulars distributed around the United States in black churches and newspapers using the eye-catching phrase, “The Golden Opportunity! Lincoln Hills in the most beautiful spot in Colorado.” One of the lots was bought in 1924 by William Pitts, an African/ American contract carpenter from Denver. Mr. Pitts wrote in a   letter, “The price asked for the lots seemed so ridiculously low that I feared the site must be inferior to others, but to my great surprise I found it to be the most beautiful mountain sub-division that I had ever visited.” While some lots were purchased for $50 to $100, others sold for as low as $40 per lot. Some were bought outright while others were able to buy on an installment plan, with $5.00 down and a $5.00 monthly payment. Construction on the Pitts cabin was completed in 1928. Mr. Pitts’ grandson, John H. Scott, named the cabin Zephyr View in honor of the California Zephyr passenger train that would pass within sight of the cabin daily. By the end of 1928, eleven hundred lots were sold.

The Great Depression slowed the development of the Lincoln Hills subdivision. “Only eight or nine houses were built in a five-year span,” according to Mr. Scott. Lincoln Hills saw other times when it experienced distinctive periods of growth. For instance, in 1925, Obray Wendall “Winks” Hamlet and his wife Naomi Hamlet began the construction of Wink’s Lodge also known as Winks Panorama. It became the first full-service resort in this growing area. Also completed in 1928, Wink’s Lodge was a three-story building featuring six rooms, a tavern, and  a honeymoon suite. Winks later added the orange cabin, the tin house, and a three-plex cabin. Winks Panorama was listed in the National Register of Historic Places on March, 28 1980.

The Zephyr View property ownership has always remained in the family of William H. Pitts Jr.’s descendants. After the passing of John H. Scott, it was transferred to the current owners, Hon. Gary M. Jackson and Nancelia Regina Belton. No matter the owner, over the years numerous family members and relatives enjoyed the cabin. Family members from as far away as Chicago would come to visit. During the summer, someone would go up nearly every weekend. Paris Scott often had to repair the cabin on the weekends, while the children would roam the mountains or down to the creek. As the cabin did not have running water, the latter was a necessary chore in order to carry water back up the mountain.

The historical significance of the Zephyr View Cabin caught the attention of the Gilpin County Historical Preservation Committee (HPC) when Gary Jackson applied for a permit to repair some foundation issues and to build an addition to the cabin located at 31 Pitts Place. An eligibility report of historical significance was completed in October 2020, and HPC recommended the Landmark Designation on October 23, 2020. The Gilpin Board of County Commissioners unanimously approved designation of the Zephyr Cabin as a Historical Landmark in their regular meeting on November 17, 2020.

Gilpin residents have history all around. The Zephyr View Cabin is the latest one of the many located within Gilpin County. For a list of other historical sites visit www.co.gilpin.co.us/ and select Historical Preservation Commission.

For more information on the history of Lincoln Hills, visit www.historiclincolnhills.com/history.

END_OF_DOCUMENT_TOKEN_TO_BE_REPLACED

Benefitting the county, schools, and much more By Don Ireland   This year marks the 30th anniversary of casinos opening in the former little mining towns of Black Hawk, Central City and Cripple Creek, Colorado. In those early years, smoking was allowed inside ... END_OF_DOCUMENT_TOKEN_TO_BE_REPLACED