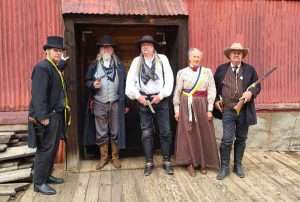 Beginning May 6, 1859 John H. Gregory traveled up North Clear Creek to discover gold in what became Mountain City (of tents) between what we grew to be Black Hawk and Central City.

For a bit more than the last decade various Wild Bunch characters have been walking the streets of Central City on summer Saturday afternoons, sponsored by Gilpin County’s Historical Society. Oh, the stories to be retold of the 59ers that sprouted tent cities all over these mountains.

The decade before this Wild Bunch, many other characters have also offered reminders of the ways things happened in these parts. The visitor’s center on Eureka Street has pictures that show all our colorful mountain history.

From panning for gold to underground mines, Gilpin County fortunes grew. So, when the train first arrived in Black Hawk, December 15, 1873, there was an effort in the state government to make this rich mining community the capital of Colorado.

Instead, in 1876 Denver became capital of the new state of Colorado, and the “richest square mile on earth” in Gilpin County continued to have more and more gold rushers arrive. Most arrived with dreams, courage, intelligence, patience, and muscle to invest and found booming success until the early 1900’s when World War I took men from the mines to be soldiers.

The Wild Bunch retells stories of these great mining times in their street theater shows. These shows tangle and unfold tales of the Glory Hole Mine, Hidee Mine, Coeur d’Alene Mine, and towns of Nevadaville, Russell Gulch and other local camps.

Shows seem to inevitably find some worn-out hard-working miner or cowboy who stumbles along to start some sort of ruckus. It is the way things go in a place full of guys and few women. Often liquored up guys may exaggerate pride and achievements… disputes can trigger anything.

These triggers often interrupt Tom Matthews, reenactor of Ed Harris, (late 1880-90s county undertaker) who attempts to tell fine folks who visit Central City of the live, or rather, now dead ones that passed through these here parts.

Most of the Wild Bunch stories can be found in the archives of the Weekly Register-Call. They were printed to document the events that did occur in these parts. The Weekly Register-Call or newspapers by some part of that lineage name prided themselves in telling the news of the day. It is the oldest weekly printed newspaper in Colorado.

Central City Wild Bunch stories have been known to end with a reenacted gun fight, leaving good guys like the marshal, and bad guys bodies scattered on the ground in front of the Belvedere Theatre. The gal encouraging support of women’s votes has been found left hand-cuffed to the light pole when the dust has settled from the fallen bodies and donations are requested for the Gilpin Historical Society.

Beginning June 2021, the Central City Wild Bunch will once again be reminding us of the ways folks talked and behaved when there were gold and silver mines being dug here.

Wild Bunch shows are Saturdays, noon to 4 pm on the hour in front of the old Belvedere Theatre, next to Anne Oakley’s Market at the corner of Main Street and Nevada Street in Central City.

Come see what has become of Gilpin County folks since the late 1800s, now that we are not mining and dragging gold rocks out of every nook and cranny of the county.

Come to Central City and enjoy the summer, without the dust from digging tunnels, milling gold from rocks, or smoke from the steam engines, and homes.

We have trees on our hillsides again, after most were cut down to hold up the tunnels in the mines, building train tracks, and constructing buildings. We also have fine hotels, restaurants, and casinos with gaming and dining.

END_OF_DOCUMENT_TOKEN_TO_BE_REPLACED

Where the dead get to tell their story By Jaclyn Schrock On Saturday, August 21, the Gilpin Historical Society held their annual Cemetery Crawl. Tickets allowed the shuttle of hundreds of guests from the Teller House parking lot to the Cemetery. Depending on v... END_OF_DOCUMENT_TOKEN_TO_BE_REPLACED