The truth about “Dark Phoenix” 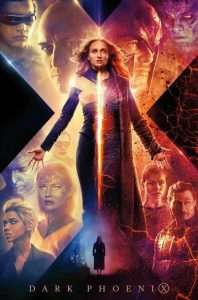 The penultimate X-Men movie, “Dark Phoenix,” just hit theaters marking the end of a dynasty with Fox Studios and Marvel Entertainment. Fox has one more Marvel movie in the works (which may or may not ever be released) now that the deal with Disney Studios is final and Disney holds the rights to the entire X-Men catalogue.The people at Fox knew the handwriting was on the wall when they started this project, and so they put all they had into this film. It is no secret that this strategy seems to have backfired with a 22% rating from critics on rottentomatoes.com. Verified audience scores swing the other direction with 65%. So where does this critic land?

The movie opens in 1975 when Jean Gray’s unique telekinetic mutant abilities manifest at the worst possible moment driving down a highway. Jean, played by Sophie Turner (“Game of Thrones,” “Time Freak”), unintentionally causes her mother, driving the vehicle, to pass out resulting in an accident leaving Jean an alleged orphan. Charles Xavier, played by James McAvoy (“Glass,” “Submergence”), agrees to take her to his school for her protection. The film jumps to 1992 and we see Jean as part of the X-Team blasting off to rescue the distressed crew of the space shuttle Endeavor in Earth’s orbit. During the rescue, Jean is exposed to a harmful solar flare and rendered unconscious. Back on Earth, Raven (aka Mystique), played by Jennifer Lawrence (“Red Sparrow,” “Mother!”), confronts Xavier about his increasing willingness to put mutants in harms way to rescue non-mutants, but he shrugs it off. When Jean recovers, she begins going through a change in which she easily loses control of her powers, but also discovers that Xavier hid the truth of her family’s car accident from her. Jean leaves to find her father, but is disappointed to discover he gave her away to Charles because he could not deal with her being a mutant. Outside the family home, the X-Men catch up to her to bring her home which leads to a confrontation that kills one of the key characters. Jean escapes to New York City and Beast, played by Nicholas Hoult (“Tolkien,” “The Favourite”), tries to team up with Magneto, played by Michael Fassbender (“The Snowman,” “Alien: Covenant”), to find her. The only problem is Magneto now wants to kill her in revenge while Charles wants to bring her back to his school; and so, team Magneto (Beast, Dazzler, played by Halston Sage (“The Last Summer,” “The Orville”), Match, played by Lamar Johnson (“Native Son,” “The Hate U Give”), and one unnamed mutant) gets in a fight with team Xavier (Storm played by Alexandra Shipp (“A Dog’s Way Home,” “Dude”), Cyclops played by Tye Sheridan (“The Mountain,” “Friday’s Child”), Quicksilver played by Evan Peters (“American Animals,” “Pirates of Somalia”), and Nightcrawler played by Kodi Smit-McPhee (“Alpha,” “Slow West”)). Meanwhile, Jean meets an alien woman named Vuk, played by Jessica Chastain (“Woman Walks Ahead,” “Molly’s Game”), who claims they were following the Phoenix Force which is what Jean absorbed in space. Vuk tells Jean she is now the most powerful entity in the Universe and instead of controlling her power, she should embrace it and she could create life instead of destroying it. Now Jean faces a choice; control her power or unleash it; meanwhile, all mutants fighting in New York City were captured and are being transported by train to some unknown destination.

Music. Hans Zimmer composed the score and I loved it! Full of anxiety, joy, tension, and sorrow, the music is a great counterpoint to the movie.

Moments. There are several moments in the film of absolute brilliance. The X-Men stories are uniquely relatable because they are set in the real world and in real history. The mutants themselves are symbolic of an oppressed, victimized race and can be substituted for many real situations: Jews in the holocaust, immigrants, slavery, women in society, homosexuality, etc. When the X-Men movies are great, they are dealing with these realities. “Dark Phoenix” has a few of these moments.

Acting. Kudos to James McAvoy and Michael Fassbender who chew up each scene in glorious drama. McAvoy seems to have snuck in some of his “Split” personalities into Charles Xavier and it works so well to show Charles falling into the temptation of fame and glory. Nicholas Hoult turns in the first performance I have truly enjoyed for the character of Beast.

Everything else. From editing, to visual effects, to the scriptwriting, to the phoned-in acting of Jennifer Lawrence, to continuity, this film is a stinker. The dripping-cheese dialogue is gag-inducing and the lack of continuity not just of the Brian Singer films (“X-Men,” “X2,” “X-Men: The Last Stand”), but also all the “First Class” movies of the current series. I think the producers had a specific story they wanted to tell over the course of multiple movies and instead of dropping that idea when limited to one final movie, they just crammed it all in to this film. All that you read about problems with the final season of Game of Thrones you could apply to this film. Thankfully, it is only two hours long.

Back to the Good

There are some decent lessons in this movie. Charles hides the truth from Jean to protect her from pain; something parents want to do with their children every day. However, this leads to disaster once Jean does find out. His motivation to hide the truth is not very clear and more importantly, not necessary. Jean already had an inkling that she had special abilities and deep down probably understood that it was no ordinary car accident that killed her mom. It would have been far better to help her understand that truth instead of burying it deep inside. Later, like Satan whispering to Eve, Jean hears the lie that she could become God. There is no proof that what Vuk told her is true, but it entices her all the same.

This movie has moments of brilliance wrapped up in horrible writing. It is better than “X-Men: Apocalypse” because I never walked out of the theater; although there were times the thought came into my mind. I am a fan of the X-Men stories and my expectations were probably set too high. It may be that the Marvel Cinematic Universe has skewed my idea of a good comic book movie; but I do not think this is a bad thing. I want movies to be as good as they can be in every category. When you have consistent excellence from other movies, you should no longer be okay with mediocre. The film is rated PG-13 for intense sequences of sci-fi violence and action including some gunplay, disturbing images, and brief strong language (one f-word by an unlikely character to utter it). If you want a comic book movie without depth and better than an 80’s television show, you may really enjoy “Dark Phoenix;” 65% of people posting on rottentomatoes.com certainly did. I did not. On a scale of five, my daughter rates it two and a half gifted pens, and I rate it two 1970s airbags.

END_OF_DOCUMENT_TOKEN_TO_BE_REPLACED

Benefitting the county, schools, and much more By Don Ireland   This year marks the 30th anniversary of casinos opening in the former little mining towns of Black Hawk, Central City and Cripple Creek, Colorado. In those early years, smoking was allowed inside ... END_OF_DOCUMENT_TOKEN_TO_BE_REPLACED