The Sound of Music – beautiful and masterful 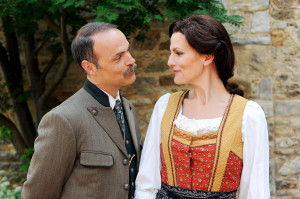 The final act for 2014 season the Central City Opera was held once again in the prestigious Ellie Caulkins Opera House of the Denver Center for the Performing Arts, performing Rodgers and Hammerstein’s The Sound of Music. Ken Cazan, who also directed this summer’s Dead Man Walking, directed the Tony Award winning musical. The Sound of Music is a story set in 1938 Austria just prior, during and immediately following the Anschluss Osterreichs; Hitler’s takeover of Austria. Maria, a problem postulate in an Abbey is sent to be a governess out “in the world” for a time before making her final decision to become a nun. Maria ends up looking after the seven children of Georg von Trapp, a retired captain of the Austrian Navy. The two fall in love, but end up fleeing to Switzerland over the Alps when Captain von Trapp is ordered to come out of retirement to assume a role in Hitler’s naval forces. Although the musical ends there, it is based on a true story and the von Trapp family eventually made new lives for themselves in America.

The role of Maria, made famous by Mary Martin on stage, then later by Julie Andrews on film, is played effortlessly by British soprano Katherine Manley, whose vocals resemble those of Julie Andrews, but without the full four octaves. Manley imbues her voice with the sweetness and uncertainty of the character and performs the role with incredible joy. No stranger to the character, Ms. Manley performed the same role in the Theatre du Chatelet in Paris just a couple years prior. Baritone Troy Cook takes on the male lead role of Captain von Trapp, marching across the stage with charisma and just a little charm. The voice that received thunderous applause after every performance however, belongs to mezzo-soprano Maria Zifchak playing the role of Mother Abbess. Climb Every Mountain is sung with such goose-flesh inducing strength and vigor; she could convince anyone they could climb Mt. Everest regardless of physical condition. The role of “Uncle” Max Detweiler is played mischievously by Robert Orth with much aplomb. Orth just about steals the scene every time he is on stage with perhaps his funniest moment giving the heil salute to German soldiers then allowing his wrist to go limp as they walk away.

You can’t review The Sound of Music without talking about the performance of the children, so here goes. Julie Tabash played the eldest daughter Liesl von Trapp perfectly. Tabash has a strong voice lending itself well to Sixteen Going On Seventeen; however, she played the role a little too perfectly. Tabash was sweet and engaging, but the awkwardness of being sixteen seemed to be missing. Perhaps it’s the fact that Julie is considerably older than the character made it lose some of the believability that we were watching a sixteen year old girl. Tabash; however, was the exception, both in age difference and in believability. Every one of the other six children nailed their roles and gave the characters a reason for being a part of story more than just one of the children. The children were all tapped from the Colorado Children’s Chorale and if this is a sample of what those Chorale kids can do then the Chorale performances are not to be missed. Louisa, performed by Margaret Pilkington, seemed underplayed a bit since she is the reputable prankster of the bunch. Perhaps being on stage, visual pranks become too small to successfully incorporate into the play. Grace Pouliot perhaps had the choicest role with Brigitta, the most precocious 10 year old girl with a penchant for brutal honesty. Cooper Causey hammed it up playing the role of Kurt and Lucy Crile was absolutely incredible as the five year old Gretl.

END_OF_DOCUMENT_TOKEN_TO_BE_REPLACED

Benefitting the county, schools, and much more By Don Ireland   This year marks the 30th anniversary of casinos opening in the former little mining towns of Black Hawk, Central City and Cripple Creek, Colorado. In those early years, smoking was allowed inside ... END_OF_DOCUMENT_TOKEN_TO_BE_REPLACED