The skies over Gilpin County 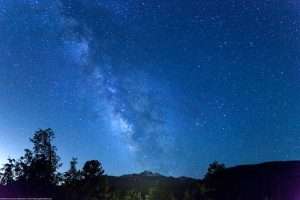 During the day a person can look up into the sky and see an airplane or two, a hawk or eagle soaring high overhead looking for a meal, and a few clouds traveling whichever way the winds aloft push them – but at night the skies over Gilpin come alive.

With the recent visit of the Perseid Meteor showers, more and more folks are looking to the night sky for live, late night entertainment. Folks drive up from the metro area to take advantage of our dark and clear skies and here we have this dazzling spectacle right over our homes. The southern horizon displays a line-up of four planets – Venus, Jupiter, Saturn, and Mars – all visible early in the evening. With a good telescope and lens, the observer can see Venus in the southwest sky in its waning crescent, then east of Venus is Jupiter with its many moons. Move over east again and there is Saturn with its famous rings, and continuing east over the area where south Denver should be, you will see the familiar reddish orange glow of our closest neighbor Mars. All of these planets are visible with the naked eye if you know where to look, but with a telescope or even binoculars, these heavenly bodies become a spectacular sight.

If the observer lies still long enough looking up after the sun goes down, you can see space junk moving about.  Spent rockets, satellites, and human made debris all travel across our sky at various speeds and in various directions again, but keep in mind they are more visible up to about four hours after the sun goes down. Occasionally the observer might see what looks like a flash from a camera. These are known as an “Iridium Flash” or “Satellite Flares.” This phenomenon occurs when the sun is reflected off of a solar panel or antenna on board a satellite and flashes down to the keen eyed observer on the ground. If an object has two solar panels, a second flash may be observed at the same location as the first. Iridium flashes are random and they are unpredictable so you never know when they might appear, but when you see one, always look for that possible second flare.

A recent observation of note was the International Space Station or ISS traveling overhead. It usually takes seven to ten minutes for the ISS to travel from horizon to horizon. The next showing of ISS will be around the end of the month. Early morning ISS shows start August 26th and run thru September 1 with the best morning being August 30 at 5:38 am. It will rise in the southwest and set in the northeast at 5:45 am. If you’ve never seen the ISS flyover, it is a spectacular sight that will be remembered for years to come. This will not be the only flyover this year for ISS; there will be several more chances to catch a glimpse of this laboratory in the sky.

The current night show headliner is the Perseid showers. According to the American Meteor Society website; amsmeteor.org, the Perseids are the most popular and longest running meteor shower as they peak on warm August nights as seen from the northern hemisphere. The Perseids are active from July 13 to August 26. They reach a strong maximum on August 12 or 13, depending on the year. Normal rates, seen from rural locations, range from 50-75 shower members per hour at maximum intensity. The Perseids are particles released from comet 109P/Swift-Tuttle during its numerous returns to the inner solar system. They are called Perseids since the radiant (the area of the sky where the meteors seem to originate) is located near the prominent constellation of Perseus located in the northern portion of sky.

On clear moonless nights, the Milky Way can be seen generally running north and south across the sky. With the naked eye it appears as a long misty cloud at high altitude, but with a scope the observer can see countless stars. The Milky Way is a large spiral system that consists of a hundred billion stars, one of which is our own sun. Early astronomers give it the name Milky Way due to the irregular luminous bans of stars and gas clouds that stretch across the sky. If you want to see the larges heavenly body in the sky over Gilpin, step out in a moonless clear night and behold a spectacular sight that will unfold right before your very eyes.

Finding these heavenly bodies can be somewhat of a challenge. If you’re like me, star charts and star scopes leave me more confused as to where these celestial bodies actually are. Enter the smart phone… there are apps available that show the observer in real time exactly what you’re looking at. For the Apple phones “Star Walk” and “Sky View” are available, and for the Android phone, my favorite is “Skeye.” These are available free or at a low price from the Google Play Store.

To enhance your nighttime celestial experience, a telescope is a value added “must have.” Most good telescopes range from $100 to $400 new. The high-end models go from $400 to $3,000 new. The better the telescope, the more you’ll see. Of course used scopes are available for considerably less from local businesses that specialize in such items. Pawn shops usually have a telescope or two on hand for sale, but is “buyer beware” in some of those cases – same goes with scopes listed on Craigslist. If you are interested in a used scope, do your homework before plunking down hard-earned cash to start your new adventure.

The skies over Gilpin by far are more entertaining than anything seen on late night television. It is live, educational, and there will be no reruns. This entertainment is a free gift from the heavens. To enhance this gift, one only needs to spend very little on a good lens and telescope. In the mid 1980’s until 2010, the enthusiastic Jack Horkheimer hosted a show on PBS called “Star Hustler.” He would always start the show with, “Greetings fellow star gazers” and explain the celestial happenings for the week that particular episode aired. At the end of the show he would always encourage his viewers to “Keep looking up” and I agree. It is well worth your time to drag the family away from their electronic devises and get outside under the stars and experience what the heavens have to offer.

For more information visit the following sites on the web: