The Shape of Water – misshapen art 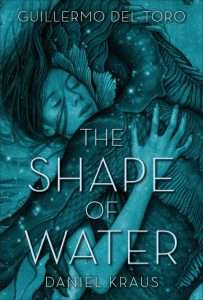 What happens when you cross Quentin Tarantino’s respect for odd history and William Steig’s “Shrek”? You get Guillermo del Toro’s “The Shape of Water.” The analogy is not great, because “Shrek” is full-on comedy parody whereas Water is intended to be neither, but it makes you wonder. Del Toro’s new movie has all the artsy elements of an Oscar contender, but can it keep its shape through the film or does its missteps not hold water?

Elisa Esposito is a mute working as an overnight janitor at Occam Aerospace Research Center set in early 1906s Baltimore. Elisa, and her best friend Zelda, witness a new “asset” being delivered to the Center and soon discover this asset is a humanoid creature recovered from the rivers of South America. The Center brought it to America to study and analyze, but Eliza quickly develops a relationship with the creature; neither one able to express themselves in language, they communicate through signs and symbols. When it becomes clear the leaders of the institution desire to kill and dissect the creature, Elisa takes desperate measures to rescue the creature, setting off a chain of discovery into the soul and intrigue.

The story. This is a movie that makes us take a good look at the imperfect and strange with fresh eyes and shows us the beauty of the human spirit. Hopefully, it will enable folks to look past stereotypes and just see each other as equally human.

The music. The score is beautiful and completely sets the tone and time of the movie.

Things that do not belong. This film was set in Baltimore, but filmed in Toronto. Exterior shots do not remind me of Baltimore in any sense of the town. The beautiful score had a lot of French influence which unfortunately made me first think this was set in Paris. The colorful language of the movie was around in the early 60s America, but it was not used in the same fashion and most of it was completely unnecessary. Racial tensions were almost non-existent; I understand that Baltimore was more forward thinking, but nobody batted an eye at different races until it was thrust upon you in one specific scene. Each time something out of period was seen or heard, as a viewer I was brought out of the movie and the story.

The pornographic nudity. I can handle nudity in a movie when it makes sense; and at times, it did in this film. Most of the time; however, it was an unnecessary part of the story telling.

The story. Yes, the story gets both good and bad. I love unusual stories that demonstrates truths of the human spirit, but this one also gave us a very obvious conclusion (I knew from the opening scene how this one would end) that cheapened the moral it was trying to teach. A misunderstood outcast falls in love with an ogre; two people that should never have a relationship, but then with a big reveal at the end, it became something much more mundane. I was hoping for a story of acceptance that could be applied to real life; couples that are different races, different economic status, different religions, can get together and it is okay. This story is not that.

This is a movie I really wanted to like. As I watched, I tried to engage on a level of appreciation of an art film, but too many things took me right out of it. I know this review will go against the grain, and perhaps I am missing something, but the problems I saw cannot be overlooked. It is rated R for sexual content, graphic nudity, violence, and language. Believe this rating; this film is not suitable for children. It isn’t suitable for many adults. I rate the film two (even that is a stretch) out of five fingers.

END_OF_DOCUMENT_TOKEN_TO_BE_REPLACED

Benefitting the county, schools, and much more By Don Ireland   This year marks the 30th anniversary of casinos opening in the former little mining towns of Black Hawk, Central City and Cripple Creek, Colorado. In those early years, smoking was allowed inside ... END_OF_DOCUMENT_TOKEN_TO_BE_REPLACED

Where the dead get to tell their story By Jaclyn Schrock On Saturday, August 21, the Gilpin Historical Society held their annual Cemetery Crawl. Tickets allowed the shuttle of hundreds of guests from the Teller House parking lot to the Cemetery. Depending on v... END_OF_DOCUMENT_TOKEN_TO_BE_REPLACED