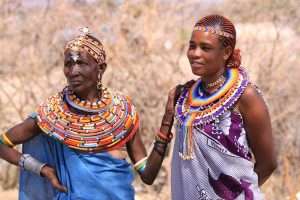 It is believed that sometime during the 15th century, a group of Nilotic people emigrated from what is now Sudan to the Rift Valley in central Kenya. Splitting soon thereafter, one band moved south and the other north. Those who went south became know as the Maasai and those to the north Samburu. Sharing common ancestry and language, there are many similarities between the two. The Samburu live in a drier and more remote part of the country and have steadfastly adhered to their traditional way of life even to a greater extent than the Maasai who also have changed little over the centuries.

Living in villages known as manyattas of five to ten families, the Samburu are semi-nomadic pastoralists who move every six weeks or so to where the grass is most plentiful. The homes of the Samburu are simple and portable. Women construct the stick framework which is covered in cardboard, plastic, bits of cloth, and goatskins. They raise cattle, goats, sheep, camels, and donkeys. Beef is consumed only during special ceremonies and smaller livestock eaten sporadically. Occasionally, morans (warriors) have been known to raid neighboring villages’ animals to supplement their own herds. Purchased maize meal made into porridge is a staple. Vegetables, roots, and tubers are the ingredients in soup and tea is drunk regularly. When available, milk is a major part of their diet with the fermented version deemed superior. In the mornings, the Samburu draw blood from their livestock by making a small incision in the jugular and sealing the wound with hot ash immediately after collection. Often consumed fresh, there are over a dozen ways to prepare blood for meals.

The name Samburu originated from the archaic Maa word saamburr, meaning “leather bag,” denoting the satchels they sometimes carry. Maasai call them the “butterfly people” because of the brightly colored Shuka/khanga attire and beadwork they wear. Red beads represent danger, bravery, and unity; black represents hardship; white (the color of milk) represents purity and good health; yellow and orange represent hospitality. Red ocher applied to their bodies and hair completes the look. Both men and women adorn themselves with the necklaces, bracelets, anklets, and armbands, but only the women manufacture them. Girls are given beaded strands and necklaces until womanhood by moran admirers. It is said that when a woman can rest her chin on them she is ready for marriage. The broad collars are reserved for the wedded and generally speaking, the more beads displayed, the greater her status. The marriages of the Samburu are with members of different villages, are prearranged, and facilitated by elders. When an important decision needs to be made the male elders of the village convenes in a circle with the women on its perimeter interjecting their opinions for consideration.

Maintaining their traditional religious beliefs, their god is called Ngai. He lives on a mountain (Mt. Kenya) that he formed as a symbol of his wonder. He then created the first man (Gikuy) and first woman (Mumbi). They bore nine daughters who became the origins of the nine clans. Like other monotheistic religions such as Judaism, Christianity, and Islam, Ngai is omnipotent, omnipresent, all-knowing, and benevolent.

Dave Gibson has been a photojournalist at the Weekly Register-Call for thirteen years. Past articles and pictures may be viewed at www.DaveGibsonImages.com.

END_OF_DOCUMENT_TOKEN_TO_BE_REPLACED

Where the dead get to tell their story By Jaclyn Schrock On Saturday, August 21, the Gilpin Historical Society held their annual Cemetery Crawl. Tickets allowed the shuttle of hundreds of guests from the Teller House parking lot to the Cemetery. Depending on v... END_OF_DOCUMENT_TOKEN_TO_BE_REPLACED

Where the dead get to tell their story By Jaclyn Schrock On Saturday, August 21, the Gilpin Historical Society held their annual Cemetery Crawl. Tickets allowed the shuttle of hundreds of guests from the Teller House parking lot to the Cemetery. Depending on v... END_OF_DOCUMENT_TOKEN_TO_BE_REPLACED