The rich Prize Mine in Nevadaville 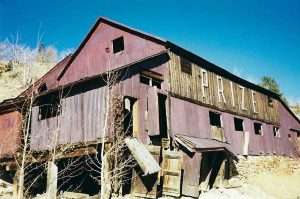 The Prize Mine possesses one of the most visible and intact mine structures, which defines the eastern boundary of Nevadaville. It is situated on Prize Hill above Nevadaville Road. Below are the works of several writers and an interview, which give the history of the Prize Mine. Frank Fossett, history and mining activity writer, presents the development and status of the Prize Mine in the early 1870s. Geologist Terry Cox provides an overview of the Prize Mine Consolidated Company and gives production numbers. Dick Ummel, retired from real estate and Gilpin County historian, explains the importance of the Prize Mine road and the use of the Argo Tunnel. In conclusion, The Weekly Register-Call article provides an interesting 20th century mine accident involving the owner in 1952.

According to Frank Fossett in 1879:

The Prize and Suderberg lodes are located on the upper portion of Gunnell Hill and close to Nevadaville. They approach each other from the west, and the claims where they unite were the scene of a great deal of trouble, when the ore bodies of 1870-1871 were paying so largely. The courts finally enjoined the Prize Company, and after a time the Suderberg men exhausted much of the ground. In two or three years the yield exceeded a quarter of a million coin value. This was one of the richest bodies of ore ever found in Gilpin County. The amount of high grade smelting ore sold was very great. There was over five feet of milling ore that yielded from six to twelve ounces of gold per cord (128 feet). The Prize lode also yielded a large amount before work ceased. Afterwards Richard Mackay took out $75,000 from the Suderberg lode. These mines are now idle, but may not be much longer. The eastern part of the Prize, called the Commonwealth property, yielded some $371,000 during the same period.

Running along the hill immediately to the north of Nevadaville are the Prize and Suderberg veins. These two are separate, parallel veins near the surface, but they converge to form one rich vein at depth. Two independent and profitable companies worked the veins separately until the 1870’s when they discovered the veins intersected. As usual, each company sued the other, claiming that it owned the downward continuation of the united vein. For eight years, only the companies’ lawyers made any money.

Unfortunately for the lawyers, the Prize Consolidated Company settled the litigation. The company bought both properties and returned to the business of mining. From then on, production was sporadic because of water problems. However, the ore was rich and records suggest the mine ranked among the top producers in the area. Records suggest the mine produced about 130,000 ounces of gold and 310,000 ounces of silver.

The owners planned the mine’s development fairly well, and it should have produced gold for many years. Mining ground to a halt, however, with the 1929 stock crash. Except for an isolated production report of seven ounces ten years later, it never reopened. Ignoring the extreme cost of extraction today, the Prize Mine is possibly one of the few that still has much gold ore left.

Per Gilpin County railroad historians Abbott and McCoy – The Hubert Mine Extension:

Meanwhile, in mid-May 1888, rapid headway was being made by the Gilpin Tramway Company in extending its switchback from the Whiting and Gunnell to the Prize and Hubert mines in Nevadaville. As large a force of men that could be mustered was put to work on this branch line under Foreman McCormick. The tram would haul ore to the mill in Black Hawk for processing. This was the primary transportation of ore to the mill prior to the Argo Tunnel’s completion.

The Prize Mine Road was a well-traveled road. From Main Street Nevadaville, travelling east to the Prize shaft house, the road was an extension of Main Street, known as “the high road.” This road was flanked by houses, a hotel, a boarding house, other businesses, and a stage stop.  From the shaft house to the north and then west down Prosser Valley, the road was both a road and the Gilpin tram railroad. Nevadaville workers used it to have access to the following mines: the Concrete, Fagen, Eureka, Golden Collar, Grand Army, Gunnell, and many other mines in Prosser Valley. The road also provided quick access to Central City. In 1911, Nevadaville mine workers could take the Prize Road and gain access, through any one of the five mine shaft houses, to the Argo Tunnel and end up in Idaho Springs.

Don Russell had a terrifying experience on Monday last in the shaft of the Prize Mine in Nevada District, which is owned by him. He was lowered to the 800-foot level by bucket, and after spending an hour taking samples in the drift (tunnel leading off the main shaft), rang the bell for the engineer on top to lower the bucket. When the friction on the electric hoist was released, the bucket descended to the level, but when the power was applied to the hoist to bring the bucket to the surface, the friction clutch refused to mesh with the drum and Don was left stranded. He started up the way to climb to the top and after going a couple hundred feet one ladder fell out from under him and the one directly above was already out which left him stranded in between, unable to go up or down. In the meantime, Gene Lambard, the engineer, unable to fix the hoist, went to town for help – getting Buck Gregory and Roy Mumford. Buck and Roy then descended down the shaft with a rope and hoisted Don to the first level which still maintained a ladder and the three then ascended to the surface. Don then discovered the trouble with the hoist, it being a loose bolt. The only injury to Don was his feelings and apprehension, and he does not want to repeat the incident.

END_OF_DOCUMENT_TOKEN_TO_BE_REPLACED

Benefitting the county, schools, and much more By Don Ireland   This year marks the 30th anniversary of casinos opening in the former little mining towns of Black Hawk, Central City and Cripple Creek, Colorado. In those early years, smoking was allowed inside ... END_OF_DOCUMENT_TOKEN_TO_BE_REPLACED