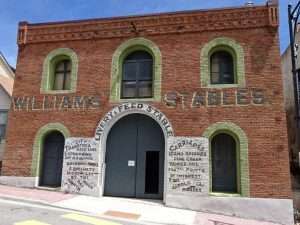 PRESS RELEASE – The Peak to Peak Players theatre company has entered into collaboration with the Central City Opera to utilize the historic Williams Stables in Central City. This will further enable their mission to entertain, enrich, and inspire the rural mountain communities in the Peak To Peak region by producing a wide variety of high-quality productions. Working with Mr. Eric Chinn, Director of Properties for the Central City Opera, the Peak to Peak Players company volunteers are renovating the space.

The Grand Opening Event will be held on Saturday, October 5th at 5:45 p.m. with dinner at the JKQ Restaurant in the Teller House, followed by the Ribbon Cutting Ceremony at 7:00 p.m. Tickets for the event are $5.00 dollars each and include a BBQ dinner. A cash bar will be available at JKQ. Find out more and get tickets at www.peaktopeakplayers.com.

Beginning at 7:30 p.m. will be our featured performer of the evening, Mr. Doug Fisichella. Doug is a singer/ song writer/ performer who was recently featured in the role of “Donkey” in the Peak To Peak Player’s summer musical Shrek.

Starting at the age of 9 on the drums, he teamed up with his brother Nick to form his first band. Moving to Colorado in 1991, he joined an R & B band called In Pursuit. Later, he joined a southern style act called River Road West in Colorado Springs as the lead singer and playing guitar. Currently utilizing his own recording studio and creating his own original material, he is preparing for the upcoming release to be titled “Forever Endeavor.” Doug’s natural charismatic performance as Donkey was certainly a highlight of the 2019 musical Shrek.

Jacquelyn O’Brien has been appointed Stables Manager of Peak to Peak Players at the Stables. She will be directly in charge of all bookings and will oversee all aspects of the new rehearsal and performance venue.

To develop and foster the artistic talents of company members, community members, and local youth through participation and educational classes, the first Basic Theatre Technique class will be held on September 22nd, starting with 12 students. Jess Schmeling, a graduate of the American Academy of Dramatic Arts in New York City will be the instructor.

The Peak To Peak Players at the Williams Stables will be developing a variety of performance and community activities. Planning is underway for movies, cabarets, plays, as well as musical performances.

END_OF_DOCUMENT_TOKEN_TO_BE_REPLACED

Where the dead get to tell their story By Jaclyn Schrock On Saturday, August 21, the Gilpin Historical Society held their annual Cemetery Crawl. Tickets allowed the shuttle of hundreds of guests from the Teller House parking lot to the Cemetery. Depending on v... END_OF_DOCUMENT_TOKEN_TO_BE_REPLACED

Benefitting the county, schools, and much more By Don Ireland   This year marks the 30th anniversary of casinos opening in the former little mining towns of Black Hawk, Central City and Cripple Creek, Colorado. In those early years, smoking was allowed inside ... END_OF_DOCUMENT_TOKEN_TO_BE_REPLACED