The modern era of beer 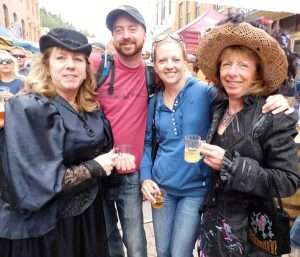 On Saturday, August 27, 2016, Central City hosted its fifth annual beer festival with three bands, 15 vendors, 19 breweries, and more than 50 beers for sampling. The festival reflects a nationwide trend among microbrews of increasing sophistication and finesse among their brews; whether from need to stand apart or desire for uniqueness is open for debate.

Since the beginning of time, humans have been trying to find ways to create foods and beverages that make them feel “good.” The fermentation of grains for a beverage goes back about 7,000 years to the first known mention. Basic beer is made from a grain, usually barley, hops, water, and yeast. The brewer extracts the sugars from the grains by heating dried and cracked grain in hot water; much like making tea. The resulting liquid, called wort, is sticky, sweet, and full of grain sugar. The wort liquid is then boiled with other ingredients, commonly hops. Hops are the cone-like fruit of a vine plant that counteract the sweetness of wort with bitterness. Hops also act as a natural preservative which is why they were used in the first place. After boiling, yeast is added and the wort is strained into a vessel for fermentation. Many beers ferment for about two weeks; although some take only a handful of days and others choose to ferment longer. The yeast eats up the sugar and spits out alcohol (and CO2). That’s a basic, un-carbonated beer. Depending on the fermentation vessel, the CO2 released can be a natural carbonation; otherwise, beer is artificially carbonated similar to soda.

For many years, beer did not stray too much from the basic recipe with one notable exception being the addition of chocolate. In fact, in 1516, the Bavarians (modern Germany), enacted a law that permitted beer to be made from barley, hops, water, yeast, and sometimes wheat only. Just as what might be considered craft brews started to take off in the early 20th century, prohibition was enacted effectively halting the creativity beginning to emerge. Home brewers began the process again later in the century, but it is not known exactly when the sophistication of modern brews began. In 1982, the first Great American Beer Fest (GABF) was held in Boulder, Colorado, hosting 20 breweries serving a total of 35 beers. The GABF today features more than 2,000 beers. Sometime between 1982 and today, microbrews began not just making common beers; ales, lagers, porters, stouts, etc., but also introduced a little sophistication with their ingredients; balancing multiple grains; hops, and malts; adding interesting flavors such as juniper boughs (juniper berries are typical for IPA’s, but adding the whole bough is new), mango, banana, cloves; and using bourbon and other hard alcohol barrels for fermentation to finesse the flavor. A truly discerning palate can enjoy multiple flavors sampling different brews.

The Holidaily Brewing Company is the west side’s only gluten-free brewery. The founder was diagnosed with celiac disease and wanted to create a beer for other gluten-free folks that not only had no gluten, but also tasted good. Their new brewery in Golden features a whole line-up of tasty brews and often is visited by the Gluten-Free Affair food truck parked outside.

If you missed it again this year, never fret. The popularity of this event promises that it will return in 2017. If you like beer; even if you only like it a little, but have never ventured far down the microbrew path, this event is for you. The next major events for Central City are the Hot Rod Hill Climb on September 16 and 17, and then the Creepy Crawls two weekends in October.