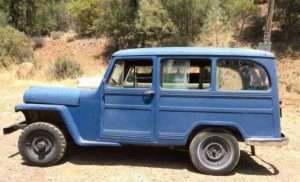 If we were going to spend a winter in the house we were building, we were going to need more than the 2-wheel drive truck we had. That fall, Dad brought home “The Jeep.” We just called it The Jeep since we didn’t really name vehicles and we only had one Jeep. Dad had already taught me the basics in the truck and I had been steering around rocks for him all summer from the passenger seat at 12 years old. But back to the Jeep…

The 1953 Jeep Willy’s Wagon was a little more complicated, and it took a while at that age for me to get all five gear shift levers correct in my head.

The tallest and most obvious one was the main gear box. Gears 1-3, reverse and of course neutral (which isn’t exactly a gear).

We also had an overdrive which I never really learned how to use since it was supposed to be for higher speeds. This was a separate control which I never needed.

Then we had the shifter that switched between 2-wheel and 4-wheel drive. Often I would have to get out and lock or unlock the hubs as part of our trek one direction or another.

Our transmission also had another shift on the floor that would change all of the first set of 4 gears (yes, even reverse) into a lower version of each once it was in four-wheel drive.

Finally, the last thing in the cluster on the floor was the gear shift for the PTO winch. When the winch was engaged, the engine and clutch controlled the speed going forward or reverse.

The entire chassis and body was raised up higher (out of the snow) by special suspension. This made it almost impossible to climb into without a hand up. It wouldn’t be until next year that I actually drove the Jeep (and never on the public roads), but I spent hours upon hours in the Jeep, occasionally jumping out and then back in and back out again. Not just for the hubs, but also the occasional barbed wire fence or to run the winch out to a nearby tree.

I preferred when dad pulled the cold cable out of the box, trudged through the snow to wrap it around a tree and clip it to itself while I got to operate the winch from inside the warm Jeep.  That didn’t happen often, but it did once or twice.

After getting off the pavement and to the Boodle Mine above Central City we would stop and I would hop out and lock in the hubs so Dad could switch to 4 wheel drive. First one, then the other, then hop back in. That was pretty simple.

Depending on whether there was snow falling and how much, we might also have to stop and put on the chains on our oversized tires. For this I would jump up on the back bumper, lift the top window, then release the latches on the left and right sides of the heavy tailgate and lower it slowly. Then we could get all the chains out and separate them before we put them on. We had chains for all four tires, but sometimes we would just put them on the front.

For each of the tires we would untangle the tire chain and lay it in a line in front of the tire. When two or four were lined up, Dad would drive slowly on top of the chains and stop about three-quarters of the way. That way, when we pulled the rest of the chain (now behind the tire) up around to meet the other chain it would be easier to fasten them together without one or the other end constantly falling down into the snow. Mittens are out of the question to get this job done, and gloves would only get you so far. By the time we were attaching the chains we usually went down to bare fingers that were getting colder and colder by the moment. Keeping chains out of the snow was really self-preservation to keep your fingers out of the snow.  Once the ends were connected on both the inside and outside of all the tires, we crisscrossed rubber bungie straps across the tires and got back into the warmth of the Jeep.

Now, here’s what many people don’t realize about snow. They think of it falling down, but they don’t really think about the blowing snow unless they’ve experienced it themselves. Even a day of no snowfall while it is windy, could change our ability to get home easily or at all. So, while there was a fair amount of just driving through the snow in our Jeep while in 4 wheel drive with chains – that wasn’t the real problem. It was the snow drifts.

The Jeep was able to go through a lot of snow, but even she had her limits. My Dad always said that 4 wheel drive was for getting you out of shit you shouldn’t have done in 2 wheel drive.  Of all the times we were stuck in the snow, we were never stuck both directions by accident.

Not only did the two of us know the road and each drift location well, but we also knew exactly how far our winch would reach and which trees were nearby from previous experience. Dad knew exactly how far into the drift to take the Jeep without getting stuck before backing out and hitting it again and pushing a little further. Once we were far enough into the drift that we could reach a nearby tree with the winch, Dad would push the Jeep even harder into the snow. Sometimes we would even go hard enough that last time to bust through the drift and be able to travel on for a bit.

Eventually though, we would get to a drift that we knew the Jeep couldn’t handle. We would repeat the previous steps to get within winch distance of a tree. Then, I would then get out, get my hands dressed again for the cold and pull the cable out as Dad ran the winch in reverse. He would keep the engine running at just the right speed for me to walk into the snow, pulling the long cable behind me while still keeping it tight. Then I would wrap it around a tree and clip it back to itself. Depending on just how far away the tree was we might also need to extend the reach with one or both of our heavy pull chains which were also kept in the back of the Jeep at all times. Dad would get the chains out and follow through the snow in the path I made to the tree and would then help get everything connected on these bigger jobs.

Then we would get back in the Jeep and Dad would put the winch in gear and let it pull us through the drift.  This sounds pretty exhausting and labor intensive just once. There were times that we did this three times in a single section of the road. I could point to the section today if I were to drive by it.

Mostly though we pulled ourselves through drifts only when we had to. Sometimes that meant we could only get so far toward home before we had to walk the rest of the way.

END_OF_DOCUMENT_TOKEN_TO_BE_REPLACED

ShareTweetShare on Google+Pin on PinterestSend with WhatsApp
14 recommended