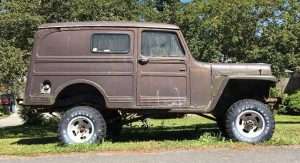 The photo of the Willys Wagon is not our Jeep, but it is very close to it though. I took this photo in June 2016 while on family vacation in Washington state. It was parked on the side of the road, likely unused until winter.

Ours was nearly like this, but there were some custom modifications that made it even more of a beast.

It was nearly this bronze-brown color, but darker and two-tone cream panels that made it look more like a panel wagon.

The rear windows on ours went all the way to the back, with the furthest back being sliders.

We had an extra fuel tank behind the passenger seat, so there was another gas fill-hole and cap on the same side, but closer to the front.

We also had five gallon Jerry cans hanging on both sides just in front of the doors.

Our Jeep had heavy steel bumpers on the front and back.

We also had a PTO winch (this one didn’t, I looked).

My family bundled up and drove home in the Jeep during winter as far as we could. Sometimes we would park it either at a friend’s house either in town or at a place we called the ranch and take our snowmobiles from there.

Many, many times my father would be driving our family along home and find another 4×4 stuck in the snow. Sometimes they were even stuck exactly where we needed to drive through to get home.

Dad would hop out of the Jeep and introduce himself by walking through the snow toward them and assessing the situation.

If this poor soul was stuck because he and his friends forgot the golden rule of what a 4 wheel drive is for; or if he was stuck so bad that his 4×4 club buddies had already tried and failed to pull him out; or especially if he wasn’t polite… Dad would charge the driver $50 to $75 to hook up our winch and slowly pull him back out of where he shouldn’t have been.

If this was a man out with his family for a weekend of sightseeing in their 4×4 and just happened to go a little too far because he never learned the golden rule, Dad would pull them out for free, then direct the driver and his family to a better location and probably share the golden rule again.

Sometimes we would pull folks out of snow banks, other times it was the annual spring bogs, and more than once we pulled people out of Pisgah Lake.

The most memorable time was when my father got to pull out the realtor that sold us the property that we owned. My father had always felt like they were dishonest when they sold the first piece of land to us near the Buck House. Dishonest in that the road on Bald Mountain west of Central City was not plowed throughout the winter as they stated.

This time they had come out to check out the land we swapped our original property for a couple of years prior. They got stuck in the snow in a place on our property that they shouldn’t be driving through. Not because it was our property, but because it was impossible to drive through that drift. I knew because it was part of my walk to school.

I did learn how it was possible to be stuck with a winch when it was electric if you didn’t know enough to keep the engine running. They had run down their battery on their fancy Jeep Cherokee by endlessly trying to pull themselves deeper into a drift.

Dad pulled them back out and charged them, though I don’t know what. He and Mom laughed about how they got stuck on our property for many years after.

END_OF_DOCUMENT_TOKEN_TO_BE_REPLACED

Benefitting the county, schools, and much more By Don Ireland   This year marks the 30th anniversary of casinos opening in the former little mining towns of Black Hawk, Central City and Cripple Creek, Colorado. In those early years, smoking was allowed inside ... END_OF_DOCUMENT_TOKEN_TO_BE_REPLACED