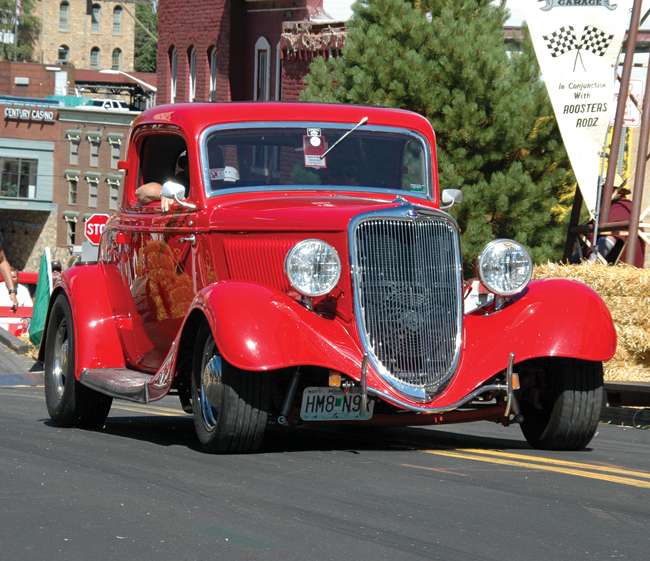 Central City’s most fun and family-friendly event of the summer!

“The Hills are alive with the sound of raw power.” Not exactly like the Julie Andrews version, but close enough. This raw power signifies the return of a very popular event, the Central City Hot Rod Hill Climb hosted by Nick’s Hot Rod Garage of Englewood.

The free two day event was held Friday and Saturday and drew 140 hill climbing hot rods, custom cars and trucks, along with scores of cars on static display on Main Street. The event drew drivers, gearheads, and fans from all over the U.S. States and several countries, including Australia and Canada. According to Cal Kennedy the event patriarch, 35 different hot rod magazines from as far away as Japan all descend on our mountain county to attend this event. Vendors lined the north end of the Big-T parking lot selling hot rod memorabilia, T-shirts, hats, used parts, and other items. Pit passes were available for $10 so fans could enter the pits, mingle with the drivers, and get a close-up look at these amazing cars. Additional sponsors included Rooster Rods of Colorado Springs, Marvel Mystery Oil, and many others.

Friday’s activities kicked off with a morning Reliability Run that started at the Wooly Mammoth parking lot at Hwy 40 and I-70 which featured 60 mile run of “The most amazing scenery in the Rocky Mountains” that concluded at the Big-T lot in Central City. Hot Rods started arriving Thursday night and checked in the entire day on Friday with some of them doing low-speed test runs up the hill to the KOA Campground. Old friends caught up, new friendships blossomed, and smiles were the required attire. As one unidentified driver put it, “This is not just an event – it is more like a family reunion.”

Rodders were all too happy to share their war stories about their journey to Central City. One such tale was that of Tim Evers, wife Angie, son Sam, and daughter Natalie. They set off for Central City from Milwaukee, Wisconsin. According to Mr. Evers, “We pulled the kids out of school, trailered the “T,” and headed west.” His car, a 1927 Ford Model T Roadster, sported a Ford V-8 Flathead from which parts were sourced from several barns. The body, frame, and motor were all discovered in different locations. Tim started his “T” project 23 years ago when he was 17 with a little help from his dad, who owns an original Model T he bought in the 1960’s. As the Evers family demonstrated, this is a fun event for the whole family.

A large variety of food was available at the Dostal Ally Food Court. Food was served up that would satisfy every pallet and taste. Then you could wash down those fine eats with a modest selection of craft beer available from “Buddy and the crew” at the Dostal Alley Microbrewery.

Rockabilly, 50’s tunes, and Honky Tonk music enhanced the festivities at the stage located at the north end of the Big-T lot with bands such as, Coop & Chicken Pluckers, Ethyl and the Regulars, and The Hillbilly Hellcats. The Wild Bunch entertained the crowd with their hourly shoot-out performances, and as amazing as it was, not a single car was hit by any of the bullets. Either the Wild Bunch are really good or really bad shots.

Hill Climb runs normally go until 3 p.m., but this year the course closed around 2 p.m. due to a minor incident that took place just before turn one. No other details were available except that the driver and passenger were okay with just a few stitches, and the car is fixable.

After all the cars were back in the pits and engines cooled, it was time for the awards. Event organizer Mike Nicholas presented a driver-signed Hot Rod Hill Climb poster to Central City Mayor Jeremy Fey, and both expressed their pleasure with the fun event and look forward to the next one. Special thanks was sent out to the residents on Spring Street who allowed this event to inconvenience them on Saturday.

The Killer Thrash award went to Dale Ohays and teammate from Australia who picked up their hot rod in Texas on Thursday and drove all night to make the event, changed out the rear end for lower gears to make the hill climb, and blew up after just one run up the hill.

The Beast Banger award went to EJ and Brad Dennis.

The Most Runs Up the Hill award went to Greg Widgery (kid being pulled in a wagon by his dad).

The Throttlers award went to Chris Sutton and his Model A.

The Vern Holmes award went to Ted Allan in his 27 T.

The Precision Pick award went to Darrell Climbanin and his 29 Roadster.

The Derelict Drivers award went to Archie Rosenow and his 1930 Model A coupe OHV.

The Ken Schmitt award went to Willy Wilcox in his 1928 Model A pickup.

The Fuel Pump award went to Okie Joe (he had to borrow some gas to do more runs).

And the Hammer Down Award went to Charlie Palmer who put on a great smoke show from the starting line.

We would all like to give a big thanks to the Hill Climb Staff (the Roosters) and Technical Inspectors that kept the drivers, passengers, and the spectators safe for a trouble-free event. Also to Mike and Amy Nicholas, his family, and the folks at Nick’s Hot Rod Garage which did a first class job presenting the 2019 Hill Climb. We all look forward to a spectacular 2020 event next year!

END_OF_DOCUMENT_TOKEN_TO_BE_REPLACED

Benefitting the county, schools, and much more By Don Ireland   This year marks the 30th anniversary of casinos opening in the former little mining towns of Black Hawk, Central City and Cripple Creek, Colorado. In those early years, smoking was allowed inside ... END_OF_DOCUMENT_TOKEN_TO_BE_REPLACED