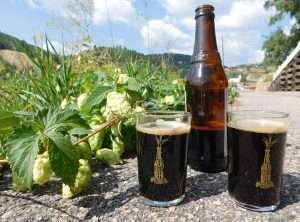 On Saturday, August 22, 2015, Central City hosted the 4th Annual Great Central City Beer Festival. Even with same day competition from the Boulder Craft Beer Festival, the Annual Brewer’s Alley in Denver, the Grand Opening Party of the Tivoli Brewing Company, and the Brews and Crews event in Grand Lake, Central City’s event attracted eighteen brewers, one hops supplier, and one malt and barley grower and distributor to line Main Street and show off their products. This was the biggest year yet for Central’s Beer Festival and it showed from the crowd gathered that day. Many came up from the Denver area for this popular event and although most of the day was beautifully partly cloudy, when the rains came, everyone squeezed underneath the tents of the vendors. As I walked down Main Street during the brief rainstorm, I listened as vendors and customers joyfully conversed about the beer and the weather. The bands playing on one end of the street were great as usual and the whole street exemplified the whole idea of festival… for adults. You just can’t expect a beer festival to have much for the younger crowd. This event was not just for brewers, though, as twelve other vendors advertised their services and sold their wares including Reliving the Past Studio, Mountain Goat Gallery, Simple Beauty, and Courtney Creations.

As a special treat, author Maggie Magoffin set up her own booth to show off the last remaining 1906 Elmore Convertible known to exist, originally owned by Central City businessman Peter McFarland and was the first automobile in Central City. Current owner, Don Vaughn, spent over ten years restoring this rare care and was the first time it was on public display in over thirty years.

As I toured each stall, I listened to the brewers boasting about their products and I asked each of them the same question: What advice do you have for home brewers? The following is a list of brewers along with their answers.

AC Golden – Steve Fletcher advises to visit your local brewery and talk to the brewers. The folks behind the craft brews are more than happy to give you pointers and tell you how they do it. AC Golden is located in Golden, Colorado, and home to the Colorado Native India Pale Lager. It is “full of hop flavor, not hop bitter,” as Fletcher puts it.

Bakers’ Brewery – Brewmaster and co-founder Cory Forster was not able to make it to the event, but sent the very capable Jeff Curphey, Ryan Perdu, and Bill Jarmon in his place. They advise home brewers to keep tasting and expanding your horizons. Baker’s is located in Silverthorne and true to its name, bakes every food item offered. They have a unique beer, the Mango-Ginger Saison which tastes much like it sounds.

Barrels and Bottles – Zach and Abby George founded this brewery in Golden and would tell home brewers to not give up even if you have a bad batch; also, “If it tastes bad, don’t drink it.” The George’s crafted a wonderful Serendip Saison using cherry products from Lyons, Colorado.

Boggy Draw – Adam Martinez and Mac McAster offer this advice, “Don’t be afraid to try anything different.” Boggy Draw, open for seven weeks in Sheridan, Colorado, got its name from a favorite location near Dolores, Colorado where owner Dave Miera grew up.

Blue Moon – Keith and Jodi Villa, founders of the craft brewery, would advise you to keep at and have fun experimenting. The Villa’s were sampling several varieties including a Cappuccino Oatmeal Stout taste explosion.

CB & Potts – Tom Herber, head brewer at the Westminster restaurant, along with Suzanne Herber would caution home brewers to pay attention to details. “It’s as much science as art,” stated Tom. CB & Potts has five small breweries along the Front Range servicing their own restaurants and just a little beyond.

Colorado Malting Company – Wayne and Sandra Cody did not have advice any for home brewers unless people want to start a mini-farm in their backyards. The Cody’s grow much of the malt and barley for brewers in Colorado, supplying over 100 craft breweries and distilleries out of 300 acres of farmland in the San Luis Valley.

Dostal Alley – Owner and brewmaster Buddy Schmalz advises to “keep things fun.” Buddy was sampling just about every brew they offer including the exclusive Smoked Porter. Schmalz was also excited about an upcoming variety he experimented with last year, Smoked Pumpkin Porter.

Epic Brewing – John Turk, Richard Tucker, and Ben Robbins give the advice to take your time, start on the bottling line to learn the process, and to disinfect your home. John Turk is the ex-radio DJ host of the Colorado Craft Beer Show on AM 760 who signed off in June 2015 to spend more time with his family.

Grand Lake Brewing – owners Warren and Karen Wood along with Kaitlyn West would tell home brewers that sanitization is the biggest thing followed by “don’t skip steps.” Although founded in Grand Lake, Colorado, the brewery opened up a tavern in Olde Town Arvada and will have a second one in Greeley this October. The Woods were sampling their Kickingback Peach beer made with Palisade Peaches.

Our Mutual Friend – Michele Garret, Kayla Schleu, and Mitch Leavelle emphasize the importance of having a good temperature regulator to control the fermentation process. They proudly sampled their newest creation, Ellipsism. An odd name for a beer since it means “a sadness that you’ll never be able to know how history will turn out.”

Ratio Beerworks – Zach Lowery and Hunter Grondin give the advice to “get your beer right” and “always follow your passion.” Ratio Brewery, open for six months, was given the honor of being the official 50th Anniversary Beer of Larimer Square. All of their beers are named after song lyrics or album titles.

Sherpa Brewery – Sherpa Brewery is not a local beer, but it is brewed and distributed through Golden City Brewery in Golden. The actual brewery is located in Nepal and Lhakpa Sherpa assured me the brewery has not been damaged by either the earthquake heard round the world on Mount Everest or the following quakes the region has been experiencing. The Sherpa family continues to raise funds for and awareness of earthquake victims in Nepal. And yes, at least two of the Sherpa’s in Central City for event have summited Everest multiple times.

Tommyknocker – Jim McCann represented our mountain neighbor to the south, Tommyknocker Brewery and Pub, and gives the advice to “keep believing” and to craft “recipes you enjoy.”

Very Nice Brewing – Jeff Green represented our mountain neighbor to the north, Very Nice Brewing Company in Nederland and his advice to home brewers nicely sums up what all the others were trying to say using only one word; “Enjoy!”

Voss Farms Front Range Hops – Andrew Voss and Chris Anderson also had no advice to home brewers, but they did have an invitation to “come pick hops with us.” Voss Farms is located in Arvada, Colorado, and grows hops for several craft breweries including Gilpin’s own Dostal Alley.

The Great Central City Beer Festival of 2015 seemed to be a great success and Joe Behm, executive director of the business improvement district, envisions this event to continue for many years to come. If you missed it or even if you made it this year, be sure to check it out next year. And remember, in the word of Jeff Green, to “enjoy!”

END_OF_DOCUMENT_TOKEN_TO_BE_REPLACED

Where the dead get to tell their story By Jaclyn Schrock On Saturday, August 21, the Gilpin Historical Society held their annual Cemetery Crawl. Tickets allowed the shuttle of hundreds of guests from the Teller House parking lot to the Cemetery. Depending on v... END_OF_DOCUMENT_TOKEN_TO_BE_REPLACED