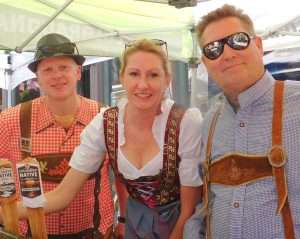 As of May 2017, Colorado is home to 348 breweries and this year has more than 37 beer festivals scheduled around the state. The Great Central City Beer Fest, held last Saturday, August 26, 2017, is in its 6th year and remains a strong, well-attended event for Gilpin County bringing a score of brewers to its street to show off their product. Many of them hold medals from the granddaddy of them all, the Great American Beer Fest (GABF), held in Denver. Most of the names are familiar to Central City and it is a wonder some of them are still in business. There are six micro-breweries in the city of Golden itself vying for dollars from a limited pool of thirsty malt beverage imbibers. Surprisingly, the Golden brewers don’t see themselves as competing, instead they treat each other as family; sometimes squabbling, but ready to help out in a heartbeat when another is struggling. This made me curious, if the brewers themselves are not competing with each other, how are they staying in business? That’s the question I asked as I talked to each vendor.

This year twenty-one brewers were scheduled to appear as posted on the website, but six of them did not show. Kara Tinucci of the Business Improvement District (BID) commented that most of them had last minute things come up; a vehicle broke down, a death in the family, etc. and that’s just the nature of these festivals. Not everyone booked will make it. An hour after opening, you would never know there were only 15 brewers on the street; it was packed with happy people hopping from booth to booth.

Dostal Alley – Central City’s home brewers anchored the north end of the street and on hand were Barry and Dave Thomas. Barry said they stay competitive by being the only brewpub casino in Colorado. While that might not be a very impressive statistic, Dostal has won four medals at GABF and as Barry says, “We make good beer.”

Tommyknocker Brewery – Jim McCann boasts they “won over 200 awards” at GABF. They have been in the business for 20 years and McCann says the secret is they have created a niche in their relatively small market of Idaho Springs residents and tourists, and they have a committed clientele.

Cannonball Creek – Just drive by Cannonball’s tap room on any given evening at the bottom of Hwy 46 and Hwy 93 and you will see this is a popular brewery. Brian Hutchinson says they stay competitive by having “high-quality beer, a huge tap room, and not getting involved in distribution.” After a pause, Brian added, “And being generally nice guys.”

Golden City Brewery – Golden City has been around for 24 years and is the second largest brewery in Golden in terms of production (Coors being first, naturally). Josh Norton said they stay competitive by “churning out new and different beers, networking, and entering festivals like this one.”

New Terrain Brewing – New Terrain is the newest brewer in Central City this year. They opened in early 2016 making them the 6th brewer in the city of Golden, albeit separated from the pack on the east side of North Table Mountain. Mike Helms, the self-named general manager, said they will stay competitive by using a wide variety of styles in their brewing; from barrel aging to flavor infusing. New Terrain featured my favorite beer this year, a black current sour.

Westbound and Down – Another Idaho Springs brewery, Rafi Kelley says they will remain competitive because they “brew styles true to what they are” and will remain consistent. They take the old recipes and don’t deviate from the procedure to produce good quality beer loved by many generations.

Barrels and Bottles Brewing – Barrels and Bottles combines the best of two worlds, wine and beer. They brew the beer themselves, but featuring many Colorado vintages in their tap room. Greg Moore says they stay competitive by “making good beer, clean, balanced.”

Holidaily Brewery – the only gluten free brewer represented and one of only a handful in Colorado, Holidaily doesn’t have to worry about competing. Kelsey Benjamin commented that they are “on tap” in a lot of the other breweries. The do not advertise as being gluten-free in their name or on their building, so they have many people come in and are happily surprised that they are drinking high-quality gluten-free beer.

Sandlot Brewery – Located in Coors Field, the Sandlot is a unique brewery serving many baseball fans. Affiliated with Blue Moon Brewery, they have creative license to create their own inspirations. Tom Hail says they stay competitive because they “make clearly superior beer.”

Mad Jacks Brewery – Mad Jacks opened their brewpub in Bailey last year and Jack Hansell says they stay competitive because “there is nobody around us for 35 miles.” They are the first in Park County and distribute to the shops around the County. Of all the breweries in Central this day, Mad Jacks is the only one not entering GABF this year. Hansell says that is their goal, but they want to take time to make a killer beer for 2018.

Colorado Native – This is probably the most recognized brand outside of Gilpin County, being featured in restaurants and liquor stores alike. Steve Fletcher commented contrarily that they stay competitive by having “a great sales team” getting their brand into many places.

Tivoli Brewery – Corey Marshall was the only brewer to come back with “it’s (the market) not saturated enough” and “we need more brewers.” Perhaps he is right, after all, there is only one brewery in Colorado for every 16,000 people.

C.B. Potts – This is the only brewery that represents a restaurant chain. Tom Herber was there for the Westminster restaurant and he said that each restaurant has its own independent brewery and brewer with license to create whatever they want… as long as it sells. Tom says their name recognition keeps them competitive, and the variety. There are 16 beers on tap in the Westminster store.

Most of the brewers seem to stay competitive by consistently brewing great beer. They each seem to have a loyal following that keeps their businesses growing. Their strategies outside of the beer itself; distributing or not, entering festivals, being active in the community, or creating their own niche, appear to be working for these folks.

The Great Central City Beer Fest drew hundreds of people to their tiny town, so to their credit, the festival is working to not only support the brewers there, but also to keep the town on the map as a place to be. Even though the number of brewers was down from years past, it appears to have been only a hiccup in an otherwise successful event.

END_OF_DOCUMENT_TOKEN_TO_BE_REPLACED

Benefitting the county, schools, and much more By Don Ireland   This year marks the 30th anniversary of casinos opening in the former little mining towns of Black Hawk, Central City and Cripple Creek, Colorado. In those early years, smoking was allowed inside ... END_OF_DOCUMENT_TOKEN_TO_BE_REPLACED

Benefitting the county, schools, and much more By Don Ireland   This year marks the 30th anniversary of casinos opening in the former little mining towns of Black Hawk, Central City and Cripple Creek, Colorado. In those early years, smoking was allowed inside ... END_OF_DOCUMENT_TOKEN_TO_BE_REPLACED