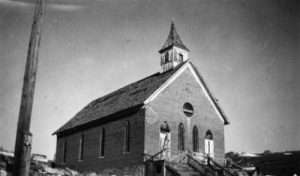 Nevadaville Notes in the early 1900’s

News from the Gilpin County Miner, December 7, 1939 by William C. Russell, Jr.: “The Methodist Church in Nevadaville was recently been purchased by Mrs. Mildred Zook of Hinsdale, Illinois, and she plans to make an Art Studio of it. Wm. C. Russell, Jr., is boarding it up for the winter. Gordon Starbuck has purchased the old Meyhew residence and has started fixing it up. Someone has purchased the brick Odd Fellows building and is tearing it down and hauling the brick away. It is said this is one of the oldest brick buildings in Colorado and that the brick were hauled here with ox teams. The population of Nevadaville has increased greatly in the last year and the residents intend to hold an election next spring and be on the map. R.L. Otis and associates are planning to lay a pipeline and increase the water supply for their mill so that they can run three shifts in treating the California dump. Because of water shortage they are running only one shift now. D.L. Russell and associates are making preparations to put the well-known Prize Mine in production again. This will give employment to many men. H.A. Horn is busy with his trucks hauling the California Mine ore dump to the Otis Mill.”

William “Bill” Russell moved to Nevadaville, from Denver in 1937. He wrote a short column called “Nevadaville Notes” for a little paper that didn’t last long called the Gilpin County Miner. Bill Russell watched over Nevadaville long after he moved to Central City in 1944, and became an elected official of Central City. Bill Russell was passionate about history. He preserved Nevadaville’s city hall from falling down, or being taken down for wood.

The Mayhew residence was on the gulch side of Main Street, next to Mr. Mayhew’s quartz hauling business and wagon yard. According to A Concise Social and Business Review of the Three Principal Towns in Gilpin County, written in 1905: “Frank Mayhew—This gentleman is the proprietor of a quartz hauling business and at the present time owns a large number of teams engaged in hauling ore from the mines. He also deals in coal, wood, mine timbers and logging; hauls boilers and engines by contract, and does a general express business. He has been in business here for the last twenty years.”

The church that Mrs. Mildred Zook purchased was the red brick Methodist Episcopal Church on King Street. Her plans to turn it into an art studio were never realized. The church would remain vacant and boarded up. Both the Methodist Episcopal Church and the Mayhew residence appear vacant and boarded up in the 1950’s. In the next episode, we will learn about the rest of Nevadaville in the 1950’s.

The Nevadaville Odd Fellows building that was being torn down in this article was built with bricks brought from Nebraska by ox-teams. According to A Concise Social and Business Review of the Three Principal Towns in Gilpin County, written in 1905: “I.O.O.F. Nevada Lodge, No. 6.—This lodge was instituted September 23, 1868, by Henry E. Hyatt, deputy grand master of the Grand Lodge of Colorado. At first the lodge held its meetings in a rented hall, but later they built a fine brick building, in the second story of which they hold their meetings and rent the first floor for a store room.”

According to geologist and author Terry Cox, in his book Inside the Mountain: “In 1927, 69 years after gold was discovered in Gilpin County, production dropped to a new all-time low of only 1,300 ounces. In 1933, however, the government suspended its mandated price of gold. With the $20.67 per ounce price eliminated, gold sought its own global level. In 1934, the government again reinstituted price controls, this time at $35 per ounce, and mining around Central City made a short-lived comeback. Decline was nonetheless inevitable as the mines depleted the placers, production again fell. Rail service to Black Hawk stopped in 1941, and then in 1943, the Argo Tunnel cave-in halted all production there.”

END_OF_DOCUMENT_TOKEN_TO_BE_REPLACED

Benefitting the county, schools, and much more By Don Ireland   This year marks the 30th anniversary of casinos opening in the former little mining towns of Black Hawk, Central City and Cripple Creek, Colorado. In those early years, smoking was allowed inside ... END_OF_DOCUMENT_TOKEN_TO_BE_REPLACED

Benefitting the county, schools, and much more By Don Ireland   This year marks the 30th anniversary of casinos opening in the former little mining towns of Black Hawk, Central City and Cripple Creek, Colorado. In those early years, smoking was allowed inside ... END_OF_DOCUMENT_TOKEN_TO_BE_REPLACED