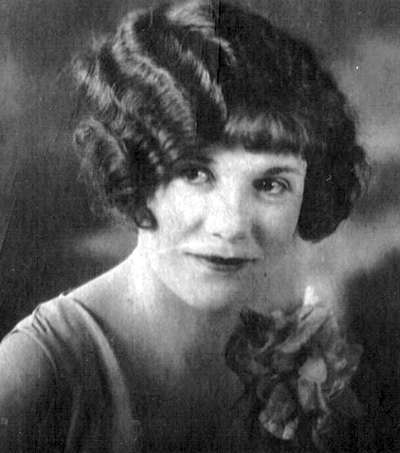 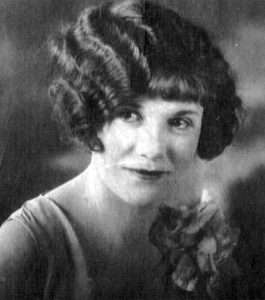 In yet another story told in 1967 by Jack Foster in the Rocky Mountain News, Davis had “the lines of the poem” by H. Antoine D’Arcy “running through his head.” He “went to sleep in his room at the Teller House, awoke at 3 a.m., stole down to the bar and, by the light of a candle held by a youth who worked at the bar, painted that face. Davis refused to say who served as the model for the portrait, but it probably was his wife, the beautiful Nita Davis.”

Another story alleges that Davis invaded the Teller House late one night after a few drinks and on a dare, painted The Face.

The Face joined a gallery of paintings in the bar. In 1876 and 1877, Charles St. George Stanley, an artist who drew illustrations of mines and mills for magazines of the golden age, painted eight murals from mythology. During the reconstruction of the Opera House in 1932, the newly formed Central City Opera House Association hired Pasqual Quackenbush and Allen True, Denver artists and reconstruction experts, to repair the roof and the innards of the Opera House. Quackenbush restored the frescoes of lush nudes found under the wall-paper in the Teller House bar. Quackenbush added two more nudes later, one in 1932, entitled “Cupid’s Captive,” and the tenth in 1952.

Rocky Mountain Life followed Davis around the eastern seaboard and Caribbean for the ten years after he did the Face. Davis painted a mural for the city of Carlsbad, New Mexico, and then he did a series of mining scenes for the Potash Company of America and one of the blast furnace at Pueblo, Colorado.

Eventually in the fall of 1945, he returned to Denver and it was then that he started the murals in the old Windsor Hotel. He found that someone before him, without knowledge of the Windsor’s gracious history, had painted Mexicans and palm trees on the walls of the Bonanza Room. When Davis told the owners the colorful story of the hotel, they commissioned him to paint a series of portraits of the Denver greats who had frequented the establishment. By August of 1946, he had painted 76 heads around the top of the wainscoting and the work was still unfinished. Then came a series for the Rocky Mountain News of historic buildings of Denver and Colorado. The newspaper chain then sent Davis to Memphis to do the same type of assignment for the Memphis Commercial Appeal.

Herndon Davis “did not go back to Central City to look at the ‘thing,’ as he called the ‘Face,’ until ten years later.” In 1946, Davis returned to Colorado to find the portrait famous, but passed off as an “unknown work from the Gay ‘90s.” Infuriated, he drove to Central City and autographed the masterpiece. Accompanying him, Fred Mazzulla captured the signature on film.

Davis’ signature was immediately removed, “turpentined into oblivion by Teller management” as soon as he left. However, “Davis still didn’t get a dime for his efforts” (possibly because he had already been paid having left the painting supposedly in exchange for his “board and keep.”)

The next year, in May of 1947, great Denver surgeon, historian, and poet, Dr. Nolie Mumey succumbed to the wiles of the Face and penned a poem about the “Face on the Floor” not knowing who it was. This was the only poem truly written about Central City’s “Face on the Barroom Floor.” At the time, little did Dr. Mumey know of the controversy that would surround the “Madeleine’s Face” and how he would become a

character in the story!

Eleven years later, Fred Mazzulla’s photograph appeared in an article authored by Louisa Ward Arps in the 1968 “Denver Westerner’s Brand Book.” Arps’ article was about the “Gravity Tram of Gilpin County,” but was adorned with favorite views of Central City.

The Painted Face on the Floor

Not in sleep or in death

Does it quietly lie,

The painted face on the floor

Where it meets the eye.

It is not saddened or dimmed

By life’s wasted tears, But hears the print of laughter

The face is softened by locks

Of a silvery white, Painted upon the floor

Under the earthly light.

It tells its story true,

Free from ancient lore, This face which is so lifelike

Painted on the floor.

Without tragedy in life,

Nor sealed by doom, The beaming face reflects

Gaiety in the room.

The forehead is high set

In style and grace,

Of a resolute face.

The chin is not strong, yet

It is not classed as weak, The eyes are alert and lips

What mystery lies there, What glory in store,

What the thoughts of the face

Painted there on the floor?

Could it take wings and fly

In a simulated flight,

It would bring many people back

For a merry night.

Bidding them all to partake

Of the good in life’s store,

Could we draw the curtained years

Of success and defeat

Among all who came, many friends

Of the face we would meet.

Let hatred be deflected from all

Who enter the door

When they look upon the face

Painted on the floor.

6:00 p.m. After looking at a human face painted upon a floor.

The stories tell that Davis managed to keep the identity of his model secret until his death on November 7, 1962. He died at age 61 while working on a massive historical mural for the Smithsonian Institution.

The “truth” had been told to two friends, Denver lawyer/ historian Fred Mazzulla and Dr. Nolie Mumey, who promised not to reveal it as long as Davis lived. But in his obituary, “Death of the Artist yields Secret to ‘Face on Barroom Floor,” the “truth” came out. Apparently the two pals had asked Davis to replicate the painting on one of their floors and they claimed that Davis refused saying, “That’s my wife, you don’t want a picture of my wife on your floor, do you?” Davis then painted the faces of the men’s wives! Another article did not mention his retort, simply that he painted his friends’ wives’ portraits.

Davis painted a number of portraits in downtown Denver. A.B. Wade, owner of the Keg Saloon, a favorite haunt of newspapermen and Herndon Davis, wanted a face in his bar, and so Davis painted Wade’s face on a stool in the saloon. One story says that the stool idea was Wade’s because “he wanted everyone to sit on his face.” Davis also painted a picture of the bar and A.B. Wade standing behind the bar.

In 1957, Jack Foster, columnist for the Rocky Mountain News, said “it is often said that the model for the face was Davis’ wife, Nita, but the artist never has admitted this.”

One reporter theorized that by maintaining secrecy, Davis was trying to avoid an argument with his wife who was opposed to drinking and to bars and “wouldn’t admit that her husband had no such opposition.” He may have also wanted to skirt an inevitable skirmish with his Madeline’s husband and children years later.

Edna Juanita Cotter Davis was “sore as a boil” at her husband for supposedly confiding in his cronies that she was the mysterious “Madeline.” To her dying day on October 31, 1975, at age 85, “Nita” denied that she was the “drinking world’s favorite Mona Lisa in Central.” She “refused to even look at the painting” and had she gone to Central anyone could have seen that she was telling the truth.

Davis’ cronies probably didn’t want to believe that their pal would have memorialized any other beauty. Even “Nita’s” obituaries heralded her so-called role – “Face on barroom floor model dies in Denver home at 85.” One obituary even had a photo of the “Face” as part of the death notice, certainly the last thing Mrs. Davis would have desired.

The myth had been perpetrated in one of Davis’ obituaries in 1962, which stated, “the portrait, which is of Davis’ wife, was painted with the help of a bottle of rum and bad light for secrecy.” Despite reports to the

contrary, “Nita” certainly recognized that the likeness was not of her, at any age! And, probably because they wouldn’t believe her, she refused to discuss the painting with reporters.

“Off the main lobby was the infamous Teller House Bar with the famous Face Upon the Barroom Floor. Any number of stories about The Face, but the real story (and I have to fight to stand up for what I know.) Back in 1937, two fellows – Herndon Davis from the Denver Post, and Pancho “Frank” Gates, an artist in Central who also worked on the scenery at the Opera House, were drinking in the bar one night, and the subject of the poem came up. So Herndon and Pancho decided the Teller House needed A Face Upon The Floor, so between the two of them, proceeded to paint. A number of people say The Face looks like the wife of Herndon, but as I remember her, no way. The manageress at the hotel insisted that they remove it, but too many people intervened, so it remained.” 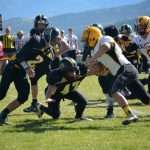 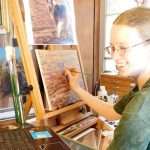