The circus comes to Central City in 1869 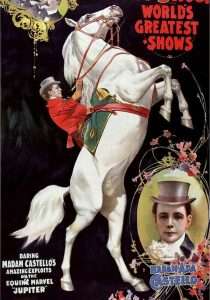 The first circus to cross the United States was famed showman Dan Castello’s Great Show of 1869. After leaving the eastern United States, it eventually arrived in Omaha where it traveled on the Union Pacific Railroad from Omaha to California, beginning its journey on May 27. Making numerous stops along the route, Castello and his circus arrived in Denver on June 3, 1869. The Denver Tribune described the arrival in Denver in breathtaking terms, writing that the parade into town was led by a magnificent golden chariot that held Ollershaw’s Excelsior Brass Band. Next came the elephants followed by the equestrian troupe mounted on finely dressed horses. According to the newspapers, the splendor of the animals was enough to make the “Rocky Mountains groan with jealousy.” The animals were followed by a long string of wagons that held the circus tents and other equipment. Following the wagons were the performers, the most notable of them being the Lawanda family from Brazil, who were well-known for their horse riding abilities and were making their first appearance in the United States. Mr. Sparks was the strong man, or a “modern Hercules” according to the newspaper and Henry Batty, the acrobat, had built his reputation performing in Paris. He was joined by the Carr brothers, who were gymnasts. Rounding out the entertainment were Kent and Merriman, who told “original and grotesque jokes.” Castello himself was both the Master of Ceremonies and a clown.

The Rocky Mountain News was so excited about the circus that it reported on June 2, 1869, that business at the police courts in Denver had ceased, suggesting that those who normally patronized the courts were saving their money for the circus instead. Castello’s Great Show performed in Denver on June 4, 5, and 6 to sold-out crowds. The News raved about the performances, proclaiming that each was better than the one preceding it.

The circus left Denver on the morning of June 8 and headed to Golden to perform two shows. The Colorado Transcript reported that its editors could hardly contain their excitement at the circus coming to town, especially since just the week before they had written a story about circus performances along the Missouri and wondered when they would have an opportunity to see one in the mountains. People flocked to Golden to see the two performances before Castello’s Great Show made its way to Central City on June 9 for a three day stay.

When Castello and his circus arrived in Central City, they set up their tents on Spring Street above the Montana Mill and next to the Hooper Brickyard. Most of the animals were kept at the Sawin and Brother Stable, which nearly filled the building to capacity. Sadly, the “baby” elephant, which was only thirty-eight hands high, was unable to make the trip as it was ill from drinking alkaline water. Castello left the elephant in Denver, where it died on June 10. The Rocky Mountain News was sure that the elephant had “died happy, as we know of no place which he would be likely to leave with less regret.” Carriages took people from the heart of Central City to the circus grounds for free, but charged fifty cents for the return trip.

The circus drew a large crowd the first night it was open, and continued to do so each day it was in Central City. The Daily Register-Call reported on June 11 that it was “wonderfully patronized” and crowded each afternoon and evening, resulting in a very profitable visit for Castello. The newspaper went on to say that “competent judges” declared the Lewanda family’s riding to be “very good indeed.” Equally enjoyable were the “balancing and ball throwing and catching.” Those who attended, reported the newspaper, came away satisfied. After a final performance on the evening of June 11, Castello moved his circus to Georgetown for two days. Central City had been so good to Castello, however, that he returned for two more performances on June 14 on his way back to Denver.

After leaving Central City, Castello’s Great Show traveled to Boulder for one day of performances on June 15 before leaving Colorado. The circus moved onto Utah next, where it performed in Salt Lake City for three days near the end of the month (leading the Rocky Mountain News to write that it guessed “he’ll exhaust that placer.”) Castello’s circus finally reached California on July 17, 1869, and toured the state until late October. After becoming the first circus to travel from Atlantic to Pacific, Castello sold his circus to another group of circus owners and went on to create several other circuses, including one in 1875 that was backed by P.T. Barnum and became the basis for the Ringling Brothers Barnum and Bailey Circus.

END_OF_DOCUMENT_TOKEN_TO_BE_REPLACED

Where the dead get to tell their story By Jaclyn Schrock On Saturday, August 21, the Gilpin Historical Society held their annual Cemetery Crawl. Tickets allowed the shuttle of hundreds of guests from the Teller House parking lot to the Cemetery. Depending on v... END_OF_DOCUMENT_TOKEN_TO_BE_REPLACED