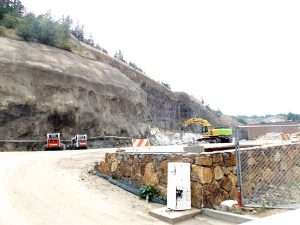 After the Pledge of Allegiance led by Mayor Spellman and a moment of silence for longtime City Council Member and former Mayor Bill Lorenz, City Attorney Hoffmann asked Council to declare any Conflicts of Interest on any issue appearing on the agenda other that than those already disclosed and filed with the City Clerk and Secretary of State. There were no objections.

Terry Feltis and Fred Godin, two new street maintenance folks were introduce during Wednesday’s meeting.  Mr. Feltis started with the City on March 12. Before coming to the City, he worked for CDOT for 11 years. Terry states “I really enjoying working for the City; my co-workers have been great in helping me learn the job. My wife Tammy and I have been married for seven years. We have four dogs and we also foster dogs. I am a Colorado native and like to go 4-wheeling, fishing, boating, and snowmobiling in my spare time.”

Fred Godin started with the City on May 14. Before coming to the City he worked at the Sasquatch Casino, and prior to that with Central City Public Works. Mr. Godin said “The streets crew has been incredible with showing me the ropes and teaching me the job. I have a rescued pot cake dog named Rex. His breed comes from the Caribbean Islands – he’s the best dog. “In my free time I like to go skiing, hiking, and riding my motorcycle. I also like to do ornamental iron work.

Fire Chief Christopher Woolley presented a Memorandum of Understanding (MOU) between the Colorado Department of Public Health and Environment and the City of Black Hawk for Fire Services to the North Clear Creek Water Treatment Plant (NCCWTP). The Colorado Department of Public Health and Environment (CDPHE) operates the NCCWTP located at 6191 Highway 119 in the City of Black Hawk. As the Authority Having Jurisdiction (AHJ), the City of Black Hawk performs fire code reviews, inspections, and final approval of new construction and alterations to the existing facilities at the NCCWTP. The State of Colorado requires the CDPHE to provide a MOU with the local fire authority in which the CDPHE owns facilities. The MOU is to satisfy the State’s requirement of the CDPHE. Black Hawk City Council approved the Ordinance 2018-14 MOU unanimously.

The City of Black Hawk has received an amended application from Dakota/ Canyon, LLC/ Jacobs Entertainment, LLC (applicant) concerning its property located at 131 Main Street related to a proposed parking lot instead of the approved parking garage. This request for Council action serves as an update to the previous Council meeting (7-25-2018) item and report for the Canyon Parking Lot: for a Certificate of Appropriateness (CofA), Site Development Plan (SDP), and Subdivision Improvements Agreement (SIA) for the construction of a parking lot and associated improvements. Staff is working with the applicant to provide an SIA to the City Council in a form acceptable to the staff to be able to make a recommendation to the City Council. This is a revised staff report related to the ‘Canyon property’ and proposed development of a parking lot on the site. The City of Black Hawk has received an application from Dakota/ Canyon, LLC/ Jacobs Entertainment, LLC requesting to amend the January 2018 approved Site Development Plan for a three floor parking garage. On July 25, 2018 the City Council did not take any action except to continue this public hearing since the previously proposed excavated wall treatment with wire mesh from bottom of new cut to top of existing cut, about 125 feet high, seemed not acceptable to City Council. The overall amendment application concerns the deletion of the previously approved three level parking garage from the proposed development and now proposes to instead construct a surface parking lot. This new amendment and now resubmitted application continues to propose demolition of existing walls, major excavation, rock walls, landscaping, and public improvements including a sidewalk along Main Street and street improvements as well as a new very large sign displaying the name of the City – BLACK HAWK along with the City logo. The applicant has now provided two alternative large sign variations each with different ‘lighting techniques’ and ‘size of the letters.’ This revised application submitted for review is for a Certificate of Appropriateness (COA) for excavation of the land under the existing parking lot, hillside and features on the site; a Site Development Plan (SDP) for the construction of the new parking lot, retaining walls, landscaping, and grading and now large signage. Currently the applicant has a contractor on the site and excavation has already started with a permit from the City to do so. The SDP, as currently proposed, utilizes the two (2) approved variances (Resolution No. 3-2018 approved on January 24, 2018) to the existing zoning standards (GOLD District standards) including the required front yard setback and the required landscape buffer in the setback. As for the Subdivision Improvements Agreement (SIA), it is still in the review stage with the City and the applicant. There are two alternatives proposed for the private improvements (including the new sign) that affect the surety amount shown on the Exhibit C in the SIA. Staff and the applicant are still working to complete the SIA agreement as well as the cost estimates to go along with each alternative. The approval of Resolution 50-2018 will satisfy three conditions; a Certificate of Appropriateness, a Site Development Plan, and a Site Improvement Agreement. Black Hawk City Council, Mayor Spellman and staff prefer the sculpted shotcrete over any other option set-forth by the applicant. The applicant sited that the shotcrete option is expensive, estimates range from $1.4 to 1.5 million dollars, and is time consuming taking into accounts that fall is coming up quickly and there’s not a whole lot of time left. Mayor Spellman offered up an option to rebate the applicant $300,000 over the next five years to offset the costs of the more expensive option. Black Hawk has “Share Back” program in the City code, that if approved, the City is authorized to share back a portion of the sales tax collected on properties owned by the applicant. In this case it will be lodging sales taxes on The Canyon and the Gilpin Casinos and Hotels. Alderman Bennett expressed his concerns about the loss of revenue if the total lodging taxes don’t add up to the $300,000 rebate over five years. With that Mayor Spellman requested that Finance Director Lance Hillis and City Manager Jack Lewis look into the amount of sales taxes collected on these properties and provide this information to City Council before a decision on the Share Back money can be made.

Mayor Spellman also asked the Council members how they felt about the sign with the Black Hawk logo. The majority of the members were either neutral or against the sign. Due to its unpopularity, the addition of the sign on back wall was removed from the request.

Black Hawk City Council did not take any action and made a motion for continuance of the Public Hearing on Resolution 50-2018 until the next meeting on August 22, 2018

Resolution 51-2018 is a Certificate of Appropriateness for an Amendment to the Comprehensive Sign Plan for the Lodge Casino. On May 29, 2018, the City of Black Hawk received an application for a Certificate of Appropriateness from Angela Renfro of BSC Signs on behalf of The Lodge Casino. The application proposes an Amendment to the Comprehensive Sign Plan (CSP) for the Lodge Casino property at 240 Main Street in Black Hawk. The amendment proposes to remove one existing sign and replace three other existing signs. The changes will promote the brand change to the Lodge logo and will replace a failing LED board with a new board. The current Certificate of Appropriateness for the Lodge Casino Comprehensive Sign Plan was previously approved on July 23, 2014 by Resolution No. 53-2014 which included 535.46 square feet of sign area. The recent submittal proposes 621.1 square feet which is a net increase of 85.68 square feet, or a 16% increase. The property is allowed 1,781.60 square feet of sign area. Black Hawk City Council approved Resolution 51-2018 Unanimously.

END_OF_DOCUMENT_TOKEN_TO_BE_REPLACED

Benefitting the county, schools, and much more By Don Ireland   This year marks the 30th anniversary of casinos opening in the former little mining towns of Black Hawk, Central City and Cripple Creek, Colorado. In those early years, smoking was allowed inside ... END_OF_DOCUMENT_TOKEN_TO_BE_REPLACED