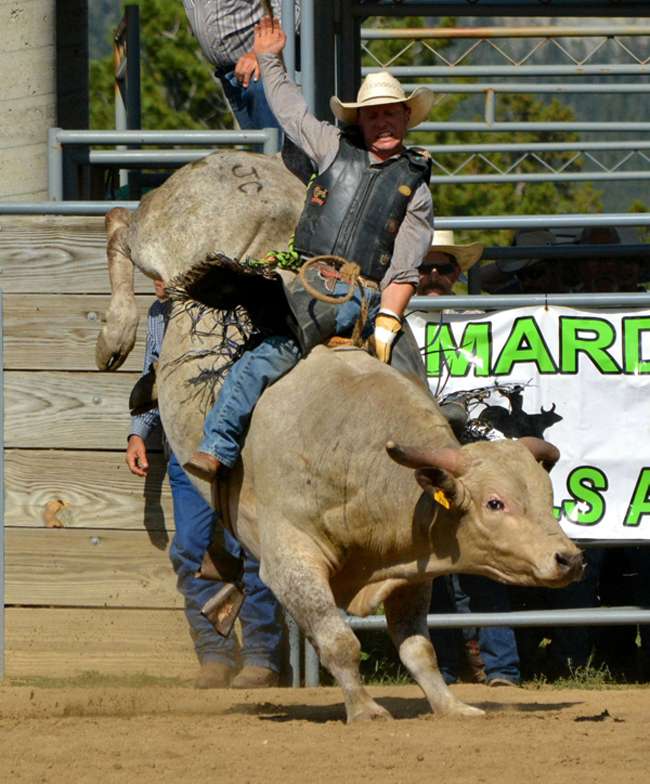 The bulls won. None of the more than 30 cowboys and cowgirls stayed on for the full 8 seconds to get points for their efforts at the 2017 Mardi Gras Bulls and Beads Rodeo. Points from these Ford Rodeo Series are accumulated for the grand total winner later this year. The event filled the grand stands, and the extra bleachers near the cowboy entrance where their support crews watched with their dogs and little ones all had high hopes for a safe, great ride. These same cowboys travel and compete in the series of rodeos and encouraging each other to ride their best, and keep the crowd on the edge of their seat.

Saturday, August 19, about 4 pm the announcer called for the opening of the Mardi Gras Bulls and Beads Rodeo at Gilpin County’s 25th annual Fair, saying one thing cowboys traditionally do is to honor America. One pick-up rider rode the arena with an American flag flying and another with a Colorado State flag. All who could hear the announcer were asked to stand and remove their “head covers” in respect of cowboy’s love of our country as a gal from Golden sang our National Anthem in a clear compassionate voice. We all were appreciating the nation we live in, when the microphone cut out over half way through the Star Spangled Banner. Without losing a beat, the Gilpin County crowd continued the rest of the song together. It was quite a show of the impact the song brings and the power of unity!

So, the bull riding immediately began without an announcer telling about the rider or the bull. A few comments were able to be broadcast from the headset on the clown protected by the barrel. This handful of bull rider clowns may entertain us, but their primary job is to keep animals and all those in the arena safe, with each massive bulls putting on his show. Each of the four gates had at least six additional helpers to work the shoots, two on the gate and four that got the bull into the gate and assisted the rider to mount the bull. Courageous, well prepared cowboys took the challenge to stay on these bucking bulls to earn a score on an 8 second ride once they gave the signal that they were ready. The bulls are rated for their feisty behavior to add to the score the rider earns for following rules.

Each cowboy at the 2017 Mardi Gras Rodeo fell to the ground within seconds of giving the signal to start the timer. Two riders came close to staying on their bull the full 8 seconds. Some bulls bucked hard while in the shoot, one even tried to climb over the fence before letting the rider sit on his back. Some bulls got in the gate, but were released without a cowboy riding them. Once a bull bucked off their cowboy who usually was left lying in the dirt, the clowning helpers were very quick to chase the wild hooves and heaving mammoth away from the fallen rider. These extra helpers brought safety to the limping or banged up riders. If needed, they helped them get to the rail or climb over to get distance from the mass of flailing muscle and heavy weight the bulls showed of themselves. Many cowboys were able to get to a safe place on their own, perhaps with bruised bodies and pride. The Gilpin County crowd did all they could to show appreciation for the first 10 bull rider’s efforts to ride with cheering, clapping, groans, and whistles.

The three pick-up riders blue shirts, red scarves and chaps rode on experience cow horses, and after the ride was finished, chased the bulls back into the shoots to send them back to their pen. The pick-up cowboys used lassos or one rider on each side of the bull trying to guide them to the open gate to return to their pen. One black bull refused to leave the arena. He stubbornly dug his feet in the ground and refused to budge while a rope on him was pulled by a horse who could not get him to budge. They tried slapping him on the back side, and pulling on his tail to encourage him to move. Finally, with two ropes pulled by two horses, he finally moved toward the gate with resistance.

Moving the rodeo events on to smaller animals, eight local kids took the challenge to ride and hang onto sheep for another round of mutton busting. The sheep that were sheered were a real challenge to hang onto with not much wool once the cowboys helped the youngin’s get mounted and the sheep began running. Lots of crowd support offered for these brave ones.

Back to the animal athletes, the crowd cheered to watch the bucking broncos enter the arena that were getting their turn to be ridden by the cowboys. Tanner West was the first up from Wyoming. The flexibility and strength these cowboys showed was absolutely incredible. Those horses, like some of the bulls, seemed to have springs under their hooves to jump up with all fours off the ground with arching backs. One horse reared up so far to get the rider off it seemed they were going to do a back summersault. The riders seemed more like spaghetti noodles slipping around on the horse before the horn blew to show they had scored a ride. Not every rider was able stay on until the horn blew. The first bronc rider after half time, Sutton Jepsen, rode his bucking horse straight out of the gate across the arena. The camera in my hand could not be used for that incredible site, as I was not sure he was stopping at the fence that separated me from them. I saw Sutton grabbing onto the pick-up rider to get off the horse that made possible a score to tie for second place.

After another round of young neck-clinging mutton busting kids finished, professional bull riders returned to the arena. These riders were not the same young cowboys as earlier. These were the 40 and over cowboys. The old timers wanted to ride again having had previous experience remembering the glory and also, recovering from other rides. One of five riders did get taken out in the ambulance having gotten a hard hit to the head. Even though the bull rider was wearing a helmet, he was still stunned with the powerful blow from the bull. Just like the young whipper snappers, none rode long enough to score a ride to be counted for the final talley.

The half-time show’s clown, Byran Murphy, brought gasps of wonder from the crowd. He and the clown in the barrel for the bull-riding, entered the arena in the oddest 1931 Model A pickup truck. When he kicked the front tires to check out if it was worthy of purchase, the whole front axle rolled out from under the truck. When the truck didn’t start again, they opened the hood and a girl jumped out leaving an empty engine compartment. The truck tipped back on its two rear wheels and was able to be start up again according to the announcing, hoping to be driven off the arena, eventually. First it had to spin around and around on its two rear tires spitting fireworks and flames. Then the barrel clown decided this was not a truck for him to purchase and ran off. That left our show clown to make the truck appear to level itself out and wave at the crowd with its front end before leaving the arena. There were a few head scratching confused folks in the crowd trying to understand what just happened.

At least four more bucking bronco riders attempted their rides, some doing better than others. Next we enjoyed the excitement of about 15 more bull rides. Some got really close to the 8 second mark, but still none made it that far. So, all the bull riders their entry fees returned. The last round of bronco riders included a re-ride that scored well.

The appreciation carriage rides followed for those who helped make the fair a memorable event. The closing of the fair on Saturday was followed by the bon fire, hot dogs and then the Mardi Gras Casino hosted the awards for this year’s rodeo. No bull rides received awards, but some of those cowboys also rode the broncos.

Congratulations to Ranch Bronco Riding 1st place winner Max Strelec. There was a surprising three-way tie for 2nd place between Tanner West, Sutton Jepson, and Wesly Rosengreen. Congratulations and good luck in the next rodeo!

JD Ford is the contractor from northeast of Brighton who provides most of the animal athletes brought to the rodeo. His rodeos draw cowboys eager to be challenged. JD runs a tight ship and has great respect from arena staff and cowboys for facilitating his part of many rodeos. Greg and Carolyn Talbert are Ford’s subcontractors who brought 10 of their bucking bulls from Cheyenne Wells, Colorado.

TLC Bucking Bulls may not be a “wise” way to earn money, but it is their passion and great love to raise cattle in the small farming community producing mostly wheat, corn, millet and sunflowers. They bring bulls to events year round. Last year Talbert Land and Cattle (TLC) Bucking Bulls spent 34 nights in Las Vegas caring for their bulls used in the National Finals Rodeo.

TLC allows their bulls to mate with the cows, once a cow gets the attention of the bull. The cows are often too hard to handle to give artificial insemination. It is better to let nature take its course. To raise bulls for the three years old before cowboys and judges can really appreciate them takes a lot of work. Each bull is given 16 pounds of grain a day, eight pounds in the morning and eight pounds at night. Each day they are exercised in a pen, being encouraged to move by ATVs rather than saddling up and caring for a horse too. Twice a week, they are taken to their arena to practice running through the shoots. There are currently about 75 bulls at TLC Bucking Bulls. Professional bull riders have echoed that “these bulls are bred better than the riders,” according to one 8-time pro bull rider. The best bull they brought to Gilpin County this year is called Pop Knot.

Our community offers thanks to these folks for a job well done.

END_OF_DOCUMENT_TOKEN_TO_BE_REPLACED

Benefitting the county, schools, and much more By Don Ireland   This year marks the 30th anniversary of casinos opening in the former little mining towns of Black Hawk, Central City and Cripple Creek, Colorado. In those early years, smoking was allowed inside ... END_OF_DOCUMENT_TOKEN_TO_BE_REPLACED

Benefitting the county, schools, and much more By Don Ireland   This year marks the 30th anniversary of casinos opening in the former little mining towns of Black Hawk, Central City and Cripple Creek, Colorado. In those early years, smoking was allowed inside ... END_OF_DOCUMENT_TOKEN_TO_BE_REPLACED