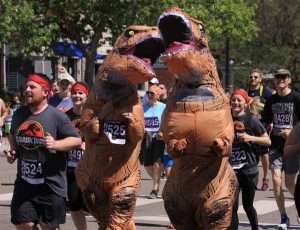 Mamita Daska of Ethiopia took first place in the Women’s Elite 10K with a time of 32:44.84. Ethiopia also placed second. Gabriel Geay from Tanzania won the Men’s Elite 10K coming in at 29:02.19, just .62 seconds ahead of Leonard Korir of the U.S.A. As predictable as East Africa sweeping the pro races was the zaniness that surrounds the Memorial Day event. With rock bands seemingly on every corner, Wonder Woman, Roman soldiers, dinosaurs, clowns, a Tootsie Roll, a slice of bacon, a unicorn, a shark, and a flamingo were among the throng. Others wore their running clothes, patriotic garb, a colored wig, or a tutu. Fifty thousand runners turned out to pay tribute to fallen soldiers at Folsom Field, where the race concluded with an F-16 flyover and skydivers bearing the flags of each branch of service.

END_OF_DOCUMENT_TOKEN_TO_BE_REPLACED

Benefitting the county, schools, and much more By Don Ireland   This year marks the 30th anniversary of casinos opening in the former little mining towns of Black Hawk, Central City and Cripple Creek, Colorado. In those early years, smoking was allowed inside ... END_OF_DOCUMENT_TOKEN_TO_BE_REPLACED