The big one that didn’t get away 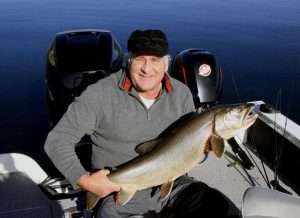 Bernie Keefe has been guiding fishing trips in the Granby area for twenty years. Well-known and respected, he knows the best spots and techniques to land big fish on Lake Granby better than anyone. Following are some of his thoughts and observations about the lake:

According to Bernie, “Lake Granby holds rainbow trout, brown trout, Kokanee salmon, suckers, and lake trout (also known as Mackinaw). The rainbows and salmon are stocked every year and the other species reproduce naturally. Kokanee were first stocked in the late 1960s and lake trout in the 1970s. In an effort to produce fisheries containing 4 – 6 lb. salmon, mysis shrimp were introduced as a food source to reservoirs and lakes throughout the west including Granby. Unfortunately, that decision proved disastrous. The Kokanee salmon rarely come in contact with the mysis shrimp because the shrimp live deep in the water column where the salmon aren’t and only come up at night in cold water to eat zooplankton. They do not leave any zooplankton for the salmon, therefore the salmon either starve to death or the lake trout devour them before they’ve grown to size. When bodies of water with mysis experience a drought, the salmon do well and get very large, but the last time that happened was 2002 – 2005.

Colorado Parks and Wildlife (formally known as the Department of Wildlife) has been managing this problem in a variety of ways. In the past we had slot limits on lake trout, but with the salmon crash they removed the slots and instituted a limit of four lake trout of any size. Today, under no legal obligation, conscientious anglers don’t keep any lake trout over 19 inches. The long-lived, slow-growing lake trout have seen several boom and bust cycles through the years and need all the help they can get.

The CPW is now stocking Hofer rainbows in Lake Granby. These fish came to the US from Europe as a whirling disease resistant strain of rainbow trout intended for rivers. It was discovered that they are also a deep water pelagic fish that are capable of replacing salmon as food for the lake trout. Beneficially for Kokanee salmon, they consume vast numbers of mysis shrimp. Last year over 200,000 and this year over 400,000 fingerling Hofers were stocked with a hope they will survive and grow quickly. The fingerlings generally attain a length of 9” within a year of being planted.

The added forage has made the lake trout body condition very healthy lately. It has also greatly improved the brown trout body condition. The brown trout we are catching are very fat with quite a few over 20 inches – I have always thought Lake Granby was an underrated brown fishery. Latest fishing report: With all the food in Granby, the large fish are a little tougher to catch, but when you do get one it will be in great shape.”

I’ve fished with Bernie four times over the past five years in quest of a trophy lake trout. Although we always landed decent size lake trout up to 12 lbs. and smaller trout sometimes in great numbers, I had yet to bring aboard the fish of my dreams. I would have another chance this year when Bernie contacted me about a last minute opening in his schedule. Only three days after “ice out,” and the earliest I’d ever fished Granby, April 12th was my opportunity to try again.

To avoid departing my house at 3:30 in the morning, I opted to spend the night sleeping in my vehicle at Stillwater Campground. At 5:45 a.m. sharp, Bernie had already launched the boat and was waiting for me to board. After a short time casting an orange-and-brown Rapala lure, I hooked a 12 lb. lake trout! While it was a nice fish, it didn’t surpass my personal record. A half hour elapsed with no more strikes so we switched to a heavy jig that resembled a dill pickle. The big trout that we saw on the fish finder eying it were curious but unwilling to take the bait. Bernie then decided to break out one of his secret weapons: a strip of black rabbit fur that looked like a foot-long leech. Slowly trolling it for ten minutes, I had a hit! I missed the strike, but that was quickly followed with another. Usually when you miss the first strike, another strike never comes. I got lucky and set the hook. I could tell that it was no ordinary fish by the bend in my rod. Upon my 28th hour of fishing with Bernie, I finally had the big lake trout that I sought on the end of my line! As good as it felt, there was still a small matter of netting the monster. A vigorous battle ensued on light tackle until Bernie scooped it up and laid the fish on the deck. At thirty-six inches long and twenty-two pounds, all of the hours and dollars spent were well worth it! Safely released, Bernie estimated that the fish was forty years old. I’m left with a picture, a fantastic memory, and looking forward to my next fishing trip with expert guide Bernie Keefe.

END_OF_DOCUMENT_TOKEN_TO_BE_REPLACED

Benefitting the county, schools, and much more By Don Ireland   This year marks the 30th anniversary of casinos opening in the former little mining towns of Black Hawk, Central City and Cripple Creek, Colorado. In those early years, smoking was allowed inside ... END_OF_DOCUMENT_TOKEN_TO_BE_REPLACED

Where the dead get to tell their story By Jaclyn Schrock On Saturday, August 21, the Gilpin Historical Society held their annual Cemetery Crawl. Tickets allowed the shuttle of hundreds of guests from the Teller House parking lot to the Cemetery. Depending on v... END_OF_DOCUMENT_TOKEN_TO_BE_REPLACED